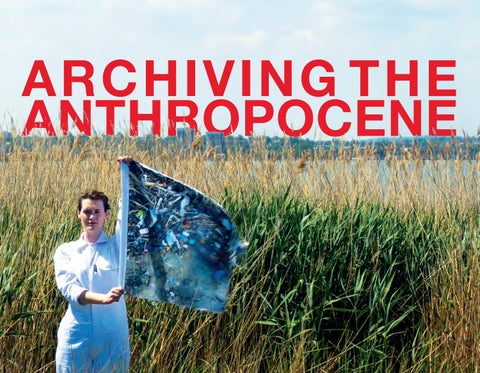 ANTHROPOCENE THIS BOOK DOCUMENTS A VISUAL AND MATERIAL EXPLORATION OF THE CURRENT GEOLOGICAL EPOCH, THE ‘ANTHROPOCENE’. Since the last ice age, collective human activity has been the single greatest accelerator of climate change. The Anthropocene is defined by mass-production, mass-consumption and globalisation. The ubiquitous use of cars, ease of long distance travel and production of waste (particularly plastic waste), has had a profund affect on the environment. Different strands of pollution combine to make a complex problem that is difficult to address, and cyclical in nature. As the physical properties and landscape of the earth change at an alarming rate - due to human negligence and a historical lack of future-proofing, this project is meant as a protest, or a ‘wake up call’. I have approached the broad subject as a personally driven site-specific exploration of coastal erosion, plastic pollution and air pollution - all of which are prevalent in the U.K. and predicted to worsen in the coming years. Through documentation of significant ‘visual metaphors’ at each of the three locations, I have used this rich imagery to inspire a collection of woven dobby and jacquard samples. This book shows the process by which I have arrived at these final samples: I have emulated and accelerated the processes that occur at each of these locations for design purpose. I have ‘dyed’ and designed weft yarns through alternative methods to produce ‘bespoke’ yarns that reflect the locations. Ultimately, the pieces take the form of flags, which are one of the most widely recognised forms of ‘textile communication’. I hope this work provokes a visceral reaction in the viewer and provokes thought and interaction with the theme.

The U.K’s coastlines are changing. As a result of increased ‘freak’ weather patterns, such as storms that lead to huge tidal surges, the coast is under increasing danger of irrevocable flooding and extreme erosion. Sea walls are at risk of collapse and natural rock faces crumble under the force of the waves. This increasingly common extreme weather is caused by global warming: emissions from burning fossil fuels are released into the atmosphere where they trap and absorb solar radiation and heat from the sun. This warming effects our oceans in many ways. Sea levels are rising due to polar ice caps melting, which increases risk of flooding. Oceans are becoming more acidic due to absorbtion of carbon dioxide from the atmosphere, and therefore more corrosive. This poses threat to habitat and inhabitants of both the ocean itself and coastal regions. I have focused my attention on the Dawlish coastline in Devon, U.K. In 2014 the sea wall collapsed beneath the railway line, as a result of stormy weather and tidal surges. Three years on, I visited to explore the changing coast line. The natural rock face is beautifully weathered but shows the scale and force the salty, acidic ocean can have on permeable rock faces. In contrast to the natural red sandstone are the man-made concrrete and stone walls, which also weather, crack and erode. Inspired by the sedimentary layers of rock, crumbling down walls, half-hearted reinforcements and bleeding rust (caused by hydraulic action, attrition, abrasion and solution respectively) I have produced rusted and wrapped paper yarns that explore the fragility of our coastlines. Application of distilled vinegar, water and salt to bare iron wire, iron oxide powder, iron filings and bare copper wire accelerates the process of rusting and gives varying levels of colouration and disintergration to different yarns. Use of iron and copper in combination has given a particularly beautiful effect of combined traditional ‘rust’ oxidation, natural pink-hued copper, and copper verdigris. Finishing processes of abrasion by sandpaper have also been particularly important to the visual language of this ‘story’, as the pieces I have constructed are just as quickly destoryed by my own hands: a metaphor for our actions, perhaps.

Plastic pollution is a scourge of our times. Whilst plastics have revolutionised food preparation and presevation, they have a much longer lasting impact than we once thought. Plastics require a lot of energy to produce; are typically made using finite resources and do not decompose. At worst, plastics enter waterways where they break down into micro-plastics. These pose a serious danger to wildlife and have been found to enter our food chain, where research shows it poses significant long-lasting health risks. Plastics that enter waterways collect in floating garbage patches, and deposit on beaches and river banks. I have focused on the Thames Estuary, where much of London’s waste is transported out of the city to recycling and landfill sites. At Rainham Marshes, the reedbeds are clogged with plastics. Broken reeds, plastic bottles, cotton buds, tampon casings and food packaging form an insperable mass. The surrounding industrial landscape and marshland stands as a metaphor for production and waste in society. Using plastic collected at Rainham, I have produced ‘forensic’ style layouts that highlight and document plastic pollution. These layouts have been jacquard woven to give a photographic effect. Much plastic waste is highly recognisable: for example food packaging, whilst other less recognisable plastics turn to shreds. This disintegration into ‘shreds’ and ‘mico-plastics’ informed my weft yarn design. To produce ‘polluted’ yarns, I have fused hand-cut strips of found plastic to paper yarns (chosen to represent the paper-like, rustling feel of reed beds). This refers to the mixed and inseparable nature of plastic from this environment. I have used these yarns in combination with coloured polyester/cello mix yarns to give a plasticised effect. Polyester remains one of the highest polluting yarns in terms of washing - microfibres from clothes also enter our waterways in the same way as micro-plastics. Additionally, I have hand-cast resin rods that encapsulate found plastics (again, from Rainham Marshes) in red, yellow and blue. The plastics appear to float in the resin - making reference to the plastic world-wide floating in our oceans and waterways. Whilst polluting in itself, the resin highlights the permanence of plastic and I hope encourages the viewer to consider their own personal use of plastics: the less plastic we each individually use, the smaller the issue. The cast resin rods mirror the colouration of the ‘forensic layout’ pennant flags pictured in the next pages. The use of primary colour refers to inital reseach into maritime semaphore flags that are used to signal messages to other ships. Considering the location of the marshes, use of bold (found) primary colour to produce textiles designed to warn against the dangers of plastic pollution seems fitting.

Air pollution is a problem that affects the world-over. The burning of fossil fuels releases harmful particulate matter into the atmosphere, but it affects us all at ground level. In London particularly, we regularly exceed ‘safe’ levels of air pollution. My attempt to document air pollution across London initally began with an experiment, where hanks of pristine white yarn were placed in areas of specifically high PM10 particle concentration in an ‘episode’ of extremely high level air pollution in January 2017. After only a week, some significant colouration had occured, especially on hanks placed in areas near busy roads. The darkest hank seen on earlier pages was placed outside a high-rise flat above a taxi rank in Westminster. This association with air pollution and traffic is something widely recognised, and widely protested. This inspired me to use the colloquial, accessible language of ‘dirty van grafitti’ to communicate my warning messages. Highlighting the build up of dirt and pollution on white vans - a symbol in our society, where we are dependent on road transport, and the ‘white van driver’ is preconceived as reckless - I took hanks of different yarn types and used them, in essence, to clean white vans. This pollutes the yarns and gives an ikat space-dyed effect with varying grey colouration (depending on the dirtyness of the van). I also burnt wood to produce charcoal in order to obtain darker tones of ‘pollution’. This was very messy in itself, using a pestle and mortar to crush charcoal into a fine powder - and continues to come off the weaving now. This transferral of dirty ‘particles’ from the unfixed van dirt and charcoal yarns are a metaphor for the lingering and transfer of polluting particles in the air into our airways.