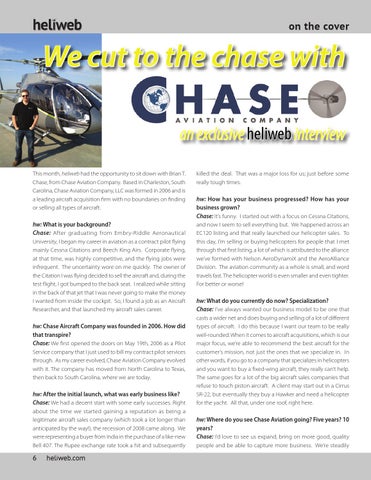 We cut to the chase with an exclusive heliweb interview This month, heliweb had the opportunity to sit down with Brian T. Chase, from Chase Aviation Company. Based in Charleston, South Carolina, Chase Aviation Company, LLC was formed in 2006 and is a leading aircraft acquisition firm with no boundaries on finding or selling all types of aircraft. hw: What is your background? Chase: After graduating from Embry-Riddle Aeronautical University, I began my career in aviation as a contract pilot flying mainly Cessna Citations and Beech King Airs. Corporate flying, at that time, was highly competitive, and the flying jobs were infrequent. The uncertainty wore on me quickly. The owner of the Citation I was flying decided to sell the aircraft and, during the test flight, I got bumped to the back seat. I realized while sitting in the back of that jet that I was never going to make the money I wanted from inside the cockpit. So, I found a job as an Aircraft Researcher, and that launched my aircraft sales career. hw: Chase Aircraft Company was founded in 2006. How did that transpire? Chase: We first opened the doors on May 19th, 2006 as a Pilot Service company that I just used to bill my contract pilot services through. As my career evolved, Chase Aviation Company evolved with it. The company has moved from North Carolina to Texas, then back to South Carolina, where we are today. hw: After the initial launch, what was early business like? Chase: We had a decent start with some early successes. Right about the time we started gaining a reputation as being a legitimate aircraft sales company (which took a lot longer than anticipated by the way!), the recession of 2008 came along. We were representing a buyer from India in the purchase of a like-new Bell 407. The Rupee exchange rate took a hit and subsequently

killed the deal. That was a major loss for us; just before some really tough times. hw: How has your business progressed? How has your business grown? Chase: It’s funny. I started out with a focus on Cessna Citations, and now I seem to sell everything but. We happened across an EC120 listing and that really launched our helicopter sales. To this day, I’m selling or buying helicopters for people that I met through that first listing, a lot of which is attributed to the alliance we’ve formed with Nelson AeroDynamiX and the AeroAlliance Division. The aviation community as a whole is small, and word travels fast. The helicopter world is even smaller and even tighter. For better or worse! hw: What do you currently do now? Specialization? Chase: I’ve always wanted our business model to be one that casts a wider net and does buying and selling of a lot of different types of aircraft. I do this because I want our team to be really well-rounded. When it comes to aircraft acquisitions, which is our major focus, we’re able to recommend the best aircraft for the customer’s mission, not just the ones that we specialize in. In other words, if you go to a company that specializes in helicopters and you want to buy a fixed-wing aircraft, they really can’t help. The same goes for a lot of the big aircraft sales companies that refuse to touch piston aircraft. A client may start out in a Cirrus SR-22, but eventually they buy a Hawker and need a helicopter for the yacht. All that, under one roof, right here. hw: Where do you see Chase Aviation going? Five years? 10 years? Chase: I’d love to see us expand, bring on more good, quality people and be able to capture more business. We’re steadily

The April 2014 interactive edition of heliweb. 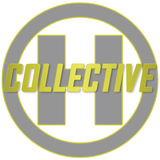