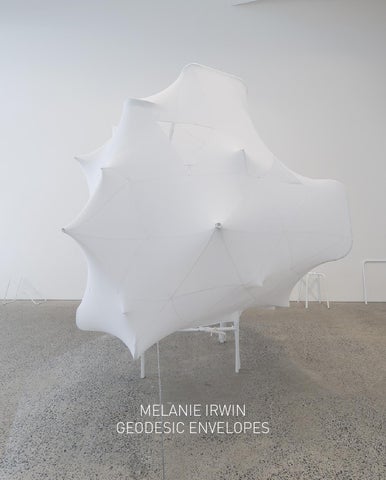 MELANIE IRWIN GEODESIC ENVELOPES  he sphere does not possess the rational beauties of geometric T volume, but it offers the great securities of a belly.1 — Gaston Bachelard

Geodesic Envelopes emerges from Melanie Irwin’s interest in how our bodies relate to everyday objects and the urban spaces we inhabit. This and other questions that underpin her practice may be philosophical—what is the difference between me and this table? what is the order of things? what is the difference between the infinite and the measurable?—but her way of solving problems is physical and material. She explores the body’s interaction with things over time. As part of a repetitive series of actions resulting in a floor drawing, in one of her earliest performance sculptures, Untitled (Action_ Structure_Drawing), 2008, Irwin tied herself over several hours into an aggregation of boxes—modular units made of bamboo chopsticks— until she was unable to get back to her feet. The task required flexibility and adaptability, and she found that she intuitively worked to make movement easier, as the ever-growing structure overtook her body like a construction scaffold.

Such performative interactions with objects replicated situations in everyday life that also inspired later works. For instance, a spatiotemporal line drawing, The Appendages (Red), evolved out of a regular activity for Irwin—publicly carting around stuff for her work that she had salvaged from hard rubbish. The delegated performance involved up to fifty people bringing an object Irwin had given them —a metal ring or a frame that Irwin had powder-coated bright red— to an exhibition opening at the Victorian College of the Arts, carrying them around the exhibition and taking them away when they left, creating a dynamic drawing through the movement of their bodies. In holes or bumps where rivets or screws may have been, these linear forms retained the traces of their former lives as parts of utilitarian objects: chairs, garden hose reels, display stands, etc. Anticipating the whitened objects in Geodesic Envelopes, they formed a unified though disconnected group, ‘rejuvenated from scrap metal to clean linear fragments’,2 wherein bodies were incorporated into networks of geometries and into the spaces of abstract painting. Some participants returned their Appendages to Irwin several months later at Heide, where she carried them around at the opening of her exhibition. Again using their bodies and parts of everyday objects collected by Irwin from hard rubbish and junkyards, the performers in Geodesic Envelopes attempt to activate the spherical dimensions of a large costume of stretchy fabric. The resulting forms, in which objects protrude from inside this membrane, contrast with the immediately preceding sculptural series, Distension, 2011–13, in which elongated mobility aids pressed in from the outside against large ballooning forms made of stretchy chloroprene, soft stand-ins for bodies. Geodesic Envelopes has another static precursor in Aggregate Elasticity, shown in 2012 in an artist-run space in Brunswick, in which Irwin had tried to create a spherical form by pinning stretch fabric over a conglomeration of broken fragments of furniture she had collected from Brunswick streets, effectively encapsulating clutter in a makeshift body. 10

However, Geodesic Envelopes signals a new direction that is not reliant on the aesthetic choices that were unavoidable with these earlier works, as Irwin assembled and disassembled and stood back to adjust and produce forms she would be satisfied with from all angles—the traditional sculpture-making process. Geodesic Envelopes is structured so that the performers work almost blindly to the sculptural outcome and the artist is liberated from formal decisions. ‘We try to produce a sphere, but we’re guessing most of the time about how the form must look from the outside. There’s no objective perspective for us while we’re making the work, there’s no standing back or walking around it, we’re literally inside it’.3 As Jane 12

Bennett proposes, it is ‘not so much a doer behind the deed as a doing and an effecting by a human-nonhuman assemblage’.4 This approach to matter aligns with Irwin’s use of discarded objects in a world of surfeit and overproduction. Bennett again: ‘there was never a time when human agency was anything other than an interfolding network of humanity and nonhumanity; today this mingling has become harder to ignore’.5 As well as enfolding human and object in the performance, Geodesic Envelopes integrates the organic and the geometric within the fabric membrane itself. Sewn from triangular Lycra and mesh panels, this spherical envelope is a soft version of a geodesic dome made famous by architect Buckminster Fuller, and initially appears like a ghostly white costume worn by the performer. Over several hours the performer, while staying inside the costume, stretches it over the objects into ever-changing and ever-expanding abstract conglomerations that look like experimental structures for living: protective, isolating or modular architectural forms. Their efforts to achieve a spherical shape are doomed to failure, anticipated perhaps by the idealism of Fuller’s iconic twentieth-century design, which he intended as a model for resilient, affordable and ecologically sound housing. The relationship between the potential sphere created by the performer and the octagonal platform marked in white chalk on the floor points to another impossibility, that of measuring a circle, a form that remains ideal. Irwin’s work references Archimedes’ third-century-BCE approximation of the number pi (π), which is used to calculate the circumference of a circle. His idea of measuring the perimeter of two polygons, one slightly smaller than the other, to determine most accurately the circumference of a circle that lay between them, was to Irwin an almost physical way of understanding an indefinite abstract concept. Her explorations of geometries are likewise physical, as she explores the active agency of our bodies and their capacity to adapt to changing, demanding and constrictive circumstances.

The elastic fabric membrane worn by the performers is analogous to the skin or the stomach, and responds to the rigidity of the metal objects. After she had made the first one or two of these sculptures, Irwin, a mother, realised that ‘there was something there about the sensation of being inhabited and kicked against from the inside’. She was interested in philosopher Peter Sloterdijk’s description of women’s bodies as ‘“apartment buildings” in the way that they house their progeny, this blurring of the body and architecture’, as well as in the body’s elasticity and resilience.6 Indeed Sloterdijk describes the various habitats that we construct as spatialised immune systems, artificial containers or technological envelopes designed to protect us from the vast emptiness of the cosmos, ever since modernity removed the securities, or safety structures, of theology and Platonic cosmology. To Sloterdijk, life is a matter of form (for example, a mother and child, or a patient and analyst, are a dyadic ‘bubble’); and living means building spheres —to him both a philosophical and a geometric term—both on a small and a large scale. In the performance–sculpture Geodesic Envelopes, a person inside their own constructed yet responsive sphere of immunity encapsulates both the isolation of contemporary life and the potential for interconnection and transformation. Linda Michael Deputy Director / Senior Curator Heide Museum of Modern Art NOTES 1 Q  uoted in Peter Sloterdijk, Spheres: Volume I: Bubbles, trans. Wieland Hoban, Semiotext(e), Los Angeles, CA, 2011, p. 99. 2 M  elanie Irwin, in conversation with the author, 16 January 2014. 3 M  elanie Irwin, email to the author, 19 February 2014. 4 J ane Bennett, Vibrant Matter: A Political Ecology of Things, Duke University Press Books, Durham, NC, 2010, p. 28. 5 J ane Bennett, Vibrant Matter, p. 31. 6 M  elanie Irwin, email to the author, 19 February 2014.

ACKNOWLEDGEMENTS The artist would like to acknowledge all of the dedicated performers who have physically activated the Geodesic Envelopes, including Louis Balis, Alessandra Barone, Danica Chappell, Emma Collard, Georgie Glanville, Klara Kelvy, Mia Salsjo, Andrew Treloar and Ben Woods. Thanks also go to everyone who carried an Appendage. She is also grateful for the generous support and assistance of Linda Michael, the front-of-house and installation teams at Heide, Kate Just, Leanne Hermosilla, Jeni Irwin, Greg Sawka and Emilia Sawka. Irwin’s performances were supported by an Australian Artists’ Grant, a NAVA initiative made possible through the generous sponsorship of Mrs Janet Holmes à Court AC and the support of the Visual Arts Panel, Australia Council for the Arts. Linda Michael thanks Melanie for her thoughtfulness in developing this project, and her commitment and time to ensuring its success over an extended period. Thanks also to Heide staff, particularly Stephanie DiBattista and the front-of-house team, Tristan Main, Nicole Kenning, Rebekah Oh, and Rebecca Renshaw for their work on this project. 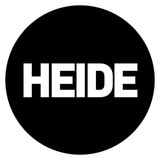