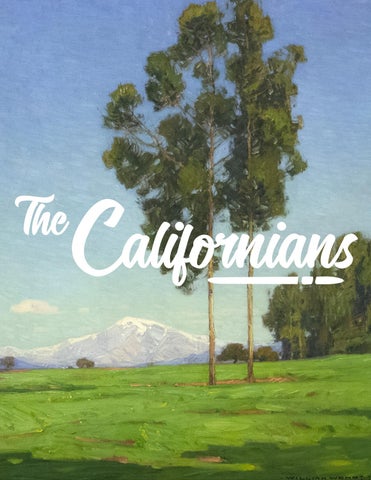 Heather James Fine Art presents in its gallery in Palm Desert, California an exhibition examining the diverse art and artists of California from the first fifty years of the 20th century. Since its inception, California has captured the hearts and imaginations of artists and has provided fertile ground for inspiration. Whether Californians by birth or by choice, these groups of artists showcase the astounding range of vision and technique from American Regionalism to figural abstraction. The exhibition focuses mainly on the unique vision that artists brought to California Impressionism. While Impressionism that originally sprang from Paris focused on modern, urban life, the impressionism that took root in California revolved around its tremendous landscape. Although Giverny in France would give rise to a style fascinated by nature, only in California could it take root in such spectacular fashion to form a style filled with light and nature. With its dramatic coastline, its majestic mountains, dense forests, deep canyons, and everything in between, California could provide artists an endless source of inspiration. Not just aesthetic backdrop, California also provided opportunities for artists to form important relationships through clubs. The California Art Club was founded in 1909 and original members include John Hubbard Rich, William Wendt and Edgar Payne. The CAC became closely associated with California Impressionism but not all members painted in that style including Helena Dunlap who became linked with the burgeoning modernist movement. Dunlap would go on to found the Modern Art Society in Los Angeles along with Meta Gehring Cressey, Henrietta Shore and others. In nearby Laguna Beach, an art colony formed which coalesced into the Laguna Beach Art Association and counted among its members Edgar Payne and William Wendt. The purpose was â&#x20AC;&#x153;to advance the knowledge of and interest in Art and to create a spirit of cooperation and fellowship between the painter and the public.â&#x20AC;? Both the LBAA and CAC proved important in guiding artists, building relationships, and promoting their work. These groups proved influential in maintaining representational art even as abstraction began to take hold in other parts of the country. The CAC continues to this day while the LBAA has become the Laguna Art Museum. Other artists in the exhibition include the impressionists Joseph Kleitsch, George Gardner Symons, George Brandriff, and Alson Clark; portraitists Geneve Rixford Sargeant, Matteo Sandona, and Max Wieczorek; avian painter Jessie Arms Botke; and landscape painters Paul Lauritz, Henry Richter, and John Christopher Smith.

Paintings in the Exhibition

Nude with a Japanese Folding Screen

Nude with a Japanese Folding Screen is one of Maurice Askenazyâ&#x20AC;&#x2122;s more modern compositions, calling to mind the work of Bonnard or Vuillard. The intimate scene shows a nude female model, dramatically seen in profile, posing for a painter in a sun-drenched studio. The door to the room is open, giving the impression that the viewer is stealing a glimpse of a private interaction between artist and model. A cleverly placed mirror on the back of the open door reveals the reflection of the painter, who we are meant to take as Askenazy himself, at work. Askenazy takes great care to depict the details of the room, from the patterned ottoman to the framed paintings on the walls, each a mosaic of Impressionistic color. Born Mischa Askenazy, the artist immigrated with his family to the United States from Russia as a young boy. He grew up in New York City and studied at the National Academy of Design before travelling to Europe on a scholarship. Upon his return to America he settled in Los Angeles and gained critical acclaim as a painter of society portraits.

Fishermen on the Dock Loading Supplies is a scene of harbor workers stocking small boats with supplies, perhaps en route to load a larger steamer. In the foreground, a singular female figure stands before the cluster of men with her back to the viewer, while a group of anchored boats float on the motionless water in the background. The brightly painted boats and the fisherman dressed in their blue or orange slickers make for a colorful scene. The simple composition parallels the simplicity of the subject: a glimpse of everyday life and work in a coastal community. Though a painter for most of his life, George Brandriff received no formal training. He relocated from New Jersey to Orange, California, and worked as a piano salesman before studying dentistry at the University of Southern California. Brandriff later gave up his dental practice to dedicate himself to painting full-time. He moved to Laguna Beach, where he became a teacher and active member of the arts community.

Alson Clark painted Toboggan Slide and Dufferin Terrace from atop Montrealâ&#x20AC;&#x2122;s old fort, looking down upon the famous toboggan slide and the snow-capped buildings that line the river below, a perspectival choice perhaps influenced by his service as an aerial photographer in the US army during World War I. Clark masterfully uses the dynamic sweep of the slide from the lower right hand corner to draw the viewer into the center of the composition. In the immediate foreground, a pair of female walkers head towards the viewer on the path adjacent to the slide, the details of their faces and winter coats just barely suggested. A vanguard of California Impressionism, Clark was already a seasoned painter who had lived and painted all over the world by the time he arrived in the Golden State following his service in the war. Having trained at the Art Institute of Chicago, studied with William Merritt Chase at the Art Students League of New York, and briefly under James McNeil Whistler at the Academie Carmen in Paris, Clark eventually settled with his wife in Pasadena, where he taught fine art at Occidental College in Los Angeles and served as the director of the Stickney Memorial School of Art in

In this portrait by Joseph Kleitsch, the sitter is unknown, the painting titled only Woman in Pink. She is wearing a pink dress with white lace sleeves trailing down and into in her lap. She is holding a bit of the lace in her hands, almost absent-mindedly as she tilts her head toward the painter and gives him a small, amused smile. Her hair is swept into a modest updo, and the pink flushing her cheeks echoes the pink of her dress. Kleitschâ&#x20AC;&#x2122;s technique in rendering the lace is fascinating, as he seems to have only fully painted the pattern of the lace and the rest is made up of a few light and minimal strokes of the brush, lending it a sheer quality.

The film industry provided plenty of commissions for Kleitsch, as he was contracted with the prominent LA dealer Earl Stendahl as an in-house portraitist at the time. Hedda Nova was born Hedda Puscewski in Soviet Russia, what is now Ukraine. She became a silent film star, though she never transitioned into talking films due to her thick Russian accent. During the height of her acting career, she was still working hard on learning to speak English. She was married to American actor and director Paul Hurst from 1919 to 1953 when, sadly, he committed suicide after being diagnosed with terminal cancer. This portrait depicts Hedda in a lovely black and gold gown with gossamer sleeves. As a silent film actress, trained to emote without words, it is easy to imagine that her expressive eyes and dramatic hand at her chest are telling the viewer a story.

Peaks of St. Gervais is one of the artist’s classic landscapes, with his distinctive swift brushstroke and charming town and structures — half of which he rendered in the shade — dwarfed by the snow-capped mountain. In most of his paintings, Payne used structures and figures not as subject, but to communicate the dramatic scale of mountain landscape. Drawn to the mountains of Europe, Payne trekked and painted the Swiss Alps, the colorful harbors of Brittany and France, and the sailing vessels in Italy.

White River Bank positions the viewer directly on an icy river, the placid water filling the foreground of the composition and receding behind a gentle bend at the painting’s center. Thick strokes of blues, whites, and grays are suggestive of the snow blanketing the river banks, while the glassy surface of the river is impressionistically painted with layered tones and pops of reds and yellows that capture the rippling reflections of nearby trees. Thin sheets of floating ice appear almost diaphanous by Symons’ hand, further illustrating the artist’s unique talent for rendering the nuanced textures of the winter landscape. After studying at the Art Institute of Chicago and throughout Europe, George Gardner Symons first visited California in 1894 with his friend and fellow artist William Wendt. Symons eventually settled in Southern California and split his time between Laguna Beach and New York City, where he also had a studio. A preeminent American Impressionist known for his landscapes and seascapes, Symons was awarded the Carnegie Prize at the National Academy of Design in 1909.

Spring, an unusually large-scale oil painting by William Wendt, depicts a huge expanse of blue, almost cloudless California sky over a wide, flat plain of verdant grass. The only other adornments to this landscape are stands of tall, thin trees that, in the forefront, seem to tower over the far distant snow-capped mountaintop. Wendtâ&#x20AC;&#x2122;s Impressionist style is evident in the detailed brushwork that makes up the sky. Using short dashes of blue upon blue, Wendt builds the varying color from dark at the top to lighter blue as it nears the mountain on the horizon. Looking closely, the sky almost appears to be a mosaic, but from further back, the colors and strokes blend seamlessly to create its soft, pastel look.

Frank Gavencky Winter in Chicago oil on board 38 x 46 in.