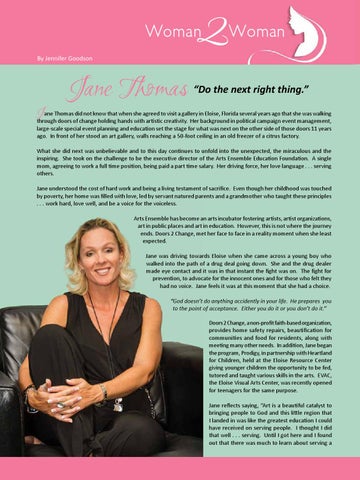 “Do the next right thing.”

ane Thomas did not know that when she agreed to visit a gallery in Eloise, Florida several years ago that she was walking through doors of change holding hands with artistic creativity. Her background in political campaign event management, large-scale special event planning and education set the stage for what was next on the other side of those doors 11 years ago. In front of her stood an art gallery, walls reaching a 50-foot ceiling in an old freezer of a citrus factory. What she did next was unbelievable and to this day continues to unfold into the unexpected, the miraculous and the inspiring. She took on the challenge to be the executive director of the Arts Ensemble Education Foundation. A single mom, agreeing to work a full time position, being paid a part time salary. Her driving force, her love language . . . serving others. Jane understood the cost of hard work and being a living testament of sacrifice. Even though her childhood was touched by poverty, her home was filled with love, led by servant natured parents and a grandmother who taught these principles . . . work hard, love well, and be a voice for the voiceless. Arts Ensemble has become an arts incubator fostering artists, artist organizations, art in public places and art in education. However, this is not where the journey ends. Doors 2 Change, met her face to face in a reality moment when she least expected. Jane was driving towards Eloise when she came across a young boy who walked into the path of a drug deal going down. She and the drug dealer made eye contact and it was in that instant the fight was on. The fight for prevention, to advocate for the innocent ones and for those who felt they had no voice. Jane feels it was at this moment that she had a choice. “God doesn’t do anything accidently in your life. He prepares you to the point of acceptance. Either you do it or you don’t do it.” Doors 2 Change, a non-profit faith-based organization, provides home safety repairs, beautification for communities and food for residents, along with meeting many other needs. In addition, Jane began the program, Prodigy, in partnership with Heartland for Children, held at the Eloise Resource Center giving younger children the opportunity to be fed, tutored and taught various skills in the arts. EVAC, the Eloise Visual Arts Center, was recently opened for teenagers for the same purpose.

Jane reflects saying, “Art is a beautiful catalyst to bringing people to God and this little region that I landed in was like the greatest education I could have received on serving people. I thought I did that well . . . serving. Until I got here and I found out that there was much to learn about serving a