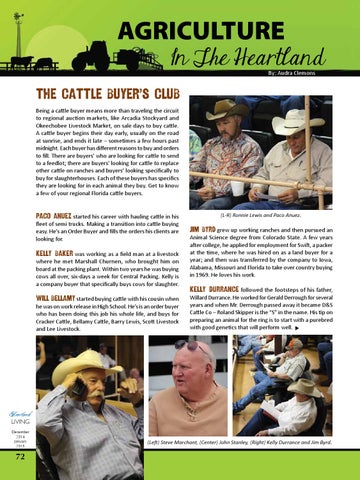 The Cattle Buyer’s Club Being a cattle buyer means more than traveling the circuit to regional auction markets, like Arcadia Stockyard and Okeechobee Livestock Market, on sale days to buy cattle. A cattle buyer begins their day early, usually on the road at sunrise, and ends it late – sometimes a few hours past midnight. Each buyer has different reasons to buy and orders to fill. There are buyers’ who are looking for cattle to send to a feedlot; there are buyers’ looking for cattle to replace other cattle on ranches and buyers’ looking specifically to buy for slaughterhouses. Each of these buyers has specifics they are looking for in each animal they buy. Get to know a few of your regional Florida cattle buyers.

Paco Anuez started his career with hauling cattle in his

fleet of semi trucks. Making a transition into cattle buying easy. He’s an Order Buyer and fills the orders his clients are looking for.

Kelly Baker was working as a field man at a livestock

where he met Marshall Churnen, who brought him on board at the packing plant. Within two years he was buying cows all over, six-days a week for Central Packing. Kelly is a company buyer that specifically buys cows for slaughter.

Will Bellamy started buying cattle with his cousin when

he was on work release in High School. He’s is an order buyer who has been doing this job his whole life, and buys for Cracker Cattle, Bellamy Cattle, Barry Lewis, Scott Livestock and Lee Livestock.

Jim Byrd grew up working ranches and then pursued an

Animal Science degree from Colorado State. A few years after college, he applied for employment for Swift, a packer at the time, where he was hired on as a land buyer for a year; and then was transferred by the company to Iowa, Alabama, Missouri and Florida to take over country buying in 1969. He loves his work.

Kelly Durrance followed the footsteps of his father,

Willard Durrance. He worked for Gerald Derrough for several years and when Mr. Derrough passed away it became D&S Cattle Co – Roland Skipper is the “S” in the name. His tip on preparing an animal for the ring is to start with a purebred with good genetics that will perform well.