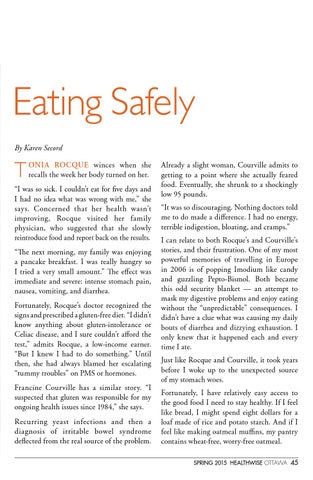 onia Rocque winces when she recalls the week her body turned on her.

“I was so sick. I couldn’t eat for five days and I had no idea what was wrong with me,” she says. Concerned that her health wasn’t improving, Rocque visited her family physician, who suggested that she slowly reintroduce food and report back on the results. “The next morning, my family was enjoying a pancake breakfast. I was really hungry so I tried a very small amount.” The effect was immediate and severe: intense stomach pain, nausea, vomiting, and diarrhea. Fortunately, Rocque’s doctor recognized the signs and prescribed a gluten-free diet. “I didn’t know anything about gluten-intolerance or Celiac disease, and I sure couldn’t afford the test,” admits Rocque, a low-income earner. “But I knew I had to do something.” Until then, she had always blamed her escalating “tummy troubles” on PMS or hormones. Francine Courville has a similar story. “I suspected that gluten was responsible for my ongoing health issues since 1984,” she says. Recurring yeast infections and then a diagnosis of irritable bowel syndrome deflected from the real source of the problem.

Already a slight woman, Courville admits to getting to a point where she actually feared food. Eventually, she shrunk to a shockingly low 95 pounds. “It was so discouraging. Nothing doctors told me to do made a difference. I had no energy, terrible indigestion, bloating, and cramps.” I can relate to both Rocque’s and Courville’s stories, and their frustration. One of my most powerful memories of travelling in Europe in 2006 is of popping Imodium like candy and guzzling Pepto-Bismol. Both became this odd security blanket — an attempt to mask my digestive problems and enjoy eating without the “unpredictable” consequences. I didn’t have a clue what was causing my daily bouts of diarrhea and dizzying exhaustion. I only knew that it happened each and every time I ate. Just like Rocque and Courville, it took years before I woke up to the unexpected source of my stomach woes. Fortunately, I have relatively easy access to the good food I need to stay healthy. If I feel like bread, I might spend eight dollars for a loaf made of rice and potato starch. And if I feel like making oatmeal muffins, my pantry contains wheat-free, worry-free oatmeal. SPRING 2015 HEALTHWISE OTTAWA 45