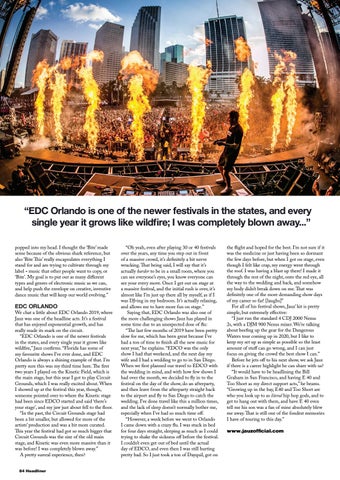 “EDC Orlando is one of the newer festivals in the states, and every single year it grows like wildfire; I was completely blown away...” popped into my head. I thought the ‘Bite’ made sense because of the obvious shark reference, but also ‘Bite This’ really encapsulates everything I stand for and am trying to cultivate through my label - music that other people want to copy, or ‘Bite’. My goal is to put out as many different types and genres of electronic music as we can, and help push the envelope on creative, inventive dance music that will keep our world evolving.”

We chat a little about EDC Orlando 2019, where Jauz was one of the headline acts. It’s a festival that has enjoyed exponential growth, and has really made its mark on the circuit. “EDC Orlando is one of the newer festivals in the states, and every single year it grows like wildfire,” Jauz confirms. “Florida has some of my favourite shows I’ve ever done, and EDC Orlando is always a shining example of that. I’m pretty sure this was my third time here. The first two years I played on the Kinetic Field, which is the main stage, but this year I got to play Circuit Grounds, which I was really excited about. When I showed up at the festival this year, though, someone pointed over to where the Kinetic stage had been since EDCO started and said ‘there’s your stage’, and my jaw just about fell to the floor. “In the past, the Circuit Grounds stage had been a bit smaller, but allowed for more of the artists’ production and was a bit more curated. This year the festival had got so much bigger that Circuit Grounds was the size of the old main stage, and Kinetic was even more massive than it was before! I was completely blown away.” A pretty surreal experience, then? 84 Headliner

“Oh yeah, even after playing 30 or 40 festivals over the years, any time you step out in front of a massive crowd, it’s definitely a bit nerve wracking. That being said, I will say that it’s actually harder to be in a small room, where you can see everyone’s eyes, you know everyone can see your every move. Once I get out on stage at a massive festival, and the initial rush is over, it’s almost like I’m just up there all by myself, as if I was DJ-ing in my bedroom. It’s actually relaxing, and allows me to have more fun on stage.” Saying that, EDC Orlando was also one of the more challenging shows Jauz has played in some time due to an unexpected dose of flu: “The last few months of 2019 have been pretty slow for me, which has been great because I’ve had a ton of time to finish all the new music for next year,” he explains. “EDCO was the only show I had that weekend, and the next day my wife and I had a wedding to go to in San Diego. When we first planned our travel to EDCO with the wedding in mind, and with how few shows I had over the month, we decided to fly in to the festival on the day of the show, do an afterparty, and then leave from the afterparty straight back to the airport and fly to San Diego to catch the wedding. I’ve done travel like this a million times, and the lack of sleep doesn’t normally bother me, especially when I’ve had so much time off. “However, a week before we went to Orlando I came down with a crazy flu. I was stuck in bed for four days straight, sleeping as much as I could trying to shake the sickness off before the festival. I couldn’t even get out of bed until the actual day of EDCO, and even then I was still hurting pretty bad. So I just took a ton of Dayquil, got on

the flight and hoped for the best. I’m not sure if it was the medicine or just having been so dormant the few days before, but when I got on stage, even though I felt like crap, my energy went through the roof. I was having a blast up there! I made it through the rest of the night, onto the red eye, all the way to the wedding and back, and somehow my body didn’t break down on me. That was definitely one of the more demanding show days of my career so far! [laughs]” For all of his festival shows, Jauz’ kit is pretty simple, but extremely effective: “I just run the standard 4 CDJ 2000 Nexus 2s, with a DJM 900 Nexus mixer. We’re talking about beefing up the gear for the Dangerous Waters tour coming up in 2020, but I like to keep my set up as simple as possible so the least amount of stuff can go wrong, and I can just focus on giving the crowd the best show I can.” Before he jets off to his next show, we ask Jauz if there is a career highlight he can share with us? “It would have to be headlining the Bill Graham in San Francisco, and having E 40 and Too Short as my direct support acts,” he beams. “Growing up in the bay, E40 and Too Short are who you look up to as literal hip hop gods, and to get to hang out with them, and have E 40 even tell me his son was a fan of mine absolutely blew me away. That is still one of the fondest memories I have of touring to this day.” www.jauzofficial.com