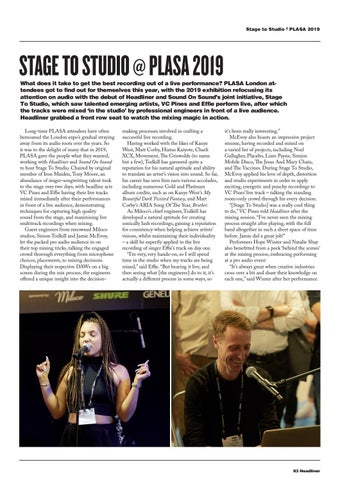 What does it take to get the best recording out of a live performance? PLASA London attendees got to find out for themselves this year, with the 2019 exhibition refocusing its attention on audio with the debut of Headliner and Sound On Sound’s joint initiative, Stage To Studio, which saw talented emerging artists, VC Pines and Effie perform live, after which the tracks were mixed ‘in the studio’ by professional engineers in front of a live audience. Headliner grabbed a front row seat to watch the mixing magic in action.

Long-time PLASA attendees have often bemoaned the London expo’s gradual straying away from its audio roots over the years. So it was to the delight of many that in 2019, PLASA gave the people what they wanted, working with Headliner and Sound On Sound to host Stage To Studio. Chaired by original member of Iron Maiden, Tony Moore, an abundance of singer-songwriting talent took to the stage over two days, with headline acts VC Pines and Effie having their live tracks mixed immediately after their performances in front of a live audience, demonstrating techniques for capturing high quality sound from the stage, and maximising live multitrack recordings when mixing. Guest engineers from renowned Miloco studios, Simon Todkill and Jamie McEvoy, let the packed pro audio audience in on their top mixing tricks, talking the engaged crowd thorough everything from microphone choices, placements, to mixing decisions. Displaying their respective DAWs on a big screen during the mix process, the engineers offered a unique insight into the decision-

making processes involved in crafting a successful live recording. Having worked with the likes of Kanye West, Matt Corby, Hiatus Kaiyote, Charli XCX, Movement, The Griswolds (to name but a few), Todkill has garnered quite a reputation for his natural aptitude and ability to translate an artist’s vision into sound. So far, his career has seen him earn various accolades, including numerous Gold and Platinum album credits, such as on Kanye West’s My Beautiful Dark Twisted Fantasy, and Matt Corby’s ARIA Song Of The Year, Brother. As Miloco’s chief engineer, Todkill has developed a natural aptitude for creating sonically lush recordings, gaining a reputation for consistency when helping achieve artists’ visions, whilst maintaining their individuality – a skill he expertly applied to the live recording of singer Effie’s track on day one. “I’m very, very hands-on, so I will spend time in the studio when my tracks are being mixed,” said Effie. “But hearing it live, and then seeing what [the engineers] do to it, it’s actually a different process in some ways, so

it’s been really interesting.” McEvoy also boasts an impressive project resume, having recorded and mixed on a varied list of projects, including Noel Gallagher, Placebo, Liam Payne, Simion Mobile Disco, The Jesus And Mary Chain, and The Vaccines. During Stage To Studio, McEvoy applied his love of depth, distortion and studio experiments in order to apply exciting, energetic and punchy recordings to VC Pines’ live track – talking the standing room-only crowd through his every decision. “[Stage To Studio] was a really cool thing to do,” VC Pines told Headliner after the mixing session. “I’ve never seen the mixing process straight after playing, with the full band altogether in such a short space of time before. Jamie did a great job!” Performers Hope Winter and Natalie Shay also benefitted from a peek ‘behind the scenes’ at the mixing process, embracing performing at a pro audio event: “It’s always great when creative industries cross over a bit and share their knowledge on each one,” said Winter after her performance.