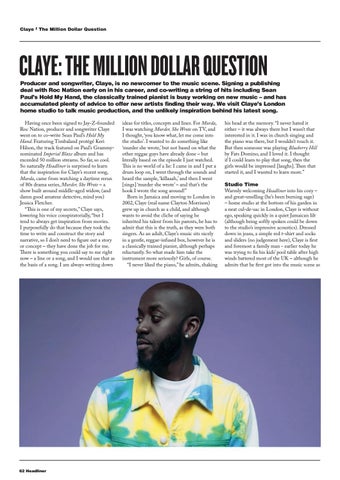 Producer and songwriter, Claye, is no newcomer to the music scene. Signing a publishing deal with Roc Nation early on in his career, and co-writing a string of hits including Sean Paul’s Hold My Hand, the classically trained pianist is busy working on new music – and has accumulated plenty of advice to offer new artists finding their way. We visit Claye’s London home studio to talk music production, and the unlikely inspiration behind his latest song.

Having once been signed to Jay-Z-founded Roc Nation, producer and songwriter Claye went on to co-write Sean Paul’s Hold My Hand. Featuring Timbaland protégé Keri Hilson, the track featured on Paul’s Grammynominated Imperial Blaze album and has exceeded 50 million streams. So far, so cool. So naturally Headliner is surprised to learn that the inspiration for Claye’s recent song, Murda, came from watching a daytime rerun of 80s drama series, Murder, She Wrote – a show built around middle-aged widow, (and damn good amateur detective, mind you) Jessica Fletcher. “This is one of my secrets,” Claye says, lowering his voice conspiratorially, “but I tend to always get inspiration from movies. I purposefully do that because they took the time to write and construct the story and narrative, so I don’t need to figure out a story or concept – they have done the job for me. There is something you could say to me right now – a line or a song, and I would use that as the basis of a song. I am always writing down

ideas for titles, concepts and lines. For Murda, I was watching Murder, She Wrote on TV, and I thought, ‘you know what, let me come into the studio’. I wanted to do something like ‘murder she wrote,’ but not based on what the other reggae guys have already done – but literally based on the episode I just watched. This is no world of a lie: I came in and I put a drum loop on, I went through the sounds and heard the sample, ‘killaaah,’ and then I went [sings] ‘murder she wrote’ – and that’s the hook I wrote the song around!” Born in Jamaica and moving to London in 2002, Claye (real name Clayton Morrison) grew up in church as a child, and although wants to avoid the cliche of saying he inherited his talent from his parents, he has to admit that this is the truth, as they were both singers. As an adult, Claye’s music sits nicely in a gentle, reggae-infused box, however he is a classically trained pianist, although perhaps reluctantly. So what made him take the instrument more seriously? Girls, of course. “I never liked the piano,” he admits, shaking

his head at the memory. “I never hated it either – it was always there but I wasn’t that interested in it. I was in church singing and the piano was there, but I wouldn’t touch it. But then someone was playing Blueberry Hill by Fats Domino, and I loved it. I thought if I could learn to play that song, then the girls would be impressed [laughs]. Then that started it, and I wanted to learn more.” Studio Time Warmly welcoming Headliner into his cozy – and great-smelling (he’s been burning sage) – home studio at the bottom of his garden in a neat cul-de-sac in London, Claye is without ego, speaking quickly in a quiet Jamaican lilt (although being softly spoken could be down to the studio’s impressive acoustics). Dressed down in jeans, a simple red t-shirt and socks and sliders (no judgement here), Claye is first and foremost a family man - earlier today he was trying to fix his kids’ pool table after high winds battered most of the UK – although he admits that he first got into the music scene as