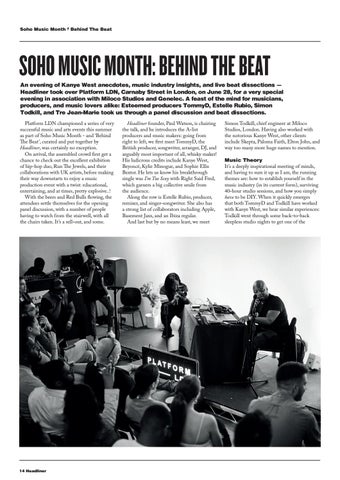 SOHO MUSIC MONTH: BEHIND THE BEAT An evening of Kanye West anecdotes, music industry insights, and live beat dissections — Headliner took over Platform LDN, Carnaby Street in London, on June 28, for a very special evening in association with Miloco Studios and Genelec. A feast of the mind for musicians, producers, and music lovers alike: Esteemed producers TommyD, Estelle Rubio, Simon Todkill, and Tre Jean-Marie took us through a panel discussion and beat dissections. Platform LDN championed a series of very successful music and arts events this summer as part of Soho Music Month - and ‘Behind The Beat’, curated and put together by Headliner, was certainly no exception. On arrival, the assembled crowd first get a chance to check out the excellent exhibition of hip-hop duo, Run The Jewels, and their collaborations with UK artists, before making their way downstarts to enjoy a music production event with a twist: educational, entertaining, and at times, pretty explosive..! With the beers and Red Bulls flowing, the attendees settle themselves for the opening panel discussion, with a number of people having to watch from the stairwell, with all the chairs taken. It’s a sell-out, and some.

Headliner founder, Paul Watson, is chairing the talk, and he introduces the A-list producers and music makers: going from right to left, we first meet TommyD, the British producer, songwriter, arranger, DJ, and arguably most important of all, whisky maker! His ludicrous credits include Kanye West, Beyoncé, Kylie Minogue, and Sophie Ellis Bextor. He lets us know his breakthrough single was I’m Too Sexy with Right Said Fred, which garners a big collective smile from the audience. Along the row is Estelle Rubio, producer, remixer, and singer-songwriter. She also has a strong list of collaborators including Apple, Basement Jaxx, and an Ibiza regular. And last but by no means least, we meet

Simon Todkill, chief engineer at Miloco Studios, London. Having also worked with the notorious Kanye West, other clients include Skepta, Paloma Faith, Elton John, and way too many more huge names to mention. Music Theory It’s a deeply inspirational meeting of minds, and having to sum it up as I am, the running themes are: how to establish yourself in the music industry (in its current form), surviving 40-hour studio sessions, and how you simply have to be DIY. When it quickly emerges that both TommyD and Todkill have worked with Kanye West, we hear similar experiences: Todkill went through some back-to-back sleepless studio nights to get one of the