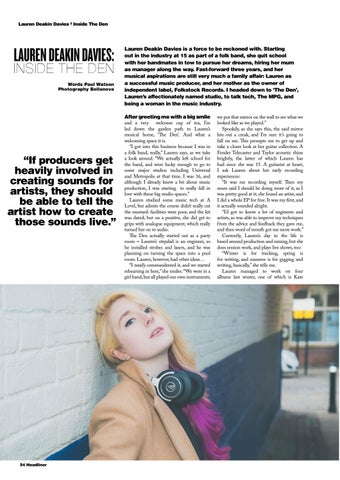 Lauren Deakin Davies Inside The Den

“If producers get heavily involved in creating sounds for artists, they should be able to tell the artist how to create those sounds live.”

Lauren Deakin Davies is a force to be reckoned with. Starting out in the industry at 15 as part of a folk band, she quit school with her bandmates in tow to pursue her dreams, hiring her mum as manager along the way. Fast-forward three years, and her musical aspirations are still very much a family affair: Lauren as a successful music producer, and her mother as the owner of independent label, Folkstock Records. I headed down to ‘The Den’, Lauren’s affectionately named studio, to talk tech, The MPG, and being a woman in the music industry. After greeting me with a big smile and a very welcome cup of tea, I’m led down the garden path to Lauren’s musical home, ‘The Den’. And what a welcoming space it is. “I got into this business because I was in a folk band, really,” Lauren says, as we take a look around. “We actually left school for the band, and were lucky enough to go to some major studios including Universal and Metropolis at that time. I was 16, and although I already knew a bit about music production, I was starting to really fall in love with these big studio spaces.” Lauren studied some music tech at A Level, but admits the course didn’t really cut the mustard: facilities were poor, and the kit was dated; but on a positive, she did get to grips with analogue equipment, which really turned her on to audio. The Den actually started out as a party room – Lauren’s stepdad is an engineer, so he installed strobes and lasers, and he was planning on turning the space into a pool room. Lauren, however, had other ideas… “I totally commandeered it, and we started rehearsing in here,” she smiles. “We were in a girl band, but all played our own instruments;

we put that mirror on the wall to see what we looked like as we played.” Spookily, as she says this, the said mirror lets out a creak, and I’m sure it’s going to fall on me. This prompts me to get up and take a closer look at her guitar collection. A Fender Telecaster and Taylor acoustic shine brightly, the latter of which Lauren has had since she was 15. A guitarist at heart, I ask Lauren about her early recording experiences: “It was me recording myself. Then my mum said I should be doing more of it, as I was pretty good at it; she found an artist, and I did a whole EP for free. It was my first, and it actually sounded alright. “I’d got to know a lot of engineers and artists, so was able to improve my techniques from the advice and feedback they gave me, and then word of mouth got me more work.” Currently, Lauren’s day in the life is based around production and mixing, but she does session work, and plays live shows, too: “Winter is for tracking, spring is for writing, and summer is for gigging and writing, basically,” she tells me. Lauren managed to work on four albums last winter, one of which is Kate