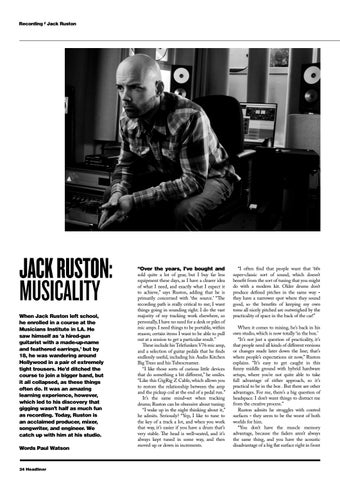 JACK RUSTON: MUSICALITY When Jack Ruston left school, he enrolled in a course at the Musicians Institute in LA. He saw himself as ‘a hired-gun guitarist with a made-up-name and feathered earrings,’ but by 18, he was wandering around Hollywood in a pair of extremely tight trousers. He’d ditched the course to join a bigger band, but it all collapsed, as these things often do. It was an amazing learning experience, however, which led to his discovery that gigging wasn’t half as much fun as recording. Today, Ruston is an acclaimed producer, mixer, songwriter, and engineer. We catch up with him at his studio. Words Paul Watson

“Over the years, I’ve bought and sold quite a lot of gear, but I buy far less equipment these days, as I have a clearer idea of what I need, and exactly what I expect it to achieve,” says Ruston, adding that he is primarily concerned with ‘the source.’ “The recording path is really critical to me; I want things going in sounding right. I do the vast majority of my tracking work elsewhere, so personally, I have no need for a desk or piles of mic amps. I need things to be portable, within reason; certain items I want to be able to pull out at a session to get a particular result.” These include his Telefunken V76 mic amp, and a selection of guitar pedals that he finds endlessly useful, including his Audio Kitchen Big Trees and his Tubescreamer. “I like those sorts of curious little devices that do something a bit different,” he smiles. “Like this GigRig Z Cable, which allows you to restore the relationship between the amp and the pickup coil at the end of a pedal run.” It’s the same mind-set when tracking drums; Ruston can be obsessive about tuning: “I wake up in the night thinking about it,” he admits. Seriously? “Yep, I like to tune to the key of a track a lot, and when you work that way, it’s easier if you have a drum that’s very stable. The head is well-seated, and it’s always kept tuned in some way, and then moved up or down in increments.

“I often find that people want that ‘60s super-classic sort of sound, which doesn’t benefit from the sort of tuning that you might do with a modern kit. Older drums don’t produce defined pitches in the same way they have a narrower spot where they sound good, so the benefits of keeping my own toms all nicely pitched are outweighed by the practicality of space in the back of the car!” When it comes to mixing, he’s back in his own studio, which is now totally ‘in the box.’ “It’s not just a question of practicality, it’s that people need all kinds of different versions or changes made later down the line; that’s where people’s expectations sit now,” Ruston explains. “It’s easy to get caught in this funny middle ground with hybrid hardware setups, where you’re not quite able to take full advantage of either approach, so it’s practical to be in the box . But there are other advantages. For me, there’s a big question of headspace. I don’t want things to distract me from the creative process.” Ruston admits he struggles with control surfaces - they seem to be the worst of both worlds for him. “You don’t have the muscle memory advantage, because the faders aren’t always the same thing, and you have the acoustic disadvantage of a big flat surface right in front 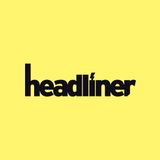