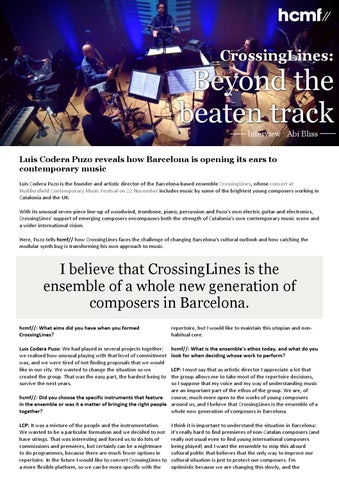 Luis Codera Puzo reveals how Barcelona is opening its ears to contemporary music Luis Codera Puzo is the founder and artistic director of the Barcelona-based ensemble CrossingLines, whose concert at Huddersfield Contemporary Music Festival on 22 November includes music by some of the brightest young composers working in Catalonia and the UK. With its unusual seven-piece line-up of woodwind, trombone, piano, percussion and Puzo&#39;s own electric guitar and electronics, CrossingLines&#39; support of emerging composers encompasses both the strength of Catalonia&#39;s own contemporary music scene and a wider international vision. Here, Puzo tells hcmf// how CrossingLines faces the challenge of changing Barcelona&#39;s cultural outlook and how catching the modular synth bug is transforming his own approach to music.

I believe that CrossingLines is the ensemble of a whole new generation of composers in Barcelona. hcmf//: What aims did you have when you formed CrossingLines?

repertoire, but I would like to maintain this utopian and nonhabitual core.

Luis Codera Puzo: We had played in several projects together; we realised how unusual playing with that level of commitment was, and we were tired of not finding proposals that we would like in our city. We wanted to change the situation so we created the group. That was the easy part, the hardest being to survive the next years.

hcmf//: What is the ensembleâ&amp;#x20AC;&amp;#x2122;s ethos today, and what do you look for when deciding whose work to perform?

LCP: It was a mixture of the people and the instrumentation. We wanted to be a particular formation and we decided to not have strings. That was interesting and forced us to do lots of commissions and premieres, but certainly can be a nightmare to do programmes, because there are much fewer options in repertoire. In the future I would like to convert CrossingLines to a more flexible platform, so we can be more specific with the

I think it is important to understand the situation in Barcelona: itâ&amp;#x20AC;&amp;#x2122;s really hard to find premieres of non-Catalan composers (and really not usual even to find young international composers being played) and I want the ensemble to stop this absurd cultural politic that believes that the only way to improve our cultural situation is just to protect our composers. Iâ&amp;#x20AC;&amp;#x2122;m optimistic because we are changing this slowly, and the

LCP: I must say that as artistic director I appreciate a lot that the group allows me to take most of the repertoire decisions, so I suppose that my voice and my way of understanding music are an important part of the ethos of the group. We are, of hcmf//: Did you choose the specific instruments that feature course, much more open to the works of young composers in the ensemble or was it a matter of bringing the right people around us, and I believe that CrossingLines is the ensemble of a together? whole new generation of composers in Barcelona.

CrossingLines: Beyond the beaten track institutions are starting to understand how important it is to have a broad vision of what is happening. hcmf//: How is new music received by audiences in Barcelona, and what does the city offer to musicians? LCP: Barcelona is changing. There is less money than ever, but a generational change is taking place. The young musicians and composers are much better educated than in the past, a big part of it due to the creation of the new school for music some years ago. And besides some personal, underground projects, or initiatives by collectives, there is also starting to be an institutional change which is fundamental for a real and definitive change of paradigm. For example, the main institution for classical music in Barcelona, L’Auditori, now has an exceptional group of people who have made a really brave and unexpected contemporary music season for the next year, including concerts of drone the last years. It has been a total change of perspective in my music, modular synthesisers, premieres especially of young music, and I’m honestly not sure what I will do in the future. composers and inviting young ensembles such as Nadar to the city. That was very difficult to imagine some years ago. hcmf//: What about the other pieces that CrossingLines will be performing both here and at hcmf// a Barcelona on 26 October? hcmf//: What questions do you try to answer in your own music? LCP: One of the other premieres is from Manuel Rodríguez Valenzuela, an extremely creative composer, who has made a LCP: I could say that the idea of multiplicity has been an piece with prepared instruments, electric typewriting machines, important idea during the last years, but this interest is slowly fading or transforming. Another important aspect is the concept amplification and some modifications. of changing. I don’t think about it, but I used to feel the necessity to change, to keep searching and do different things. It is more a Pedro Álvarez is a composer who I have been trying to commission for a long time. I believe he is one of the most personality trait than an aesthetic goal. interesting voices of our generation, so you can imagine how happy I am to finally have achieved this. Like most of Pedro’s hcmf//: Tell us about your piece π, which features at your music, the concept of temporality is not a directional one, and in concert at hcmf// 2014... his piece he exposes a series of static textures that are superimposed upon an improvised electric guitar part, that he LCP: In 2013, I came into contact with the free improvisation will play himself. scene in Barcelona, which produced a powerful change in my tastes and a considerable broadening of my musical interests. I had also started to work with synthesisers, especially modular hcmf//: What does 2015 hold for you and for CrossingLines? synthesisers, which have a tendency to produce ‘not fixed’ creations. These new influences stand, paradoxically, at the LCP: I want to increase my activity as a performer with electric opposite extreme to what defined me as a composer, which can guitar and synths, so I have tried to invest time in creation with probably be characterised as the desire to control all the them. I will premiere φ (phi) in Paris in March, a piece for electric parameters of a piece. I believe there really exists a pleasure guitar that will be part of the same series as π, and other pieces when we get close to that which we have not yet become. π with synths during the year, principally in Barcelona. Also my reflects these two sides which had begun to clash, along with piece Albedo for piano and electronics, that I have been writing many other indiscriminate influences, such as the music of for two years, will be premiered in May by the pianist Lluisa Feldman, Webern, Pedro Álvarez and Otomo Yoshihide, and Espigolé. noise and drone music. With CrossingLines we have at the moment nine concerts hcmf//: Has your growing interest in modular synthesis led you planned for this season in Barcelona, Mallorca, Vilafranca del to re-evaluate anything about your work as a composer? Penedés, Huddersfield and Paris, with very different situations and programmes. Some of them will be really very difficult to LCP: Absolutely. What I like most from modular synthesis is that realise, and quite challenging for us. This concert in Huddersfield it offers a totally different paradigm of creating music. I was used is probably our most difficult programme yet! to trying to imagine, describe and write every parameter of a piece, and with modular synthesis I found myself constantly improvising, just enjoying sounds, or searching without a goal for CrossingLines @ 2014 hours. It has been also a very good answer to the necessity to Sunday 22 November | Book Now play, to perform music, activity that I had been forgetting during

CrossingLines' Artistic Director reveals how Barcelona is opening its ears to contemporary music. 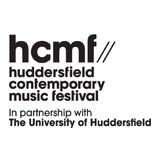