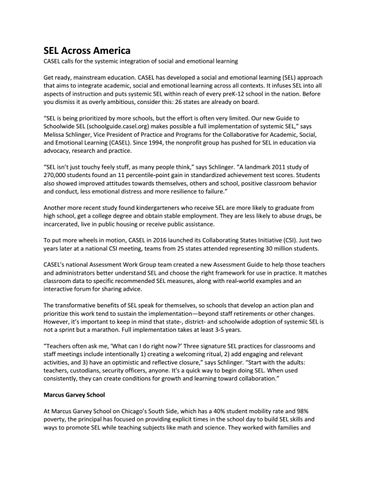 SEL Across America  CASEL calls for the systemic integration of social and emotional learning    Get ready, mainstream education. CASEL has developed a social and emotional learning (SEL) approach  that aims to integrate academic, social and emotional learning across all contexts. It infuses SEL into all  aspects of instruction and puts systemic SEL within reach of every preK‐12 school in the nation. Before  you dismiss it as overly ambitious, consider this: 26 states are already on board.    “SEL is being prioritized by more schools, but the effort is often very limited. Our new Guide to  Schoolwide SEL (schoolguide.casel.org) makes possible a full implementation of systemic SEL,” says  Melissa Schlinger, Vice President of Practice and Programs for the Collaborative for Academic, Social,  and Emotional Learning (CASEL). Since 1994, the nonprofit group has pushed for SEL in education via  advocacy, research and practice.    “SEL isn’t just touchy feely stuff, as many people think,” says Schlinger. “A landmark 2011 study of  270,000 students found an 11 percentile‐point gain in standardized achievement test scores. Students  also showed improved attitudes towards themselves, others and school, positive classroom behavior  and conduct, less emotional distress and more resilience to failure.”    Another more recent study found kindergarteners who receive SEL are more likely to graduate from  high school, get a college degree and obtain stable employment. They are less likely to abuse drugs, be  incarcerated, live in public housing or receive public assistance.    To put more wheels in motion, CASEL in 2016 launched its Collaborating States Initiative (CSI). Just two  years later at a national CSI meeting, teams from 25 states attended representing 30 million students.    CASEL's national Assessment Work Group team created a new Assessment Guide to help those teachers  and administrators better understand SEL and choose the right framework for use in practice. It matches  classroom data to specific recommended SEL measures, along with real‐world examples and an  interactive forum for sharing advice.    The transformative benefits of SEL speak for themselves, so schools that develop an action plan and  prioritize this work tend to sustain the implementation—beyond staff retirements or other changes.  However, it’s important to keep in mind that state‐, district‐ and schoolwide adoption of systemic SEL is  not a sprint but a marathon. Full implementation takes at least 3‐5 years.    “Teachers often ask me, ‘What can I do right now?’ Three signature SEL practices for classrooms and  staff meetings include intentionally 1) creating a welcoming ritual, 2) add engaging and relevant  activities, and 3) have an optimistic and reflective closure,” says Schlinger. “Start with the adults:  teachers, custodians, security officers, anyone. It's a quick way to begin doing SEL. When used  consistently, they can create conditions for growth and learning toward collaboration.”    Marcus Garvey School    At Marcus Garvey School on Chicago’s South Side, which has a 40% student mobility rate and 98%  poverty, the principal has focused on providing explicit times in the school day to build SEL skills and  ways to promote SEL while teaching subjects like math and science. They worked with families and

community to build awareness and commitment. They cultivated adult SEL in order to better promote it  for students.    The experience illustrates the power of systemic SEL in building up a child’s self‐management, social  awareness, relationship and responsible decision‐making skills, regardless of environmental or resource  constraints. Watch the video to learn more.    “SEL is the link between behavior and academics. It plays a big role in achieving equity outcomes in  schools. It engages students as meaningful actors in solving problems and making decisions. It creates a  space of relationships and trust where kids feel valued and respected—and this might be our best hope  for ending violence in schools,” says Schlinger. “I’m excited to make SEL part of American education.”

CASEL calls for the systemic integration of social and emotional learning

CASEL calls for the systemic integration of social and emotional learning