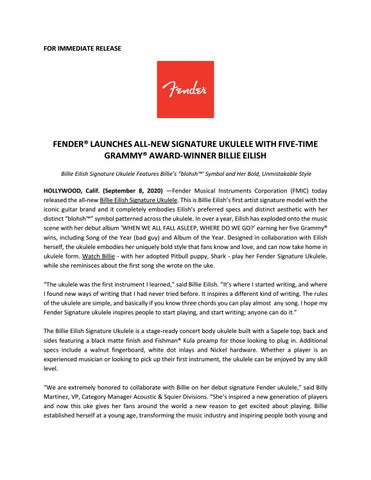 HOLLYWOOD, Calif. (September 8, 2020) —Fender Musical Instruments Corporation (FMIC) today released the all-new Billie Eilish Signature Ukulele. This is Billie Eilish’s first artist signature model with the iconic guitar brand and it completely embodies Eilish’s preferred specs and distinct aesthetic with her distinct “blohsh™” symbol patterned across the ukulele. In over a year, Eilish has exploded onto the music scene with her debut album ‘WHEN WE ALL FALL ASLEEP, WHERE DO WE GO?’ earning her five Grammy® wins, including Song of the Year (bad guy) and Album of the Year. Designed in collaboration with Eilish herself, the ukulele embodies her uniquely bold style that fans know and love, and can now take home in ukulele form. Watch Billie - with her adopted Pitbull puppy, Shark - play her Fender Signature Ukulele, while she reminisces about the first song she wrote on the uke. “The ukulele was the first instrument I learned,” said Billie Eilish. “It’s where I started writing, and where I found new ways of writing that I had never tried before. It inspires a different kind of writing. The rules of the ukulele are simple, and basically if you know three chords you can play almost any song. I hope my Fender Signature ukulele inspires people to start playing, and start writing; anyone can do it.” The Billie Eilish Signature Ukulele is a stage-ready concert body ukulele built with a Sapele top, back and sides featuring a black matte finish and Fishman® Kula preamp for those looking to plug in. Additional specs include a walnut fingerboard, white dot inlays and Nickel hardware. Whether a player is an experienced musician or looking to pick up their first instrument, the ukulele can be enjoyed by any skill level. “We are extremely honored to collaborate with Billie on her debut signature Fender ukulele,” said Billy Martinez, VP, Category Manager Acoustic &amp; Squier Divisions. “She’s inspired a new generation of players and now this uke gives her fans around the world a new reason to get excited about playing. Billie established herself at a young age, transforming the music industry and inspiring people both young and

old. She is unconditionally herself and the ukulele she designed is a perfect reflection of her spirit and iconic style.” Inspired by her parents and brother’s love of music, Billie Eilish began her musical journey at a very young age, when other kids her age were just starting kindergarten. The Los Angeles native first gained attention in 2015 at the age of thirteen after uploading the song ocean eyes to Soundcloud, which was written and produced by her brother Finneas. Billie’s debut EP, dont smile at me, released in 2017, was a slow-burning hit and laid the groundwork for her debut full length album, WHEN WE ALL FALL ASLEEP, WHERE DO WE GO?, which debuted atop the Billboard 200 and became the best-performing album of 2019 in the US. Billie is not only the youngest and second person ever to win the four main Grammy® categories – Best New Artist, Record of the Year, Song of the Year and Album of the Year – in the same year but also the first female to do so. Eilish’s ascent to pop stardom started with the ukulele, the first instrument she learned to play and write songs on, making this an ode to her humble beginnings in the music world. The launch of Eilish’s signature ukulele coincides with the recent addition of six of her songs (for guitar and uke only) to Fender Play, the complete online learning app for guitar, bass and ukulele. Fans around the world can start their musical journey and play their very own Billie Eilish ukulele while learning her songs, including &amp;burn, my strange addiction, ocean eyes, Six Feet Under, watch and when the party’s over. Billie has been a big advocate for mental health and awareness and recently Fender Play users have shared they are also utilizing the app as a way to destress, reduce anxiety. “Billie is a once-in-a-generation talent who has been on a meteoric rise since releasing her first song to Soundcloud in 2018,” said Matt Watts, VP Marketing. “It’s no secret that Billie moves millions of people and has a unique approach to creating. The output of this instrument is no different as it celebrates that freedom of self-expression through Billie’s lens. We hope her genre-defying blend and this uke inspires others to start expressing themselves creatively.” In true tradition, the Fender Artist Signature Series honors iconic musicians through product progression and storytelling, creating instruments inspired by the unique specifications of the world’s greatest guitarists and bassists. Fender discusses the all-new Billie Eilish Signature Ukulele specs and all details in an episode of Fender’s serialized social video series, Fender Demos. Fender Demos is an educational video series focused on providing a deep dive into Fender’s newest products. The series focuses on showcasing not only the key features and benefits, but also the sonic quality of Fender’s instruments, amplifiers and pedals. In addition to product demos, the series also provides valuable beginner, intermediate and advanced tone tips, set-up and maintenance guides and insights to getting the most out of your Fender gear. Learn more about the Billie Eilish Signature Ukulele and access product descriptions here; product photos and images of Billie Eilish with her Signature Ukulele can be found here.

For technical specs, additional information on new Fender products and to find a retail partner near you, visit www.fender.com. Join the conversation on social media by following @Fender. ### Billie Eilish Signature Ukulele – $299.99 As soon as she burst onto the scene with her 2015 single “ocean eyes”, it was clear that Billie Eilish is a force to be reckoned with. In the years since, she has established herself as a new kind of pop culture icon, taking the fashion and music industries by storm on her own terms. Billie’s meteoric ascent to pop stardom started with the ukulele, the first instrument she learned to play. Designed in collaboration with Billie Eilish, her Signature Ukulele is a stage-ready instrument that embodies Billie’s bold, unmistakable style. This concert ukulele is built with sapele top, back, and sides, featuring a matte black finish with Billie’s “blohsh™” symbol. It also includes a Fishman® Kula preamp for those looking to plug in. Whether you’re an experienced musician or looking to pick up your first instrument, one thing is true: you can play anything on the ukulele.

ABOUT BILLIE EILISH: 18-year-old global pop-phenom Billie Eilish has fast become one of the biggest stars to emerge since the release of her debut single “ocean eyes,” and continues to shatter the ceiling of music with her genredefying sound. Fast forward from her humble breakout in 2015, Billie’s album WHEN WE ALL FALL ASLEEP, WHERE DO WE GO? debuted at No. 1 on the Billboard 200 in the U.S as well as 17 additional countries around the world upon release. WHEN WE ALL FALL ASLEEP, WHERE DO WE GO? was written, produced and recorded entirely by Billie Eilish and brother FINNEAS in their childhood home of Highland Park, Los Angeles. Earlier this year, Billie Eilish won 5 GRAMMY®’s at the 62nd GRAMMY® Awards for Best New Artist, Album of the Year, Record of the Year, Song of the Year, and Best Pop Vocal Album. February saw Billie take the stage with her brother FINNEAS to deliver a rousing rendition of The Beatles’ ‘Yesterday’ at the 92nd Oscars. Later that month, she released her internationally hailed, official James Bond theme song ‘No Time To Die.’ March came, and the global pop-sensation was ready to embark on her first ever SOLDOUT WHERE DO WE GO? world arena tour, only for it to be postponed just days into the North American leg of the tour, as the country went into lockdown. In July, Billie released her latest single, ‘my future,’ signifying an assured young woman, coming into her own, as she contemplates what’s ahead of her.

ABOUT FENDER MUSICAL INSTRUMENTS CORPORATION: Since 1946, Fender has revolutionized music and culture as one of the world’s leading musical instrument manufacturers, marketers and distributors. Fender Musical Instruments Corporation (FMIC)–whose portfolio of brands includes Fender®, Squier®, Gretsch® guitars, Jackson®, EVH® and Charvel®–follows a player-centric approach to crafting the highest-quality instruments and digital experiences across genres. Since 2015, Fender’s digital arm has introduced a new ecosystem of products and interactive experiences to accompany players at every stage of their musical journey. This includes innovative apps and learning platforms designed to complement Fender guitars, amplifiers, effects pedals, accessories and pro-audio 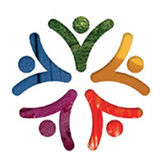