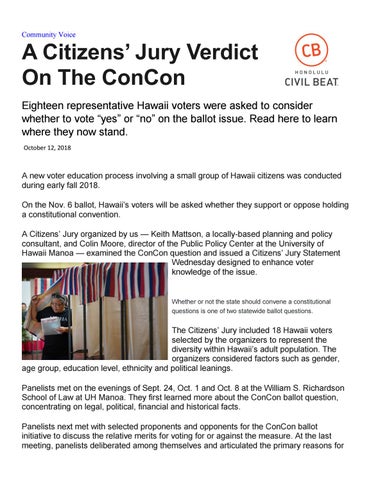 A Citizens’ Jury Verdict On The ConCon Eighteen representative Hawaii voters were asked to consider whether to vote “yes” or “no” on the ballot issue. Read here to learn where they now stand. October 12, 2018

A new voter education process involving a small group of Hawaii citizens was conducted during early fall 2018. On the Nov. 6 ballot, Hawaii’s voters will be asked whether they support or oppose holding a constitutional convention. A Citizens’ Jury organized by us — Keith Mattson, a locally-based planning and policy consultant, and Colin Moore, director of the Public Policy Center at the University of Hawaii Manoa — examined the ConCon question and issued a Citizens’ Jury Statement Wednesday designed to enhance voter knowledge of the issue. Whether or not the state should convene a constitutional questions is one of two statewide ballot questions. Cory Lum/Civil Beat

The Citizens’ Jury included 18 Hawaii voters selected by the organizers to represent the diversity within Hawaii’s adult population. The organizers considered factors such as gender, age group, education level, ethnicity and political leanings. Panelists met on the evenings of Sept. 24, Oct. 1 and Oct. 8 at the William S. Richardson School of Law at UH Manoa. They first learned more about the ConCon ballot question, concentrating on legal, political, financial and historical facts. Panelists next met with selected proponents and opponents for the ConCon ballot initiative to discuss the relative merits for voting for or against the measure. At the last meeting, panelists deliberated among themselves and articulated the primary reasons for

both supporting and opposing the ConCon and listed the generally agreed-upon facts about the issue. As a final step, participants voted in a straw poll whether they support or oppose holding a ConCon (the poll found 12 jury members supporting the ConCon and six opposing it). All results were finalized into a one-page Citizens’ Jury statement made available to the general public via the project website. The Citizens’ Jury is based on similar processes in which citizens examine ballot initiatives in other western states, including Oregon, Arizona, California and Colorado. In each case, the process was used to increase voter awareness of the various pros and cons of a ballot initiative and articulate a set of generally agreed-upon facts regarding it. The Citizens’ Jury process is separate and distinct from partisan advocacy for or against a measure, or media op-ed pieces recommending which way to vote on a particular measure. Instead, the Citizens’ Jury Process allows voters to learn about ballot initiatives from their fellow citizens, rather than the media, political pressure groups, or politicians. The Citizens’ Jury project was co-sponsored by the Hawaii Community Foundation, the Collaborative Leaders Network, the University of Hawaii Public Policy Center, the Accord3.0 Network, the William S. Richardson School of Law and Common Cause. Here are links to the pdfs produced by the jury, including how many “jurors” support the ConCon: • • • •

Thoughts on this or any other story? Write a Letter to the Editor. Send to news@civilbeat.org and put Letter in the subject line. 200 words max. You need to use your name and city and include a contact phone for verification purposes. You can also comment directly on this story by scrolling down a little further. Comments are subject to approval and we may not publish every one.

Citizens' Jury Verdict on the ConCon

Citizens' Jury Verdict on the ConCon