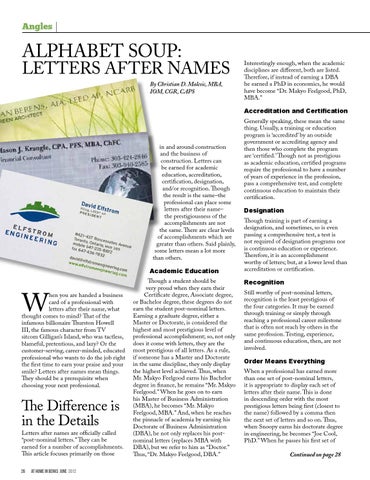 Interestingly enough, when the academic disciplines are different, both are listed. Therefore, if instead of earning a DBA he earned a PhD in economics, he would have become “Dr. Makyo Feelgood, PhD, MBA.” Accreditation and Certification

in and around construction and the business of construction. Letters can be earned for academic education, accreditation, certification, designation, and/or recognition. Though the result is the same–the professional can place some letters after their name– the prestigiousness of the accomplishments are not the same. There are clear levels of accomplishments which are greater than others. Said plainly, some letters mean a lot more than others. Academic Education

hen you are handed a business card of a professional with letters after their name, what thought comes to mind? That of the infamous billionaire Thurston Howell III, the famous character from TV sitcom Gilligan’s Island, who was tactless, blameful, pretentious, and lazy? Or the customer-serving, career-minded, educated professional who wants to do the job right the first time to earn your praise and your smile? Letters after names mean things. They should be a prerequisite when choosing your next professional.

The Difference is in the Details

Letters after names are officially called “post-nominal letters.” They can be earned for a number of accomplishments. This article focuses primarily on those 26

Though a student should be very proud when they earn their Certificate degree, Associate degree, or Bachelor degree, these degrees do not earn the student post-nominal letters. Earning a graduate degree, either a Master or Doctorate, is considered the highest and most prestigious level of professional accomplishment; so, not only does it come with letters, they are the most prestigious of all letters. As a rule, if someone has a Master and Doctorate in the same discipline, they only display the highest level achieved. Thus, when Mr. Makyo Feelgood earns his Bachelor degree in finance, he remains “Mr. Makyo Feelgood.” When he goes on to earn his Master of Business Administration (MBA), he becomes “Mr. Makyo Feelgood, MBA.” And, when he reaches the pinnacle of academia by earning his Doctorate of Business Administration (DBA), he not only replaces his postnominal letters (replaces MBA with DBA), but we refer to him as “Doctor.” Thus, “Dr. Makyo Feelgood, DBA.”

Generally speaking, these mean the same thing. Usually, a training or education program is ‘accredited’ by an outside government or accrediting agency and then those who complete the program are ‘certified.’ Though not as prestigious as academic education, certified programs require the professional to have a number of years of experience in the profession, pass a comprehensive test, and complete continuous education to maintain their certification. Designation Though training is part of earning a designation, and sometimes, so is even passing a comprehensive test, a test is not required of designation programs nor is continuous education or experience. Therefore, it is an accomplishment worthy of letters; but, at a lower level than accreditation or certification. Recognition Still worthy of post-nominal letters, recognition is the least prestigious of the four categories. It may be earned through training or simply through reaching a professional career milestone that is often not reach by others in the same profession. Testing, experience, and continuous education, then, are not involved. Order Means Everything When a professional has earned more than one set of post-nominal letters, it is appropriate to display each set of letters after their name. This is done in descending order with the most prestigious letters being first (closest to the name) followed by a comma then the next set of letters and so on. Thus, when Snoopy earns his doctorate degree in engineering, he becomes “Joe Cool, PhD.” When he passes his first set of Continued on page 28 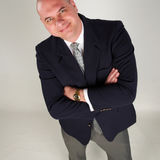