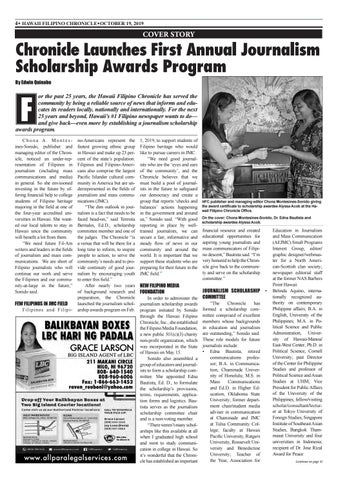 or the past 25 years, the Hawaii Filipino Chronicle has served the community by being a reliable source of news that informs and educates its readers locally, nationally and internationally. For the next 25 years and beyond, Hawaii’s #1 Filipino newspaper wants to do— and give back—even more by establishing a journalism scholarship awards program. Chona A.  Montesines-Sonido, publisher and managing editor of the Chronicle, noticed an under-representation of Filipinos in journalism (including mass communications and media) in general. So she envisioned investing in the future by offering financial help to college students of Filipino heritage majoring in the field at one of the four-year accredited universities in Hawaii. She wanted our local talents to stay in Hawaii since the community will benefit a lot from them. “We need future Fil-Am writers and leaders in the fields of journalism and mass communications. We are short of Filipino journalists who will continue our work and serve the Filipinos and our community-at-large in the future,” Sonido said.

no-Americans represent the fastest growing ethnic group in Hawaii and make up 23 percent of the state’s population. Filipinos and Filipino-Americans also comprise the largest Pacific Islander cultural community in America but are underrepresented in the fields of journalism and mass communications (JMC). “The dim outlook in journalism is a fact that needs to be faced head-on,” said Teresita Bernales, Ed.D., scholarship committee member and one of the judges. The Chronicle “is a venue that will be there for a long time to inform, to inspire people to action, to serve the community’s needs and to provide continuity of good journalism by encouraging youth to enter this field.” After nearly two years of background research and preparation, the Chronicle launched the journalism scholarship awards program on Feb.

1, 2019, to support students of Filipino heritage who would like to pursue careers in JMC. “We need good journalists who are the ‘eyes and ears of the community’, and the Chronicle believes that we must build a pool of journalists in the future to safeguard our democracy and create a group that reports ‘checks and balances’ actions happening in the government and around us,” Sonido said. “With good reporting in place by welltrained journalists, we can secure a fair, informative and steady flow of news in our community and around the world. It is important that we support these students who are preparing for their future in the JMC field.”

NEW FILIPINO MEDIA FOUNDATION In order to administer the journalism scholarship awards program initiated by Sonido through the Hawaii Filipino Chronicle, Inc., she established the Filipino Media Foundation, a new public 501(c)(3) charity non-profit organization, which was incorporated in the State of Hawaii on May 15. Sonido also assembled a group of educators and journalists to form a scholarship committee. She appointed Edna Bautista, Ed. D., to formulate the scholarship’s provisions, terms, requirements, application forms and logistics. Bautista serves as the journalism scholarship committee chair and is a non-voting member. “There weren’t many scholarships like this available at all when I graduated high school and went to study communication in college in Hawaii. So it’s wonderful that the Chronicle has established an important

financial resource and created educational opportunities for aspiring young journalists and mass communicators of Filipino descent,” Bautista said. “I’m very honored to help the Chronicle give back to the community and serve on the scholarship committee.” 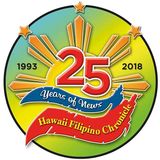