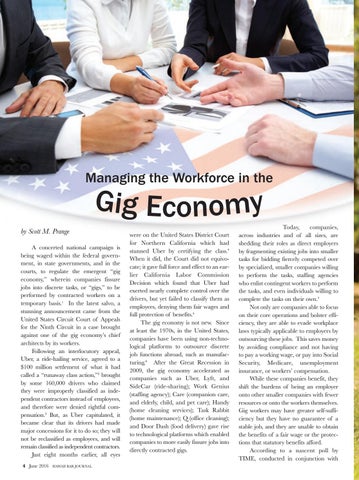 Managing the Workforce in the

A concerted national campaign is being waged within the federal government, in state governments, and in the courts, to regulate the emergent “gig economy,” wherein companies fissure jobs into discrete tasks, or “gigs,” to be performed by contracted workers on a temporary basis.1 In the latest salvo, a stunning announcement came from the United States Circuit Court of Appeals for the Ninth Circuit in a case brought against one of the gig economy’s chief architects by its workers. Following an interlocutory appeal, Uber, a ride-hailing service, agreed to a $100 million settlement of what it had called a “runaway class action,”2 brought by some 160,000 drivers who claimed they were improperly classified as independent contractors instead of employees, and therefore were denied rightful compensation.3 But, as Uber capitulated, it became clear that its drivers had made major concessions for it to do so; they will not be reclassified as employees, and will remain classified as independent contractors. Just eight months earlier, all eyes 4 June 2016

were on the United States District Court for Northern California which had stunned Uber by certifying the class.4 When it did, the Court did not equivocate; it gave full force and effect to an earlier California Labor Commission Decision which found that Uber had exerted nearly complete control over the drivers, but yet failed to classify them as employees, denying them fair wages and full protection of benefits.5 The gig economy is not new. Since at least the 1970s, in the United States, companies have been using non-technological platforms to outsource discrete job functions abroad, such as manufacturing.6 After the Great Recession in 2009, the gig economy accelerated as companies such as Uber, Lyft, and SideCar (ride-sharing); Work Genius (staffing agency); Care (companion care, and elderly, child, and pet care); Handy (home cleaning services); Task Rabbit (home maintenance); Q (office cleaning); and Door Dash (food delivery) gave rise to technological platforms which enabled companies to more easily fissure jobs into directly contracted gigs.

Today, companies, across industries and of all sizes, are shedding their roles as direct employers by fragmenting existing jobs into smaller tasks for bidding fiercely competed over by specialized, smaller companies willing to perform the tasks, staffing agencies who enlist contingent workers to perform the tasks, and even individuals willing to complete the tasks on their own.7 Not only are companies able to focus on their core operations and bolster efficiency, they are able to evade workplace laws typically applicable to employers by outsourcing these jobs. This saves money by avoiding compliance and not having to pay a working wage, or pay into Social Security, Medicare, unemployment insurance, or workers’ compensation. While these companies benefit, they shift the burdens of being an employer onto other smaller companies with fewer resources or onto the workers themselves. Gig workers may have greater self-sufficiency but they have no guarantee of a stable job, and they are unable to obtain the benefits of a fair wage or the protections that statutory benefits afford. According to a nascent poll by TIME, conducted in conjunction with