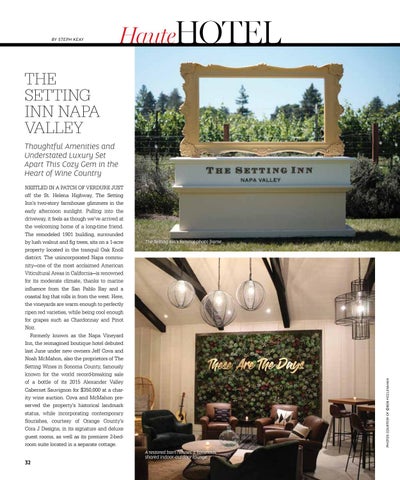 NESTLED IN A PATCH OF VERDURE JUST off the St. Helena Highway, The Setting Inn’s two-story farmhouse glimmers in the early afternoon sunlight. Pulling into the driveway, it feels as though we’ve arrived at the welcoming home of a long-time friend. The remodeled 1901 building, surrounded by lush walnut and fig trees, sits on a 1-acre property located in the tranquil Oak Knoll district. The unincorporated Napa community—one of the most acclaimed American Viticultural Areas in California—is renowned for its moderate climate, thanks to marine influence from the San Pablo Bay and a coastal fog that rolls in from the west. Here, the vineyards are warm enough to perfectly ripen red varieties, while being cool enough for grapes such as Chardonnay and Pinot Noir. Formerly known as the Napa Vineyard Inn, the reimagined boutique hotel debuted last June under new owners Jeff Cova and Noah McMahon, also the proprietors of The Setting Wines in Sonoma County, famously known for the world record-breaking sale of a bottle of its 2015 Alexander Valley Cabernet Sauvignon for $350,000 at a charity wine auction. Cova and McMahon preserved the property’s historical landmark status, while incorporating contemporary flourishes, courtesy of Orange County’s Cora J Designs, in its signature and deluxe guest rooms, as well as its premiere 2-bedroom suite located in a separate cottage.

THE WINE COUNTRY ISSUE: In this issue, we celebrate the grape and its many manifestations. Read about the top female winemakers who work hand-in-hand with Mother Nature to create splendid elixirs in “Crushing It: Female Winemakers.” Visit the region's top wineries offering outdoor experiences that meet CDC guidelines in our cover story, Social Distancing, Sunshine & Wine. 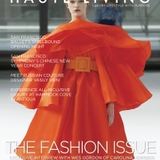