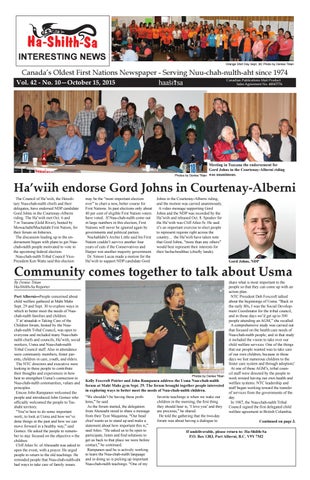 Meeting in Tsaxana the endorsement for Gord Johns in the Courtenay-Alberni riding was unanimous.

Ha’wiih endorse Gord Johns in Courtenay-Alberni The Council of Ha’wiih, the Hereditary Nuu-chah-nulth chiefs and their delegates, have endorsed NDP candidate Gord Johns in the Courtenay-Alberni riding. The Ha’wiih met Oct. 6 and 7 in Tsaxana (Gold River), hosted by Mowachaht/Muchalaht First Nation, for their forum on fisheries. The discussion leading up to the endorsement began with plans to get Nuuchah-nulth people motivated to vote in the upcoming federal election. Nuu-chah-nulth Tribal Council VicePresident Ken Watts said this election

may be the “most important election ever” to chart a new, better course for First Nations. In past elections only about 40 per cent of eligible First Nation voters have voted. If Nuu-chah-nulth come out in large numbers in this election, First Nations will never be ignored again by governments and political parties. Nuchahlaht’s Archie Little said his First Nation couldn’t survive another four years of cuts if the Conservatives and Harper win another majority government. Dr. Simon Lucas made a motion for the Ha’wiih to support NDP candidate Gord

Johns in the Courtenay-Alberni riding, and the motion was carried unanimously. A video message supporting Gord Johns and the NDP was recorded by the Ha’wiih and released Oct. 8. Speaker for the Ha’wiih was Cliff Atleo Sr. He said it’s an important exercise to elect people to represent regions right across the country… the Ha’wiih have taken note that Gord Johns, “more than any others” would best represent their interests for their ha-ha-houlthee (chiefly lands). Gord Johns, NDP

Port Alberni—People concerned about child welfare gathered at Maht Mahs Sept. 29 and Sept. 30 to explore ways in which to better meet the needs of Nuuchah-nulth families and children. T&#96;at&#96;atnaaluk – Taking Care of the Children forum, hosted by the Nuuchah-nulth Tribal Council, was open to everyone and included many Nuu-chahnulth chiefs and councils, Ha’wiih, social workers, Usma and Nuu-chah-nulth Tribal Council staff. Also in attendance were community members, foster parents, children in care, youth, and elders. The NTC directors and executive were looking to these people to contribute their thoughts and experiences in how best to strengthen Usma’s connection to Nuu-chah-nulth communities, values and principles. Emcee John Rampanen welcomed the people and introduced John Gomez who officially welcomed the people to Tseshaht territory. “You’re here to do some important work; to look at Usma and how we’ve done things in the past and how we can move forward in a healthy way,” said Gomez. He asked the people to remember to stay focused on the objective – the children. Cliff Atleo Sr. of Ahousaht was asked to open the event, with a prayer. He urged people to return to the old teachings. He reminded people that Nuu-chah-nulth-aht had ways to take care of family issues.

Kelly Foxcroft Poirier and John Rampanen address the Usma Nuu-chah-nulth forum at Maht Mahs gym Sept. 29. The forum brought together people interested in exploring ways to better meet the needs of Nuu-chah-nulth children. “We shouldn’t be having these problems,” he said. As the forum started, the delegation from Ahousaht stood to share a message from their Tyee Maquinna. “Our head chief wants us to stand up and make a statement about how important this is,” said Atleo. “He asked us to be open to participate, listen and find solutions to get us back to that place we were before contact,” he continued. Rampanen said he is actively working to learn the Nuu-chah-nulth language and in doing so is picking up important Nuu-chah-nulth teachings. “One of my

favorite teachings is when we wake our children in the morning, the first thing they should hear is, ‘I love you’ and they are precious,” he shared. He told the gathering that the two-day forum was about having a dialogue to

share what is most important to the people so that they can come up with an action plan. NTC President Deb Foxcroft talked about the beginnings of Usma. “Back in the early 80s, I was the Social Development Coordinator for the tribal council, and in those days we’d get up to 500 people attending an AGM,” she recalled. A comprehensive study was carried out that focused on the health care needs of Nuu-chah-nulth people; and in that study it included the vision to take over our child welfare services. One of the things that our people wanted was to take care of our own children, because in those days we lost numerous children to the foster care system and through adoption.‎ At one of those AGM’s, tribal council staff were directed by the people to work toward having our own health and welfare systems. NTC leadership and staff began working toward the transfer of services from the governments of the day. In 1987, the Nuu-chah-nulth Tribal Council signed the first delegated child welfare agreement in British Columbia. Continued on page 3.