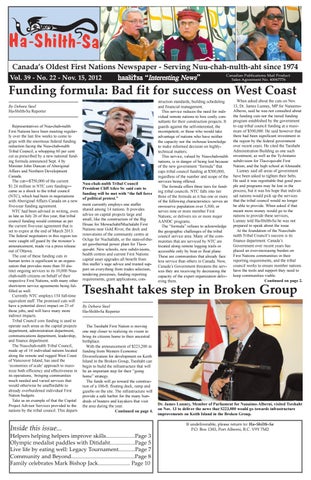 Funding formula: Bad fit for success on West Coast By Debora Steel Ha-Shilth-Sa Reporter Representatives of Nuu-chah-nulth First Nations have been meeting regularly over the last few weeks to come to grips with the enormous federal funding reduction facing the Nuu-chah-nulth Tribal Council; a whopping 60 per cent cut as prescribed by a new national funding formula announced Sept. 4 by Minister John Duncan of Aboriginal Affairs and Northern Development Canada. The cut—$750,000 of the current $1.24 million in NTC core funding— came as a shock to the tribal council (NTC), which had been in negotiations with Aboriginal Affairs Canada on a new five-year funding agreement. NTC had been advised in writing, even as late as July 26 of this year, that tribal council funding would continue as per the current five-year agreement that is set to expire at the end of March 2013. The federal negotiators in this region too were caught off guard by the minister’s announcement, made via a press release out of Ottawa. The cost of these funding cuts in human terms is significant to an organization that provides more than 50 distinct ongoing services to its 10,000 Nuuchah-nulth citizens on behalf of their respective First Nations, with many other short-term service agreements being fulfilled as well. Currently NTC employs 154 full-time equivalent staff. The promised cuts will have a potential direct impact on 25 of those jobs, and will have many more indirect impacts. Tribal Council core funding is used to operate such areas as the capital projects department, administration department, communications department, leadership, and finance department. The Nuu-chah-nulth Tribal Council, made up of 14 individual nations located along the remote and rugged West Coast of Vancouver Island, has used the ‘economies of scale’ approach to maximize both efficiency and effectiveness in its operations, bringing communities much needed and varied services that would otherwise be unaffordable to already overburdened individual First Nation budgets. Take as an example of that the Capital Project Advisor Services provided to the nations by the tribal council. This depart-

Nuu-chah-nulth Tribal Council President Cliff Atleo Sr. said cuts to funding will be met with “the full force of political protest.” ment currently employs one staffer shared among 14 nations. It provides advice on capital projects large and small, like the construction of the Big House for Mowachaht/Muchalaht First Nations near Gold River, the dock and renovations of the community centre at Ocluje for Nuchatlaht, or the state-of-theart geo-thermal power plant for Tla-oqui-aht. New schools, new subdivisions, health centres and current First Nations capital asset upgrades all benefit from this staffer’s sage advice and trusted support on everything from trades selection, tendering processes, funding reporting requirements, grant applications, con-

struction standards, building scheduling and financial management. This service reduces the need for individual remote nations to hire costly consultants for their construction projects. It guards against the self-interested, the incompetent, or those who would take advantage of nations who have neither the capacity nor the in-house knowledge to make informed decision on highlytechnical matters. This service, valued by Nuu-chah-nulth nations, is in danger of being lost because of the new government “formula” that caps tribal council funding at $500,000, regardless of the number and scope of the services being offered. The formula offers three tiers for funding tribal councils. NTC falls into tier three of the formula as it has one or more of the following characteristics: serves an on-reserve population over 5,500; or serves nine or more member First Nations; or delivers six or more major AANDC programs. The “formula” refuses to acknowledge the geographic challenges of the tribal council service area. Many of the communities that are serviced by NTC are located along remote logging trails or accessible only by boat or float plane. These are communities that already face less service than others in Canada. Now, Canada’s Government threatens the services they are receiving by decreasing the capacity of the expert organization delivering them.

When asked about the cuts on Nov. 13, Dr. James Lunney, MP for NanaimoAlberni, said he was not consulted about the funding cuts nor the tiered funding program established by the government to cap tribal council funding at a maximum of $500,000. He said however that there had been significant investment in the region by the federal government over recent years. He cited the Tseshaht Administration Building as one such investment, as well as the Ty-histanis subdivision for Tla-o-qui-aht First Nation, and the high school at Ahousaht. Lunney said all areas of government have been asked to tighten their belts. He said it was regrettable that good people and programs may be lost in the process, but it was his hope that individual nations would pick up the services that the tribal council would no longer be able to provide. When asked if that meant more money would go to the nations to provide these services, Lunney told Ha-Shilth-Sa he was not prepared to speak about the issue. At the foundation of the Nuu-chahnulth Tribal Council’s success is its finance department. Canada’s Government over recent years has placed an ever-increasing burden on First Nations communities in their reporting requirements, and the tribal council works to ensure member nations have the tools and support they need to keep communities viable. Continued on page 2.

Tseshaht takes step in Broken Group By Debora Steel Ha-Shilth-Sa Reporter The Tseshaht First Nation is moving one step closer to realizing its vision to bring its citizens home to their ancestral birthplace. With the announcement of $223,200 in funding from Western Economic Diversification for development on Keith Island in the Broken Group, Tseshaht can begin to build the infrastructure that will be an important step for their “going home” strategy. The funds will go toward the construction of a 100-ft. floating dock, ramp and gazebo on the site. The infrastructure will provide a safe harbor for the many hundreds of boaters and kayakers that visit the area during the year. Continued on page 4.

Dr. James Lunney, Member of Parliament for Nanaimo-Alberni, visited Tseshaht on Nov. 13 to deliver the news that $223,000 would go towards infrastructure improvements on Keith Island in the Broken Group. If undeliverable, please return to: Ha-Shilth-Sa P.O. Box 1383, Port Alberni, B.C. V9Y 7M2