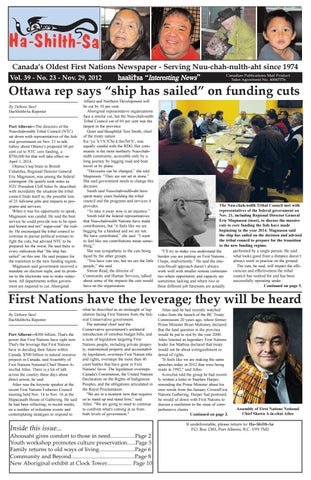 Ottawa rep says “ship has sailed” on funding cuts By Debora Steel Ha-Shilth-Sa Reporter Port Alberni—The directors of the Nuu-chah-nulth Tribal Council (NTC) sat down with representatives of the federal government on Nov. 21 to talk turkey about Ottawa’s proposed 60 per cent cut to NTC core funding, a $750,000 hit that will take effect on April 1, 2014. Ottawa’s top brass in British Columbia, Regional Director General Eric Magnuson, was among the federal contingent. He quietly took notes as NTC President Cliff Atleo Sr. described with incredulity the situation the tribal council finds itself in, the possible loss of 25 full-time jobs and impacts to programs and services. When it was his opportunity to speak, Magnuson was candid. He said the best service he could provide was to be open and honest and not” sugar-coat” the reality. He encouraged the tribal council to continue to pursue political avenues to fight the cuts, but advised NTC to be prepared for the worst. He said there is every indication that “the ship has sailed” on this one. He said prepare for the transition to the new funding regime. Magnuson said government received a mandate on election night, and its promise to the electorate was to make reductions. All departments within government are required to cut. Aboriginal

Affairs and Northern Development will be cut by 10 per cent. Aboriginal representative organizations face a similar cut, but the Nuu-chah-nulth Tribal Council cut of 60 per cent was the largest in the province. Quiet and thoughtful Tess Smith, chief of the treaty nation Ka:’yu:’k’t’h’/Che:k:tles7et’h’, was equally candid with the RDG. Her community is the most northerly Nuu-chahnulth community, accessible only by a long journey by logging road and boat travel or by plane. “Decisions can be changed,” she told Magnuson. “They are not set in stone.” She said government needs to change this decision. Smith said Nuu-chah-nulth-aht have spent many years building the tribal council and the programs and services it provides. “To take it away now is an injustice.” Smith told the federal representatives that Nuu-chah-nulth Nations have made contributions, but “it feels like we are begging for a handout and we are not. We have contributed,” she said. “I want to feel like our contributions mean something.” She was sympathetic to the cuts being faced by the other groups. “You have cuts too, but we are the little people,” she said. Simon Read, the director of Community and Human Services, talked about some of the impacts the cuts would have on the organization.

The Nuu-chah-nulth Tribal Council met with representatives of the federal government on Nov. 21, including Regional Director General Eric Magnuson (inset), to discuss the massive cuts to core funding the feds have made beginning in the year 2014. Magnuson said the ship has sailed on the decision and advised the tribal council to prepare for the transition to the new funding regime. performed by a single person. He said “I’ll try to make you understand the burden you are putting on First Nations… what looks good from a distance doesn’t always work in practise on the ground. I hope, inadvertently.” He said the oneThe cuts, he said, will impact the effisize-fits-all approach doesn’t always work well with smaller remote communi- ciencies and effectiveness the tribal council has worked for and has been ties where opportunity and capacity are successfully operating under. sometimes lacking and where two or Continued on page 5. three different job functions are actually

what he described as an onslaught of legislation facing First Nations from the federal Conservative government. The national chief said the Conservative government&#39;s unilateral introduction of omnibus budget bills, and a suite of legislation targeting First Nations people, including private property, matrimonial property and accountability legislation, oversteps First Nation title and rights, oversteps the more than 40 court battles that have gone in First Nations&#39; favor. The legislation oversteps Canada&#39;s Constitution, the United Nations Declaration on the Rights of Indigenous Peoples, and the obligations articulated in the Royal Proclamation. &quot;We are in a moment now that requires us to stand up and stand firm,&quot; said Atleo. &quot;We are going to need to continue to confront what&#39;s coming at us from both levels of government.&quot;

Atleo said he had recently watched video from the launch of the BC Treaty Commission 20 years ago, where former Prime Minister Brian Mulroney declared that the land question in the province would be put to rest by the year 2000. Atleo listened as legendary First Nations leader Joe Mathias declared that treaty would not be about extinguishment or denial of rights. &quot;It feels like we are making the same speeches today in 2012 that were being made in 1992,&quot; said Atleo. A-in-chut told the group he had recently written a letter to Stephen Harper, reminding the Prime Minister about his own words from the January Crown/First Nations Gathering. Harper had promised he would sit down with First Nations to discuss a resolution to the issue of comprehensive claims. Continued on page 3.