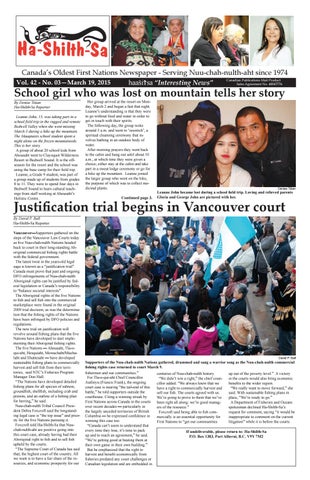 Leanne John, 15, was taking part in a school field trip in the rugged and remote Bedwell Valley when she went missing March 3 during a hike up the mountain. The Maaqtusiis school student spent a night alone on the frozen mountainside. This is her story. A group of about 20 school kids from Ahousaht went to Clayoquot Wilderness Resort in Bedwell Sound. It is the offseason for the resort and the school was using the base camp for their field trip. Leanne, a Grade 9 student, was part of a group made up of students from grades 8 to 11. They were to spend four days in Bedwell Sound to learn cultural teachings from staff working at Ahousaht’s Holistic Centre.

Her group arrived at the resort on Monday, March 2 and began a fast that night. Leanne’s understanding is that they were to go without food and water in order to get in touch with their spirits. The following day, the group woke around 5 a.m. and went to ‘oosimch’, a spiritual cleansing ceremony that involves bathing in an outdoor body of water. After morning prayers they went back to the cabin and hung out until about 10 a.m., at which time they were given a choice; either stay at the cabin and take part in a sweat lodge ceremony or go for a hike up the mountain. Leanne joined the larger group who went on the hike, the purpose of which was to collect medicinal plants.

Leanne John became lost during a school field trip. Loving and relieved parents Gloria and George John are pictured with her.

Justification trial begins in Vancouver court By David P. Ball Ha-Shilth-Sa Reporter Vancouver—Supporters gathered on the steps of the Vancouver Law Courts today as five Nuu-chah-nulth Nations headed back to court in their long-standing Aboriginal commercial fishing rights battle with the federal government. The latest twist in the years-old legal saga is known as a “justification trial”. Canada must prove that past and ongoing DFO infringements of Nuu-chah-nulth Aboriginal rights can be justified by federal legislation or Canada’s responsibility to “balance societal interests”. The Aboriginal rights of the five Nations to fish and sell fish into the commercial marketplace were found in the original 2009 trial decision, as was the determination that the fishing rights of the Nations have been infringed by DFO policies and regulations. The new trial on justification will revolve around fishing plans that the five Nations have developed to start implementing their Aboriginal fishing rights. The five Nations — Ahousaht, Tla-oqui-aht, Hesquiaht, Mowachaht/Muchalaht and Ehattesaht — have developed sustainable fishing plans to commercially harvest and sell fish from their territories, said NTC’s Fisheries Program Manager Don Hall. “The Nations have developed detailed fishing plans for all species of salmon, groundfish, shellfish, including crab and prawns, and an outline of a fishing plan for herring,” he said. Nuu-chah-nulth Tribal Council President Debra Foxcroft said the longstanding legal case is “the top issue” and priority for the five Nations pursuing it. Foxcroft told Ha-Shilth-Sa that Nuuchah-nulth-aht are positive going into this court case, already having had their Aboriginal right to fish and to sell fish upheld by the courts. “The Supreme Court of Canada has said that; the highest court of the country. All we want is to have a fair share of the resources, and economic prosperity for our

Supporters of the Nuu-chah-nulth Nations gathered, drummed and sang a warrior song as the Nuu-chah-nulth commercial fishing rights case returned to court March 9. fishermen and our communities.” centuries of Nuu-chah-nulth history. up out of the poverty level.” A victory For Tla-o-qui-aht Chief Councillor “We didn’t win a right,” the chief counin the courts would also bring economic Autlieyu (Francis Frank), the ongoing cillor added. “We always knew that we benefits to the wider region. court case is nearing “the tail-end of this have a right to commercially harvest and “We really want to move forward,” she battle,” he told supporters outside the sell our fish. The courts agreed with us. said. With sustainable fishing plans in courthouse. Citing a winning streak by We’re going to prove to them that we’ve place, “We’re ready to go.” First Nations across Canada in the courts been right all along: we’re good managA Department of Fisheries and Oceans over recent decades — particularly in ers of the resource.” spokesman declined Ha-Shilth-Sa’s the largely unceded territories of British Foxcroft said being able to fish comrequest for comment, saying “it would be Columbia — he expressed confidence in mercially is an essential opportunity for inappropriate to comment on the current winning this case too. First Nations to “get our communities litigation” while it is before the courts. “Canada can’t seem to understand that every time they lose, it’s time to pack If undeliverable, please return to: Ha-Shilth-Sa up and to reach an agreement,” he said. P.O. Box 1383, Port Alberni, B.C. V9Y 7M2 “We’re getting good at beating them at their own game in their own building.” But he emphasized that the right to harvest and benefit economically from fisheries predated any court challenges or Canadian legislation and are embedded in