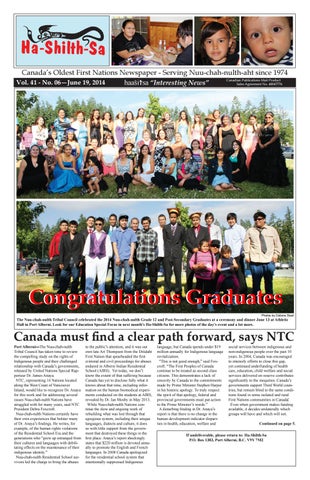 The Nuu-chah-nulth Tribal Council celebrated the 2014 Nuu-chah-nulth Grade 12 and Post-Secondary Graduates at a ceremony and dinner June 13 at Athletic Hall in Port Alberni. Look for our Education Special Focus in next month’s Ha-Shilth-Sa for more photos of the day’s event and a lot more.

Canada must find a clear path forward, says NTC Port Alberni—The Nuu-chah-nulth Tribal Council has taken time to review the compelling study on the rights of Indigenous people and their challenged relationship with Canada’s governments, released by United Nations Special Rapporteur Dr. James Anaya. NTC, representing 14 Nations located along the West Coast of Vancouver Island, would like to recognize Dr. Anaya for this work and for addressing several issues Nuu-chah-nulth Nations have struggled with for many years, said NTC President Debra Foxcroft. Nuu-chah-nulth Nations certainly have their own experiences that bolster many of Dr. Anaya’s findings. He writes, for example, of the human rights violations of the Residential School Era and the generations who “grew up estranged from their cultures and languages with debilitating effects on the maintenance of their indigenous identity.” Nuu-chah-nulth Residential School survivors led the charge to bring the abuses

to the public’s attention, and it was our own late Art Thompson from the Ditidaht First Nation that spearheaded the first criminal and civil proceedings for abuses endured in Alberni Indian Residential School (AIRS). Yet today, we don’t know the extent of that suffering because Canada has yet to disclose fully what it knows about that time, including information on the human biomedical experiments conducted on the students at AIRS, revealed by Dr. Ian Mosby in May 2013. While Nuu-chah-nulth Nations continue the slow and ongoing work of rebuilding what was lost through that egregious system, including their unique languages, dialects and culture, it does so with little support from the government that destroyed these things in the first place. Anaya’s report shockingly states that $220 million is devoted annually to promote the English and French languages. In 2008 Canada apologized for the residential school system that intentionally suppressed Indigenous

language, but Canada spends under $19 million annually for Indigenous language revitalization. “This is not good enough,” said Foxcroft. “The First Peoples of Canada continue to be treated as second class citizens. This demonstrates a lack of sincerity by Canada to the commitments made by Prime Minister Stephen Harper in his historic apology. To truly respect the spirit of that apology, federal and provincial governments must put action to the Prime Minister’s words.” A disturbing finding in Dr. Anaya’s report is that there is no change in the human development indicator disparities in health, education, welfare and

social services between indigenous and non-indigenous people over the past 10 years. In 2004, Canada was encouraged to intensify efforts to close this gap, yet continued underfunding of health care, education, child welfare and social services delivered on reserve contributes significantly to the inequities. Canada’s governments support Third World countries, but remain blind to the same conditions found in some isolated and rural First Nations communities in Canada‎. Even when government makes funding available, it decides unilaterally which groups will have and which will not.