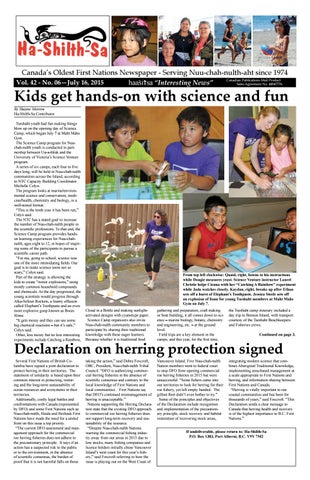 Kids get hands-on with science and fun By Shayne Morrow Ha-Shilth-Sa Contributor Tseshaht youth had fun making things blow up on the opening day of Science Camp, which began July 7 at Maht Mahs Gym. The Science Camp program for Nuuchah-nulth youth is conducted in partnership between Uu-a-thluk and the University of Victoria’s Science Venture program. A series of six camps, each four to five days long, will be held in Nuu-chah-nulth communities across the Island, according to NTC Capacity Building Coordinator Michelle Colyn. The program looks at marine/environmental science and conservation, medicine/health, chemistry and biology, in a well-tested format. “This is the tenth year it has been run,” Colyn said. The NTC has a stated goal to increase the number of Nuu-chah-nulth people in the scientific professions. To that end, the Science Camp program provides handson learning experiences for Nuu-chahnulth, ages eight to 12, in hopes of inspiring some of the participants to pursue a scientific career path. “For me, going to school, science was one of the more intimidating fields. Our goal is to make science seem not so scary,” Colyn said. Part of the strategy is allowing the kids to create “minor explosions,” using mostly common household compounds and chemicals. As the day progressed, the young scientists would progress through Alka-Seltzer Rockets, a foamy effusion called Elephant’s Toothpaste and an even more explosive goop known as Borax Slime. “It gets messy and they can see some big chemical reactions – but it’s safe,” Colyn said. Other, less messy but no less interesting experiments include Catching a Rainbow,

Cloud in a Bottle and making sunlightactivated designs with cyanotype paper. Science Camp organizers also invite Nuu-chah-nulth community members to participate by sharing their traditional knowledge with these eager learners. Because whether it is traditional food

gathering and preparation, craft making or boat building, it all comes down to science – marine biology, botany, chemistry and engineering, etc. – at the ground level. Field trips are a key element in the camps, and this year, for the first time,

the Tseshaht camp itinerary included a day trip to Benson Island, with transport courtesy of the Tseshaht Beachkeepers and Fisheries crews.

Several First Nations of British Columbia have signed a joint declaration to protect herring in their territories. The statement of solidarity is based upon their common interest in protecting, restoring and the long-term sustainability of ocean resources and ecosystems in their territories. Additionally, costly legal battles and confrontations with Canada (represented by DFO) and some First Nations such as Nuu-chah-nulth, Haida and Heiltsuk First Nations have made the need for a united front on this issue a top priority. “The current DFO assessment and management approach for the commercial roe herring fisheries does not adhere to the precautionary principle. It says if an action has a suspected risk to the public or to the environment, in the absence of scientific consensus, the burden of proof that it is not harmful falls on those

taking the action,” said Debra Foxcroft, OBC, President, Nuu-chah-nulth Tribal Council. “DFO is authorizing commercial herring fisheries in the absence of scientific consensus and contrary to the local knowledge of First Nations and local communities. First Nations say that DFO’s continued mismanagement of herring is unacceptable.” Nations supporting the Herring Declaration state that the existing DFO approach to commercial roe herring fisheries does not support long-term recovery and sustainability of the resource. “Despite Nuu-chah-nulth Nations warning the commercial fishing industry away from our areas in 2015 due to low stocks, many fishing companies and licence holders initially chose Vancouver Island’s west coast for this year’s fishery,” said Foxcroft referring to how the issue is playing out on the West Coast of

Vancouver Island. Five Nuu-chah-nulth Nation members went to federal court to stop DFO from opening commercial roe herring fisheries in 2015 but were unsuccessful. “Seine fishers came into our territories to look for herring for their roe fishery, yet left empty handed. The gillnet fleet didn’t even bother to try.” Some of the principles and objectives of the Declaration include recognition and implementation of the precautionary principle, stock recovery and habitat restoration of recovering stock areas,

integrating modern science that combines Aboriginal Traditional Knowledge, implementing area-based management at a scale appropriate to First Nations and herring, and information sharing between First Nations and Canada. “Herring is vitally important to our coastal communities and has been for thousands of years,” said Foxcroft. “This Declaration sends a clear message to Canada that herring health and recovery is of the highest importance to B.C. First Nations.”

From top left clockwise: Quaid, right, listens to his instructions while Dougie measures yeast. Science Venture instructor Laurel Christie helps Cienna with her “Catching A Rainbow” experiment while Jada watches closely. Kaydan, right, breaks up after Ethan sets off a burst of Elephant’s Toothpaste. Jessica Steele sets off an explosion of foam for young Tseshaht members at Maht Mahs Gym on July 7.