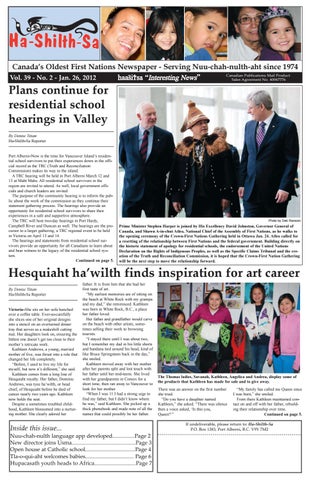 Prime Minister Stephen Harper is joined by His Excellency David Johnston, Governor General of Canada, and Shawn A-in-chut Atleo, National Chief of the Assembly of First Nations, as he walks to the opening ceremony of the Crown-First Nations Gathering held in Ottawa Jan. 24. Atleo called for a resetting of the relationship between First Nations and the federal government. Building directly on the historic statement of apology for residential schools, the endorsement of the United Nations Declaration on the Rights of Indigenous Peoples, as well as the Specific Claims Tribunal and the creation of the Truth and Reconciliation Commission, it is hoped that the Crown-First Nation Gathering will be the next step to move the relationship forward.

Hesquiaht ha’wilth finds inspiration for art career By Denise Titian Ha-Shilth-Sa Reporter Victoria–She sits on her sofa hunched over a coffee table. Ever-so-carefully she slices one of her original designs into a stencil on an overturned dinner tray that serves as a makeshift cutting mat. Her daughters look on, ensuring the littlest one doesn’t get too close to their mother’s intricate work. Kathleen Andrews, a young, married mother of five, was thrust into a role that changed her life completely. “Before, I used to live my life for myself, but now it’s different,” she said. Kathleen comes from a long line of Hesquiaht royalty. Her father, Dominic Andrews, was tyee ha’wilth, or head chief, of Hesquiaht before he died of cancer nearly two years ago. Kathleen now holds the seat. Despite a sometimes troubled childhood, Kathleen blossomed into a nurturing mother. She clearly adored her

father. It is from him that she had her first taste of art. “My earliest memories are of sitting on the beach at White Rock with my grampa and my dad,” she reminisced. Kathleen was born in White Rock, B.C., a place her father loved. Her father and grandfather would carve on the beach with other artists, sometimes selling their work to browsing tourists. “I stayed there until I was about two, but I remember my dad in his little shorts and bandana tied around his head, kind of like Bruce Springsteen back in the day,” she smiled. Kathleen moved away with her mother after her parents split and lost touch with her father until her mid-teens. She lived with her grandparents in Comox for a short time, then ran away to Vancouver to look for her mother. “When I was 11 I had a strong urge to find my father, but I didn’t know where he was,” said Kathleen. She picked up a thick phonebook and made note of all the names that could possibly be her father.

The Thomas ladies, Savanah, Kathleen, Angelica and Andrea, display some of the products that Kathleen has made for sale and to give away. There was an answer on the first number she tried. “Do you have a daughter named Kathleen,” she asked. “There was silence then a voice asked, ‘Is this you, Queen?’”

“My family has called me Queen since I was born,” she smiled. From there Kathleen maintained contact on and off with her father, rebuilding their relationship over time. Continued on page 5.