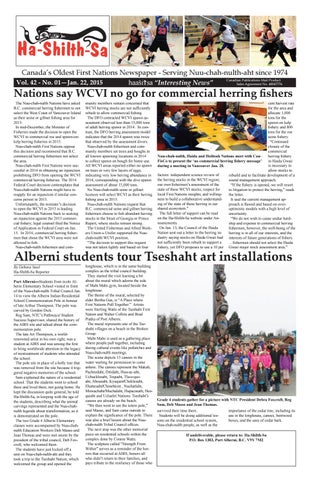 munity members remain concerned that WCVI herring stocks are not sufficiently rebuilt to allow commercial fishing. The DFO contracted WCVI spawn assessment observed less than 15,000 tons of adult herring spawn in 2014. In contrast, the DFO herring assessment model indicates that the 2014 spawn was twice that observed by the assessment divers. Nuu-chah-nulth fishermen and community members set trees and boughs in all known spawning locations in 2014 to collect spawn on bough for home use. All WCVI areas reported either no spawn on trees or very few layers of eggs, indicating very low herring abundance in 2014, corresponding with the dive spawn assessment of about 15,000 tons. No Nuu-chah-nulth seine or gillnet licences will select WCVI as their herring fishing area in 2015. Nuu-chah-nulth Nations request that B.C. commercial seine and gillnet herring fishermen choose to fish abundant herring stocks in the Strait of Georgia or Prince Rupert, where stocks remain strong. The United Fisherman and Allied Workers Union – Unifor supported the Nuuchah-nulth WCVI position. “The decision to support this request was not taken lightly and based on four

longhouse, which is in the same building complex as the tribal council building. They started the visit learning a bit about the mural which adorns the side of Maht Mahs gym, located beside the longhouse. The theme of the mural, selected by elder Bertha Gus, is “A Place where First Nations Pull Together.” Artists were Sterling Watts of the Tseshaht First Nation and Walter Collins and Brad Piatka of Port Alberni. The mural represents one of the Tseshaht villages on a beach in the Broken Group. Maht Mahs is used as a gathering place where people pull together, including during cultural events like potlatches and Nuu-chah-nulth meetings. The scene depicts 15 canoes in the water waiting for permission to come ashore. The canoes represent the Makah, Pacheedaht, Ditidaht, Huu-ay-aht, Uchucklesaht, Toquaht, Tla-o-quiaht, Ahousaht, Kyuquot/Cheklesaht, Ehattesaht/Chinehkint , Nuchatlaht, Mowachaht/Muchalaht, Hupacasath, Hesquiaht and Ucluelet Nations. Tseshaht’s canoes are already on the beach. “We then went to see the totem pole,” said Masso, and Sam came outside to explain the significance of the pole. There was also a brief lesson about the Nuuchah-nulth Tribal Council offices. The next stop was the other memorial piece on residential schools within the complex done by Connie Watts. The sculpture called “Strength From Within” serves as a reminder of the horrors that occurred at AIRS, honors all who didn’t return to their families, and pays tribute to the resiliency of those who

cent harvest rate for the area and allocate 1,000 tons for the spawn on kelp fishery and 800 tons for the roe seine fishery. “Continued closure of the commercial herring fishery Nuu-chah-nulth, Haida and Heiltsuk Nations meet with Canin Haida Gwaii FisCo to present the ‘no commercial herring fishery message’ is necessary to during a meeting in Vancouver Jan. 20. allow stocks to factors: independent science review of rebuild and to facilitate development of a the herring stocks in the WCVI region; sound management approach. our own fishermen’s assessment of the “If the fishery is opened, we will resort state of these WCVI stocks; respect for to litigation to protect the herring,” reads local First Nations insights; and willingthe letter. ness to build a collaborative understandIt said the current management aping of the state of these herring in our proach is flawed and based on overshared ecosystem.” optimistic models with a high level of The full letter of support can be read uncertainty. on the Ha-Shilth-Sa website under An“We do not wish to cause undue hardnouncments. ship and expense to commercial herring On Jan. 13, the Council of the Haida fishermen, however, the well-being of the Nation sent out a letter to the herring inherring is in all of our interests, and the dustry saying stocks on Haida Gwaii had interests of future generations of fishers. not sufficiently been rebuilt to support a …fishermen should not select the Haida fishery, yet DFO proposes to use a 10 per Gwaii major stock assessment area.”

Port Alberni—Students from école Alberni Elementary School visited in front of the Nuu-chah-nulth Tribal Council Jan. 14 to view the Alberni Indian Residential School Commemoration Pole in honour of late Arthur Thompson. The pole was carved by Gordon Dick. Reg Sam, NTC’s Pathways/ Student Success Supervisor, shared the history of the AIRS site and talked about the commemoration pole. The late Art Thompson, a worldrenowned artist in his own right, was a student at AIRS and was among the first to bring worldwide attention to the legacy of mistreatment of students who attended the school. The pole sits in place of a holly tree that was removed from the site because it triggered negative memories of the school. Sam explained the nature of a residential school. That the students went to school there and lived there, not going home. He kept the discussion quite general, he told Ha-Shilth-Sa, in keeping with the age of the students, describing what the animal carvings represented and the Nuu-chahnulth legends about transformation, as it is demonstrated on the pole. The two Grade 4 Alberni Elementary classes were accompanied by Nuu-chahnulth Education Workers Deb Masso and Jean Thomas and were met onsite by the president of the tribal council, Deb Foxcroft, who welcomed them. The students have just kicked off a unit on Nuu-chah-nulth-aht and they took a trip to the Tseshaht Nation, which welcomed the group and opened the

Grade 4 students gather for a picture with NTC President Debra Foxcroft, Reg Sam, Deb Masso and Jean Thomas. survived their time there. Students will be doing additional lessons on the residential school system, Nuu-chah-nulth people, as well as the

importance of the cedar tree, including its use in the longhouse, canoes, bentwood boxes, and the uses of cedar bark.