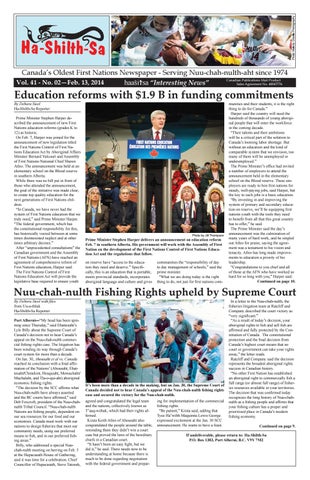 Education reforms with $1.9 B in funding commitments By Debora Steel Ha-Shilth-Sa Reporter

Prime Minister Stephen Harper delivers an announcement on education reform Feb. 7 in southern Alberta. His government will work with the Assembly of First Nation on the development of the First Nations Control of First Nations Education Act and the regulations that follow. on reserve have “access to the education they need and deserve.” Specifically, this is an education that is portable, meets provincial standards, incorporates aboriginal language and culture and gives

communities the “responsibility of day to day management of schools,” said the prime minister. “What we are doing today is the right thing to do, not just for first nations com-

munities and their students, it is the right thing to do for Canada.” Harper said the country will need the hundreds of thousands of young aboriginal people that will enter the workforce in the coming decade. “Their talents and their ambitions will be a critical part of the solution to Canada’s looming labor shortage. But without an education and the kind of comparable system that we envision, too many of them will be unemployed or underemployed.” The Prime Minister’s office had invited a number of employers to attend the announcement held in the elementary school on the Blood reserve. These employers are ready to hire first nations for steady, well-paying jobs, said Harper, but the key to such jobs is a basic education. “By investing in and improving the system of primary and secondary education on reserve, we’ll be equipping first nations youth with the tools they need to benefit from all that this great country has to offer,” he said. The Prime Minister said the day’s announcement was the culmination of many years of hard work, and he singled out Atleo for praise, saying the agreement was a testament to his vision and tenacity. Atleo has long made improvements to education a priority of his leadership. “Congratulations to you chief and all of those at the AFN who have worked so hard for so long with you,” Harper said. Continued on page 10.

Port Alberni—“My head has been spinning since Thursday,” said Ehattesaht’s Lyle Billy about the Supreme Court of Canada’s decision not to hear Canada’s appeal on the Nuu-chah-nulth commercial fishing rights case. The litigation has been winding its way through Canada’s court system for more than a decade. On Jan. 30, Ahousaht et al vs. Canada reached its conclusion with a final affirmation of the Nations’ (Ahousaht, Ehattesaht/Chinekint, Hesquiaht, Mowachaht/ Muchalaht, and Tla-o-qui-aht) aboriginal economic fishing rights. “The decision by the SCC affirms what Nuu-chah-nulth have always asserted and the BC courts have affirmed,” said Deb Foxcroft, president of the Nuu-chahnulth Tribal Council. “Nuu-chah-nulth Nations are fishing people, dependent on our sea resources for our food and our economies. Canada must work with our nations to design fisheries that meet our community needs, using our preferred means to fish, and in our preferred fishing areas.” Billy, who addressed a special Nuuchah-nulth meeting on herring on Feb. 5 at the Hupacasath House of Gathering, said it was time for a celebration. Chief Councillor of Hupacasath, Steve Tatoosh,

It’s been more than a decade in the making, but on Jan. 30, the Supreme Court of Canada decided not to hear Canada’s appeal of the Nuu-chah-nulth fishing rights case and secured the victory for the Nuu-chah-nulth. agreed and congratulated the legal team and the nations, collectively known as T’aaq-wiihak, which had their rights affirmed. Kiista Keith Atleo of Ahousaht also congratulated the people around the table, reminding them they didn’t win a court case but proved the laws of the hereditary chiefs in a Canadian court. “It hasn’t been an easy fight, but we did it,” he said. There needs now to be understanding at home because there is much to be done regarding negotiation with the federal government and prepar-

ing for implementation of the commercial fishing rights. “Be patient,” Kiista said, adding that Tyee Ha’wilth Maquinna Lewis George expressed excitement at the Jan. 30 SCC announcement. He wants to have a feast.

In a letter to the Nuu-chah-nulth, the fisheries litigation team at Ratcliff and Company described the court victory as “very significant.” “As a result of today’s decision, your aboriginal rights to fish and sell fish are affirmed and fully protected by the Constitution of Canada. The constitutional protection and the final decision from Canada’s highest court means that no court or government can take your rights away,” the letter reads. Ratcliff and Company said the decision represents the broadest aboriginal rights success in Canadian history. “No other First Nation has established an aboriginal right to commercially fish a full range (or almost full range) of fisheries resources available in your territories. The decision that was confirmed today recognizes the long history of Nuu-chahnulth as a fishing people and affirms that your fishing culture has a proper and prioritized place in Canada’s modern fishing economy.