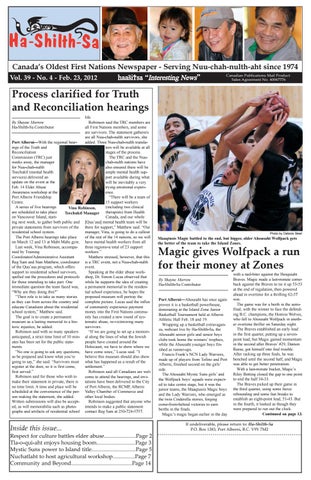 Process clarified for Truth and Reconciliation hearings life. Robinson said the TRC members are all First Nations members, and some are survivors. The statement gatherers are all Nuu-chah-nulth survivors, she Port Alberni—With the regional hearadded. Three Nuu-chah-nulth translaings of the Truth and tors will be available at all Reconciliation stages of the process. Commission (TRC) just The TRC and the Nuuweeks away, the manager chah-nulth nations have for Nuu-chah-nulth also ensured there will be Teechuktl (mental health ample mental health supservices) delivered an port available during what update on the event at the will be inevitably a very Feb. 14 Elder Abuse trying emotional experiAwareness workshop at the ence. Port Alberni Friendship “There will be a team of Centre. 15 support workers A series of five hearings (including two clinical Vina Robinson, are scheduled to take place therapists) from Health Teechuktl Manager on Vancouver Island, startCanada, and our whole ing next week, to gather both public and [Quu’asa] mental health team will be private statements from survivors of the there for support,” Matthew said. “Our residential school system. manager, Vina, is going to do a callout The Port Alberni hearings take place of the rest of the 14 nations, so we will on March 12 and 13 at Maht Mahs gym. have mental health workers from all Last week, Vina Robinson, accompathree regions–a total of 23 support nied by Training workers.” Coordinator/Administrative Assistant Matthew stressed, however, that this Reg Sam and Stan Matthew, coordinator is a TRC event, not a Nuu-chah-nulth of the Quu’asa program, which offers event. support to residential school survivors, Speaking at the elder abuse workspelled out the procedures and protocols shop, Dr. Simon Lucas observed that for those intending to take part. One while he supports the idea of creating immediate question the team faced was, a permanent memorial to the residen“Why are they doing this?” tial school experience, he hopes the “Their role is to take as many stories proposed museum will portray the as they can from across the country and complete picture. Lucas said the influx educate Canadians about the residential of community experience payment school system,” Matthew said. money into the First Nations commuThe goal is to create a permanent nity has created a new round of sysmuseum as a lasting memorial to a histematic abuse, re-victimizing many toric injustice, he added. survivors. Robinson said with so many speakers “If we are going to set up a memorianticipated, a strict time limit of 10 min- al along the lines of what the Jewish utes has been set for the public statepeople have created around the ments. Holocaust, we have to show where we “No one is going to ask any questions, have come since,” Lucas said. “I so be prepared and know what you’re believe this museum should also show going to say,” she said. “Survivors must what has happened as a result of the register at the door, so it is first come, settlement.” first served.” Robinson said all Canadians are welRobinson said for those who wish to come to attend the hearings, and invimake their statement in private, there is tations have been delivered to the City no time limit. A time and place will be of Port Alberni, the RCMP, Alberni scheduled at the convenience of the per- Valley Chamber of Commerce and son making the statement, she added. other local bodies. Written submissions will also be acceptRobinson suggested that anyone who ed, as will memorabilia such as photointends to make a public statement graphs and artifacts of residential school contact Reg Sam at 250-724-5757. By Shayne Morrow Ha-Shilth-Sa Contributor

Maaqtusis Magic battled to the end, but bigger, older Ahousaht Wolfpack gets the better of the team to take the Island Zones.

Magic gives Wolfpack a run for their money at Zones By Shayne Morrow Ha-Shilth-Sa Contributor Port Alberni—Ahousaht has once again proven it is a basketball powerhouse, dominating at the Island Zone Junior Basketball Tournament held at Alberni Athletic Hall Feb. 18 and 19. Wrapping up a basketball extravaganza, webcast live by Ha-Shilth-Sa, the Ahousaht senior girls and senior boys clubs took home the winners’ trophies, while the Ahousaht younger boys finished as runner-ups. Francis Frank’s NCN Lady Warriors, made up of players from Tofino and Port Alberni, finished second on the girls’ side. The Ahousaht Mystic Suns girls’ and the Wolfpack boys’ squads were expected to take centre stage, but it was the junior teams, the Maaqtusiis Magic boys and the Lady Warriors, who emerged as the twin Cinderella stories, forging come-from-behind victories to earn berths in the finals. Magic’s magic began earlier in the day

with a nail-biter against the Hesquiaht Braves. Magic made a last-minute comeback against the Braves to tie it up 53-53 at the end of regulation, then powered ahead in overtime for a thrilling 62-57 win. The game was for a berth in the semifinal, with the winner to face the defending B.C. champions, the Homiss Wolves, who fell to Ahousaht Wolfpack in another overtime thriller on Saturday night. The Braves established an early lead in the first quarter, putting up a sevenpoint lead, but Magic gained momentum in the second after Braves’ #29, Damon Reese, got himself into foul trouble. After racking up three fouls, he was benched until the second half, and Magic was able to get better penetration. With a last-minute bucket, Magic’s Riley Botting closed the gap to one point to end the half 34-33. The Braves picked up their game in the third quarter, using some fierce rebounding and some fast breaks to establish an eight-point lead, 51-43. But in the fourth, it looked as though they were prepared to run out the clock. Continued on page 13.