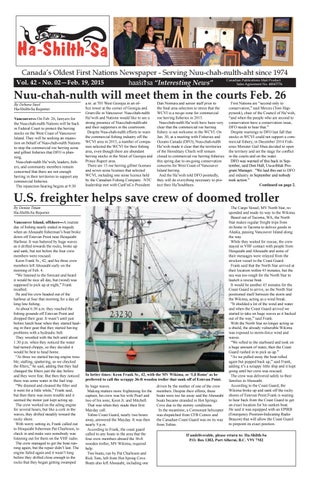 Nuu-chah-nulth will meet them in the courts Feb. 26 By Debora Steel Ha-Shilth-Sa Reporter

Vancouver— On Feb. 26, lawyers for the Nuu-chah-nulth Nations will be back in Federal Court to protect the herring stocks on the West Coast of Vancouver Island. They will be seeking an injunction on behalf of Nuu-chah-nulth Nations to stop the commercial roe herring seine and gillnet fisheries that DFO is planning. Nuu-chah-nulth Ha’wiih, leaders, fishers, and community members remain concerned that there are not enough herring in their territories to support any commercial fisheries. The injunction hearing begins at 9:30

a.m. at 701 West Georgia in an office tower at the corner of Georgia and Granville in Vancouver. Nuu-chah-nulth Ha’wiih and Nations would like to see a strong presence of Nuu-chah-nulth-aht and their supporters in the courtroom. Despite Nuu-chah-nulth efforts to warn the commercial fishing industry off the WCVI area in 2015, a number of companies selected the WCVI for their fishing area, even though there are abundant herring stocks in the Strait of Georgia and Prince Rupert area. There are 15 roe herring gillnet licenses and seven seine licenses that selected WCVI, including one seine licence held by the Canadian Fishing Company. NTC leadership met with CanFisCo President

First Nations are “second only to conservation,” said Mexsis (Tom Happynook), chair of the Council of Ha’wiih, “and when the people who are second to conservation have a conservation issue, DFO needs to hear that.” Despite warnings to DFO last fall that stocks in WCVI could not support a commercial fishery, in December 2014 Fisheries Minister Gail Shea decided to open the territory and set the stage for conflict in the courts and on the water. DFO was warned of this back in September, said Don Hall, Uu-a-thluk Program Manager. “We laid this out to DFO and industry in September and nobody took action.” Continued on page 2.

Vancouver Island, offshore—A routine day of fishing nearly ended in tragedy when an Ahousaht fisherman’s boat broke down off Estevan Point near Hesquiaht Harbour. It was battered by huge waves as it drifted towards the rocks, broke up and sank, but not before the four crew members were rescued. Keon Frank Sr., 42, and his three crew members left Ahousaht early on the morning of Feb. 4. “We listened to the forecast and heard it would be nice all day, but (wind) was supposed to pick up at night,” Frank recalled. He and his crew headed out of the harbour at four that morning for a day of long line fishing. At about 6:30 a.m. they reached the fishing grounds off Estevan Point and dropped their gear. It wasn’t until just before lunch hour when they started hauling in their gear that they started having problems with a hydraulic belt. They wrestled with the belt until about 1:30 p.m. when they noticed the water had turned choppy, so they decided it would be best to head home. “At three we started having engine trouble; stalling, sputtering, so we checked the filters,” he said, adding that they had changed the filters just the day before and they were fine. But then they noticed there was some water in the fuel trap. “We drained and cleaned the filter and it went for a little while,” Frank said, but then there was more trouble and it seemed the motor just kept acting up. The crew worked on the ailing engine for several hours, but like a cork in the waves, they drifted steadily toward the rocky shore. With worry setting in, Frank called out to Hesquiaht fisherman Pat Charleson, to check in and make sure somebody was listening out for them on the VHF radio. The crew managed to get the boat running again, but the repair didn’t last. The engine failed again and it wasn’t long before they drifted close enough to the rocks that they began getting swamped

In better times: Keon Frank Sr., 42, with the MV Wikima, or ‘Lil Rome’ as he preferred to call the scrappy 36-ft wooden troller that sunk off of Estevan Point. by huge waves. Making matters more frightening for the captain, his crew was his wife Pearl and two of his sons; Keon Jr. and Mitchell. That was when they made their first Mayday call. Tofino Coast Guard, nearly two hours away, answered the Mayday. It was then nearly 9 p.m. According to Frank, the coast guard called to any boats in the area that the four crew members aboard the 36-ft wooden troller, MV Wikima, required help. Two boats, run by Pat Charleson and Rick Tom, left from Hot Spring Cove. Boats also left Ahousaht, including one

driven by the mother of one of the crew members. Despite their efforts, these boats were too far away and the Ahousaht boats became stranded in Hot Springs Cove due to the stormy conditions. In the meantime, a Cormorant helicopter was dispatched from CFB Comox and the Canadian Coast Guard was on its way from Tofino.

The Cargo Vessel, MV North Star, responded and made its way to the Wikima. Based out of Tacoma, WA, the North Star makes regular freight trips from its home in Tacoma to deliver goods in Alaska, passing Vancouver Island along the way. While they waited for rescue, the crew stayed in VHF contact with people from Hesquiaht and Ahousaht and some of their messages were relayed from the stricken vessel to the Coast Guard. Frank said that the North Star arrived at their location within 45 minutes, but the sea was too rough for the North Star to launch a rescue boat. It would be another 45 minutes for the Coast Guard to arrive, so the North Star positioned itself between the storm and the Wikima, acting as a wind break. “It shielded a lot of the wind and water and when the Coast Guard arrived we started to take on huge waves as it backed out of the way,” said Frank. With the North Star no longer acting as a shield, the already vulnerable Wikima was exposed to storm-force wind and waves. “We rolled to the starboard and took on a huge amount of water, then the Coast Guard rushed in to pick us up.” “As we pulled away the boat rolled again but popped back up,” said Frank, adding it’s a scrappy little ship and it kept going until her crew was rescued. The crew was delivered safely to their families in Ahousaht. According to the Coast Guard, the Wikima broke up and sank off the rocky shores of Estevan Point.Frank is waiting to hear back from the Coast Guard to get an exact location for his sunken boat. He said it was equipped with an EPIRB (Emergency Position-Indicating Radio Beacon) that will allow the Coast Guard to pinpoint its exact position.