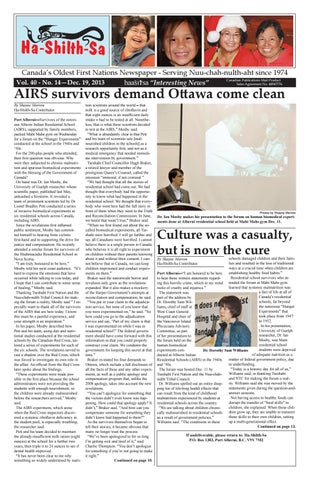 AIRS survivors demand Ottawa come clean By Shayne Morrow Ha-Shilth-Sa Contributor Port Alberni—Survivors of the notorious Alberni Indian Residential School (AIRS), supported by family members, packed Maht Mahs gym on Wednesday for a forum on the “Hunger Experiments” conducted at the school in the 1940s and ‘50s. For the 200-plus people who attended, their first question was obvious: Why were they subjected to chronic malnutrition and spurious biomedical experiments with the blessing of the Government of Canada? On hand was Dr. Ian Mosby, the University of Guelph researcher whose scientific paper, published last May, unleashed a firestorm. It revealed a team of prominent scientists led by Dr. Lionel Bradley Pett conducted a series of invasive biomedical experiments at six residential schools across Canada, including AIRS. Since the revelations first inflamed public sentiment, Mosby has committed himself to hearing from victims first-hand and to supporting the drive for justice and compensation. He recently attended a similar forum for survivors of the Shubenacadie Residential School in Nova Scotia. “I am truly honoured to be here,” Mosby told his west coast audience. “It’s hard to express the emotions that have occurred while talking to you today, and I hope that I can contribute to some sense of healing,” Mosby said. Thanking Tseshaht First Nation and the Nuu-chah-nulth Tribal Council for making the forum a reality, Mosby said “ I especially want to thank all of the survivors of the AIRS that are here today. I know this must be a painful experience, and your strength is an inspiration.” In his paper, Mosby described how Pett and his team, using diet and nutritional studies conducted at the residential schools by the Canadian Red Cross, tailored a series of experiments for each of the six schools. The revelations served to cast a shadow over the Red Cross, which was forced to investigate its own role in the affair. An official from the Red Cross later spoke about the findings. “These experiments were made possible in the first place because the school administrators were not providing the students with enough nourishment, so the children were already malnourished before the researchers arrived,” Mosby said. The AIRS experiment, which arose when the Red Cross inspectors discovered a systemic riboflavin deficiency in the student pool, is especially troubling, the researcher said. Pett and his team decided to maintain the already-insufficient milk ration (eight ounces) at the school for a further two years, then triple it to 24 ounces to see if dental health improved. “It has never been clear to me why something so widely understood by nutri-

tion scientists around the world – that milk is a good source of riboflavin and that eight ounces is an insufficient daily intake – had to be tested at all. Nonetheless, that is what these scientists decided to test at the AIRS,” Mosby said. “What is abundantly clear is that Pett and his team of scientists saw [malnourished children in the schools] as a research opportunity first, and not as a medical emergency that needed immediate intervention by government.” Tseshaht Chief Councillor Hugh Braker, a retired lawyer and member of the prestigious Queen’s Counsel, called the omission “immoral, if not criminal.” “We had thought that all the stories of residential school had come out. We had thought that everybody had the opportunity to know what had happened in the residential school. We thought that everybody who went here had the full story in front of them when they went to the Truth and Reconciliation Commission. In June, we heard that wasn’t true,” Braker said. “When we first found out about the socalled biomedical experiments, all Tseshaht were horrified. I will go further and say all Canadians were horrified. I cannot believe there is a single person in Canada who believes it is all right to experiment on children without their parents knowing about it and without their consent. I cannot believe that in Canada, we can keep children imprisoned and conduct experiments on them.” Braker said the nationwide horror and revulsion only grew as the revelations expanded. But it also makes a mockery of the Harper Government’s attempts at reconciliation and compensation, he said. “You put in your claim to the adjudication service, but none of you knew that you were experimented on,” he said. “So how could you go to the adjudication service and say, ‘Part of my claim is that I was experimented on while I was in residential school?’ The federal government should have come forward with this information so that you could properly construct your claim. We condemn the government for keeping this secret at that time.” Braker re-stated his four demands to Ottawa, which include a full disclosure of all the facts of these and any other experiments, as well as a public apology and compensation program that, unlike the 2008 apology, takes into account the new revelations. “You can’t apologize for something that the victims didn’t even know was happening. How could that apology apply? It didn’t,” Braker said. “And how can you compensate someone for something they didn’t know had happened to them?” As the survivors themselves began to tell their stories, it became obvious that many no longer trust the process. “We’ve been apologized to for so long I’m getting sick and tired of it,” said Charlie Thompson. “You don’t apologize for something if you’re not going to make it right.” Continued on page 10.

Culture was a casualty, but is now the cure

schools damaged children and their families and resulted in the loss of traditional ways at a crucial time when children are establishing healthy food habits.” Port Alberni—“I am honored to be here Residential school survivors who atto hear these witness statements regarding this horrific crime, which in my mind tended the forum at Maht Mahs gym learned that systemic malnutrition was reeks of cruelty and injustice.” a fact of life at all of The statement was Canada’s residential part of the address by schools, far beyond Dr. Dorothy Sam Wilthe notorious “Hunger liams, chief of staff at Experiments” that West Coast General took place from 1947 Hospital and chair of to 1952. the Vancouver Island In his presentation, Physicians Advisory University of Guelph Committee, as part researcher, Dr. Ian of her presentation to Mosby, was blunt: the forum held on the residential school human biomedical students were deprived experiments conDr. Dorothy Sam Williams of adequate nutrition as a ducted at Alberni Indian matter of federal government policy, due Residential Schools (AIRS) in the 1940s to underfunding. and ‘50s. “Today is a historic day for all of us,” The forum was hosted Dec. 11 by Williams said, in thanking Tseshaht Tseshaht First Nation and the Nuu-chahand NTC for making the forum a realnulth Tribal Council. ity. Williams said she was moved by the Dr. Williams spelled out an entire shopstatements given during the question-andping list of life-long health effects that answer sessions. can result from the kind of childhood Not having access to healthy foods can malnutrition experienced by students at disrupt the transfer of “food skills” to residential schools across the country. children, she explained. When those chil“We are talking about children chronidren grow up, they are unable to transmit cally malnourished in residential schools those skills to their own children, setting as a result of government policies,” up a multi-generational effect. Williams said. “The conditions in these Continued on page 13. By Shayne Morrow Ha-Shilth-Sa Contributor