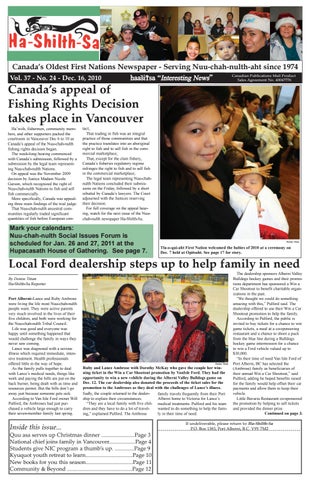 Canada’s appeal of Fishing Rights Decision takes place in Vancouver Ha’wiih, fishermen, community members, and other supporters packed the courtroom in Vancouver Dec 6 to 10 as Canada’s appeal of the Nuu-chah-nulth fishing rights decision began. The week-long hearing commenced with Canada’s submission, followed by a submission by the legal team representing Nuu-chah-nulth Nations. On appeal was the November 2009 decision by Justice Madam Nicole Garson, which recognized the right of Nuu-chah-nulth Nations to fish and sell fish commercially. More specifically, Canada was appealing three main findings of the trial judge: That Nuu-chah-nulth ancestral communities regularly traded significant quantities of fish before European con-

Mark your calendars: Nuu-chah-nulth Social Issues Forum is scheduled for Jan. 26 and 27, 2011 at the Hupacasath House of Gathering. See page 7.

Tla-o-qui-aht First Nation welcomed the babies of 2010 at a ceremony on Dec. 7 held at Opitsaht. See page 17 for story.

Local Ford dealership steps up to help family in need By Denise Titian Ha-Shilth-Sa Reporter Port Alberni–Lance and Ruby Ambrose were living the life most Nuu-chah-nulth people want. They were active parents very much involved in the lives of their five children, and both were working for the Nuu-chah-nulth Tribal Council. Life was good and everyone was happy until something happened that would challenge the family in ways they never saw coming. Lance was diagnosed with a serious illness which required immediate, intensive treatment. Health professionals offered little in the way of hope. As the family pulls together to deal with Lance’s medical needs, things like work and paying the bills are put on the back burner, being dealt with as time and resources permit. But the bills don’t go away just because someone gets sick. According to Van Isle Ford owner Will Pulford, the Ambroses had just purchased a vehicle large enough to carry their seven-member family last spring.

Ruby and Lance Ambrose with Dorothy McKay who gave the couple her winning ticket in the Win a Car Shootout promotion by VanIsle Ford. They had the opportunity to win a new vehilcle during the Alberni Valley Bulldogs game on Dec. 12. The car dealership also donated the proceeds of the ticket sales for the promotion to the Ambroses as they deal with the challenges of Lance’s illness. Sadly, the couple returned to the dealerfamily travels frequently from their Port ship to explain their circumstances. Alberni home to Victoria for Lance’s “They are a local family with five chil- medical treatments. Pulford and his team dren and they have to do a lot of travelwanted to do something to help the famiing,” explained Pulford. The Ambrose ly in their time of need.

The dealership sponsors Alberni Valley Bulldogs hockey games and their promotions department has sponsored a Win a Car Shootout to benefit charitable organizations in the past. “We thought we could do something amazing with this,” Pulford said. The dealership offered to use their Win a Car Shootout promotion to help the family. According to Pulford, the public is invited to buy tickets for a chance to win game tickets, a meal at a co-sponsoring restaurant and a chance to shoot a puck from the blue line during a Bulldogs hockey game intermission for a chance to win a Ford vehicle valued up to $30,000. “In their time of need Van Isle Ford of Port Alberni, BC has selected the (Ambrose) family as beneficiaries of their annual Win a Car Shootout,” said Pulford, adding he hoped benefits raised for the family would help offset their car payments and allow them to keep their vehicle. Little Bavaria Restaurant co-sponsored the promotion by helping to sell tickets and provided the dinner prize. Continued on page 3.