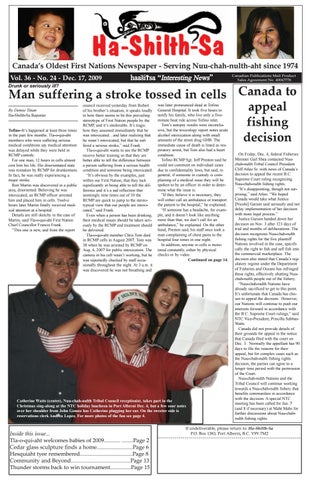 Tofino–It’s happened at least three times in the past few months. Tla-o-qui-aht members who were suffering serious medical conditions say medical attention was delayed while they were held in RCMP custody. For one man, 12 hours in cells almost cost him his life. His disorientated state was mistaken by RCMP for drunkenness. In fact, he was really experiencing a major stroke. Ron Martin was discovered in a public area, disoriented. Believing he was intoxicated, an RCMP officer arrested him and placed him in cells. Twelve hours later Martin finally received medical attention at a hospital. Details are still sketchy in the case of Martin, said Tla-o-qui-aht First Nation Chief Councillor Francis Frank. “This one is new, and from the report

council received yesterday from Robert of his brother’s situation, it speaks loudly to how there seems to be this prevailing stereotype of First Nation people by the RCMP, and it’s intolerable. It’s tragic how they assumed immediately that he was intoxicated…and later realizing that he wasn’t intoxicated, but that he suffered a serious stroke,” said Frank. Tla-o-qui-aht wants to see the RCMP receive better training so that they are better able to tell the difference between a person suffering from a serious health condition and someone being intoxicated. “It’s obvious by the examples, just within our First Nation, that they lack significantly in being able to tell the difference and it’s a sad reflection that seemingly nine times out of 10 the RCMP are quick to jump to the stereotypical view that our people are intoxicated,” said Frank. Even when a person has been drinking, their medical issues should be taken seriously by the RCMP and treatment should be delivered. Tla-o-qui-aht member Chris Tom died in RCMP cells in August 2007. Tom was 38 when he was arrested by RCMP on Aug. 4, 2007 for public intoxication. The camera in his cell wasn’t working, but he was reportedly checked by staff occasionally throughout the night. At 3 a.m. it was discovered he was not breathing and

was later pronounced dead at Tofino General Hospital. It took five hours to notify his family, who live only a fiveminute boat ride across Tofino inlet. Tom’s autopsy results were inconclusive, but the toxicology report notes acute alcohol intoxication along with small amounts of the street drug GHB. The immediate cause of death is listed as respiratory arrest, but Tom also had a heart condition. Tofino RCMP Sgt. Jeff Preston said he could not comment on individual cases due to confidentiality laws, but said, in general, if someone in custody is complaining of a medical issue they will be spoken to by an officer in order to determine what the issue is. “If they believe it is necessary, they will either call an ambulance or transport the patient to the hospital,” he explained. “If someone has a headache, for example, and it doesn’t look like anything more than that, we don’t call for an ambulance,” he explained. On the other hand, Preston said, his staff once took a man complaining of chest pains to the hospital four times in one night. In addition, anyone in cells is monitored constantly, either by physical checks or by video. Continued on page 14.

Catherine Watts (centre), Nuu-chah-nulth Tribal Council receptionist, takes part in the Christmas sing-along at the NTC holiday luncheon in Port Alberni Dec. 4, but a few sour notes over her shoulder from John Gomez has Catherine plugging her ear. On the sweeter side is reservations clerk Andrea Lopez. For more photos of the fun see page 4.

On Friday, Dec. 4, federal Fisheries Minister Gail Shea contacted Nuuchah-nulth Tribal Council President Cliff Atleo Sr. with news of Canada’s decision to appeal the recent B.C. Supreme Court ruling recognizing Nuu-chah-nulth fishing rights. “It’s disappointing, though not surprising,” said Atleo. “We hoped Canada would take what Justice [Nicole] Garson said seriously and not delay implementation of her decision with more legal process.” Justice Garson handed down her decision on Nov. 3 after 123 days of trial and months of deliberations. The decision recognizes Nuu-chah-nulth fishing rights for the five plaintiff Nations involved in the case, specifically the right to fish and sell fish into the commercial marketplace. The decision also stated that Canada’s regulatory regime under the Department of Fisheries and Oceans has infringed these rights, effectively shutting Nuuchah-nulth people out of the fishery. “Nuu-chah-nulth Nations have already sacrificed to get to this point. It’s unfortunate that Canada has chosen to appeal the decision. However, our Nations will continue to push our interests forward in accordance with the B.C. Supreme Court rulings,” said NTC Vice-President, Priscilla SabbasWatts. Canada did not provide details of their grounds for appeal in the notice that Canada filed with the court on Dec. 3. Normally the appellant has 90 days to file the reasons for their appeal, but for complex cases such as the Nuu-chah-nulth fishing rights decision, the parties can agree to a longer time period with the permission of the Court. Nuu-chah-nulth Nations and the Tribal Council will continue working towards a Nuu-chah-nulth fishery that benefits communities in accordance with the decision. A special NTC meeting has been called for Jan. 7 (and 8 if necessary) at Maht Mahs for further discussions about Nuu-chahnulth fishing rights.