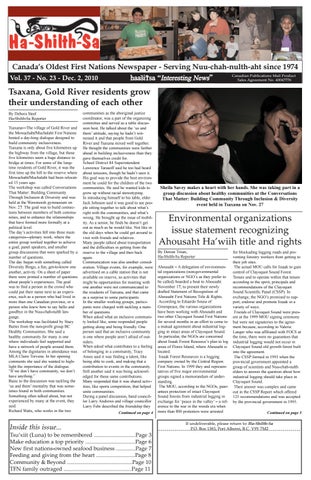 Tsaxana, Gold River residents grow their understanding of each other By Debora Steel Ha-Shilth-Sa Reporter Tsaxana—The village of Gold River and the Mowachaht/Muchalaht First Nations hosted a day-long dialogue designed to build community inclusiveness. Tsaxana is only about five kilometres up the highway from the village, but those five kilometres seem a huge distance to bridge at times. For some of the longtime residents of Gold River, it was the first time up the hill to the reserve where Mowachaht/Muchalaht had been relocated 15 years ago. The workshop was called Conversations That Matter: Building Community Through Inclusion &amp; Diversity and was held at the Wawmeesh gymnasium on Nov. 27. The goal was to build connections between members of both communities, and to enhance the relationships that have formed more formally at a political level. The day’s activities fell into three main categories—plenary work, where the entire group worked together to achieve a goal; panel speakers; and smaller group discussions that were sparked by a number of questions. The day began with something called Diversity Bingo, a fun, get-to-know one another, activity. On a sheet of paper there were printed a number of questions about people’s experiences. The goal was to find a person in the crowd who could put their name next to an experience, such as a person who had lived in more than one Canadian province, or a person who knew how to say hello and goodbye in the Nuu-chah-nulth language. The workshop was facilitated by Stacy Barter from the non-profit group BC Healthy Communities. She said a healthy community for many is one where individuals feel supported and have a network of people around them. Among the dignitaries in attendance was MLA Claire Trevena. In her opening comments she said she wanted to highlight the importance of the dialogue. “If we don’t have community, we don’t have anything.” Basic to the discussion was tackling the ‘us and them’ mentality that was sometimes found in both communities. Something often talked about, but not experienced by many at the event, they said. Richard Watts, who works in the two

communities as the aboriginal justice coordinator, was a part of the organizing committee and served as a table discussion host. He talked about the ‘us and them’ attitude, saying he hadn’t witnessed it and that people from Gold River and Tsaxana mixed well together. He thought the communities were farther ahead in building inclusiveness than they gave themselves credit for. School District 84 Superintendent Lawrence Tarasoff said he too had heard about tensions, though he hadn’t seen it. His goal was to provide the best environment he could for the children of the two communities. He said he wanted kids to grow up without racial stereotyping. In introducing himself to his table, elder Jack Johnson said it was good to see people sitting together to talk about what’s right with the communities, and what’s wrong. He brought up the issue of mobility. As a senior, he finds he doesn’t get out as much as he would like. Not like in the old days when he could get around to visit with friends and relatives. Many people talked about transportation and the difficulties in getting from the reserve to the village and then back again. Communication was also another consideration. Village events, for example, were advertised on a cable station that is not available on reserve, so activities that might be opportunities for meeting with one another were not communicated to the residents of Tsaxana, and that came as a surprise to some participants. In the smaller working groups, participants were charged with tackling a number of questions. When asked what an inclusive community looked like, some responded people getting along and being friendly. One person said that an inclusive community is one where people aren’t afraid of outsiders. When asked what contributes to a feeling of belonging in a community, Tracy Amos said it was finding a talent, like being able to cook, and making that a contribution to events in the community. Still another said it was being acknowledged for those same contributions. Many responded that it was shared activities, like sports competition, that helped unite communities. During a panel discussion, band councillor Larry Andrews and village councillor Larry Fehr described the friendship they Continued on page 4

Sheila Savey makes a heart with her hands. She was taking part in a group discussion about healthy communities at the Conversations That Matter: Building Community Through Inclusion &amp; Diversity event held in Tsaxana on Nov. 27

Environmental organizations issue statement recognizing Ahousaht Ha’wiih title and rights By Denise Titian, Ha-Shilth-Sa Reporter Ahousaht – A delegation of environmental organizations (non-governmental organizations or NGO’s as they prefer to be called) boarded a boat to Ahousaht November 17, to present their newly drafted Statement of Recognition of Ahousaht First Nations Title &amp; Rights. According to Eduardo Sousa of Greenpeace, the various organizations have been working with Ahousaht and two other Clayoquot Sound First Nations for several months in an effort to come to a mutual agreement about industrial logging in intact areas of Clayoquot Sound. In particular, the NGOs are concerned about Iisaak Forest Resource’s plan to log areas of Flores Island, where Ahousaht is located. Iisaak Forest Resources is a logging company owned by the Central Region First Nations. In 1999 they and representatives of five major environmental groups signed a memorandum of understanding. The MOU, according to the NGOs, guarantees protection of intact Clayoquot Sound forests from industrial logging in exchange for ‘peace in the valley’ – a reference to the war in the woods era when more than 800 protestors were arrested

for blockading logging roads and preventing forestry workers from getting to their job sites. The actual MOU calls for Iisaak to gain control of Clayoquot Sound Forest Tenure and to operate within that tenure according to the spirit, principals and recommendations of the Clayoquot Sound Scientific Panel (CSSP). In exchange, the NGO’s promised to support, endorse and promote Iisaak in a variety of ways. Friends of Clayoquot Sound were present at the 1999 MOU signing ceremony but were not signatories to the agreement because, according to Valerie Langer who was affiliated with FOCS at the time, there were no guarantees that industrial logging would not occur in Clayoquot Sound old growth forest built into the agreement. The CSSP formed in 1993 when the provincial government appointed a group of scientists and Nuu-chah-nulth elders to answer the question about how industrial logging should take place in Clayoquot Sound. Their answer was complex and came out in the CSSP Report which offered 125 recommendations and was accepted by the provincial government in 1995. Continued on page 5