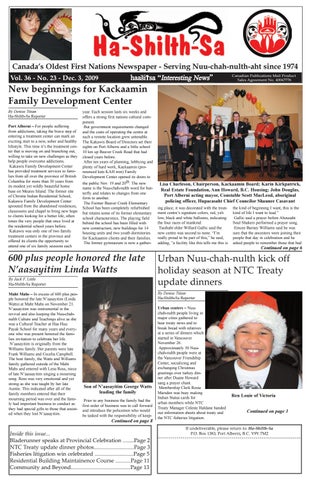 New beginnings for Kackaamin Family Development Center By Denise Titian Ha-Shilth-Sa Reporter Port Alberni – For people suffering from addictions, taking the brave step of entering a treatment center can mark an exciting start to a new, sober and healthy lifestyle. This time it’s the treatment center that is moving on and branching out, willing to take on new challenges as they help people overcome addictions. Kakawis Family Development Center has provided treatment services to families from all over the province of British Columbia for more than 30 years from its modest yet wildly beautiful home base on Meares Island. The former site of Christie Indian Residential School, Kakawis Family Development Center sprouted from the abandoned residences, classrooms and chapel to bring new hope to clients looking for a better life; often times the very people that once lived at the residential school years before. Kakawis was only one of two family treatment centers in the province and offered its clients the opportunity to attend one of six family sessions each

year. Each session lasts six weeks and offers a strong first nations cultural component. But government requirements changed and the costs of operating the centre at such a remote location grew untenable. The Kakawis Board of Directors set their sights on Port Alberni and a little school 10 km up Beaver Creek Road that had closed years before. After ten years of planning, lobbying and plenty of hard work, Kackaamin (pronounced kats KAH min) Family Development Center opened its doors to the public Nov. 19 and 20th. The new name is the Nuu-chah-nulth word for butterfly and relates to changes from one form to another. The Former Beaver Creek Elementary School has been completely refurbished but retains some of its former elementary school characteristics. The playing field behind the school has been filled with new construction; new buildings for 14 housing units and two youth dormitories for Kackaamin clients and their families. The former gymnasium is now a gather-

600 plus people honored the late N’aasayitim Linda Watts By Jack F. Little Ha-Shilth-Sa Reporter Maht Mahs – In excess of 600 plus people honored the late N’aasayitim (Linda Watts) at Maht Mahs on November 21. N’aasayitim was instrumental in the revival and also keeping the Nuu-chahnulth Culture and Teachings alive as she was a Cultural Teacher at Haa Huu Payak School for many years and everyone who was present honored the families invitation to celebrate her life. N’aasayitim is originally from the Williams family. Her parents were late Frank Williams and Cecelia Campbell. The host family, the Watts and Williams family gathered outside of the Maht Mahs and entered with Lena Ross, niece of late N’aassayitim singing a mourning song. Ross was very emotional and yet strong as she was taught by her late Auntie. This indicated after all of the family members entered that their mourning period was over and the family had important business to conduct as they had special gifts to those that assisted when they lost N’aasayitim.

the kind of beginning I want, this is the kind of life I want to lead.” Gallic said a prayer before Ahousaht Soul Shakers performed a prayer song. Emcee Barney Williams said he was sure that the ancestors were joining their people that day in celebration and he asked people to remember those that had