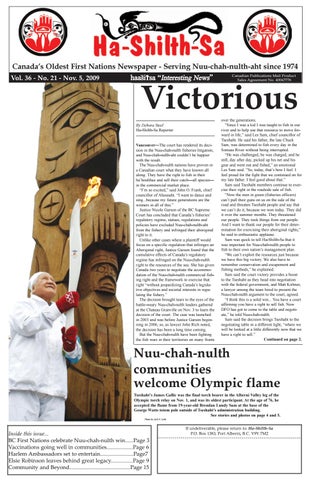 Victorious By Debora Steel Ha-Shilth-Sa Reporter Vancouver—The court has rendered its decision in the Nuu-chah-nulth fisheries litigation, and Nuu-chah-nulth-aht couldn’t be happier with the result. The Nuu-chah-nulth nations have proven in a Canadian court what they have known all along. They have the right to fish in their ha’houlthee and sell their catch—all species— in the commercial market place. “I’m so excited,” said John O. Frank, chief councillor of Ahousaht. “I want to dance and sing...because my future generations are the winners in all of this.” Justice Nicole Garson of the BC Supreme Court has concluded that Canada’s fisheries’ regulatory regime, statues, regulations and policies have excluded Nuu-chah-nulth-aht from the fishery and infringed their aboriginal right to it. Unlike other cases where a plaintiff would focus on a specific regulation that infringes an Aboriginal right, Justice Garson found that the cumulative effects of Canada’s regulatory regime has infringed on the Nuu-chah-nulth right to the resources of the sea. She has given Canada two years to negotiate the accommodation of the Nuu-chah-nulth commercial fishing right and the framework to exercise that right “without jeopardizing Canada’s legislative objectives and societal interests in regulating the fishery.” The decision brought tears to the eyes of the battle-weary Nuu-chah-nulth leaders gathered at the Chateau Granville on Nov. 3 to learn the decision of the court. The case was launched in 2003 and was before Justice Garson beginning in 2006, so, as lawyer John Rich noted, the decision has been a long time coming. But the Nuu-chah-nulth have been fighting the fish wars in their territories on many fronts

over the generations. “Since I was a kid I was taught to fish in our river and to help use that resource to move forward in life,” said Les Sam, chief councillor of Tseshaht. He said his father, the late Chuck Sam, was determined to fish every day in the Somass River without being interrupted. “He was challenged, he was charged, and he still, day after day, picked up his net and his gear and went out and fished,” an emotional Les Sam said. “So, today, that’s how I feel. I feel proud for the fight that we continued on for my late father. I feel good about that.” Sam said Tseshaht members continue to exercise their right in the roadside sale of fish. “Now the men in green (fisheries officers) can’t pull their guns on us on the side of the road and threaten Tseshaht people and say that we can’t do it, because we won today. They did it over the summer months. They threatened our people. They took things from our people. And I want to thank our people for their determination for exercising their aboriginal rights,” he said to enthusiastic applause. Sam was quick to tell Ha-Shilth-Sa that it was important for Nuu-chah-nulth people to fish to their own nation’s management plan. “We can’t exploit the resources just because we have this big victory. We also have to remember conservation and escapement and fishing methods,” he explained. Sam said the court victory provides a boost to the Tseshaht as they head into negotiation with the federal government, and Matt Kirhner, a lawyer among the team hired to present the Nuu-chah-nulth argument to the court, agreed. “I think this is a solid win... You have a court affirming you have a right to sell fish. Now DFO has got to come to the table and negotiate,” he told Nuu-chah-nulth. Sam said the decision brings Tseshaht to the negotiating table in a different light, “where we will be looked at a little differently now that we have a right to sell.” Continued on page 2.

Nuu-chah-nulth communities welcome Olympic flame Tseshaht’s James Gallic was the final torch bearer in the Alberni Valley leg of the Olympic torch relay on Nov. 1, and was its oldest participant. At the age of 76, he accepted the flame from 19-year-old Brendan Lundy Sam at the base of the George Watts totem pole outside of Tseshaht’s administration building. See stories and photos on page 4 and 5. Photo by Jack F. Little