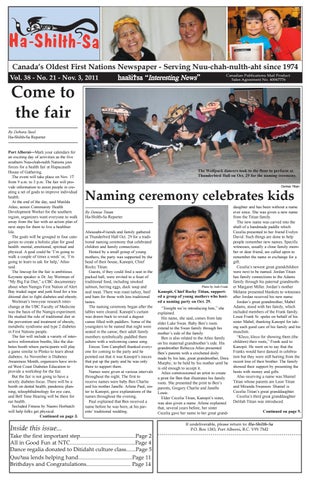 Come to the fair By Debora Steel Ha-Shilth-Sa Reporter Port Alberni—Mark your calendars for an exciting day of activities as the five southern Nuu-chah-nulth Nations join forces for a health fair at Hupacasath House of Gathering. The event will take place on Nov. 17 from 9 a.m. to 3 p.m. The fair will provide information to assist people in creating a set of goals to improve individual health. At the end of the day, said Matilda Atleo, senior Community Health Development Worker for the southern region, organizers want everyone to walk away from the fair with an action plan of next steps for them to live a healthier life. The goals will be grouped in four categories to create a holistic plan for good health: mental, emotional, spiritual and physical. A goal could be ‘I’m going to walk a couple of times a week’ or, ‘I’m going to learn to ask for help,’ Atleo said. The line-up for the fair is ambitious. Keynote speaker is Dr. Jay Wortman of “My Big Fat Diet,” a CBC documentary about when Namgis First Nation of Alert Bay traded sugar and junk food for a traditional diet to fight diabetes and obesity. Wortman’s two-year research interchange at the UBC Faculty of Medicine was the basis of the Namgis experiment. He studied the role of traditional diet in the prevention and treatment of obesity, metabolic syndrome and type 2 diabetes in First Nations people. The fair will include a variety of interactive information booths, like the diabetes booth where participants will play a game similar to Plinko to learn about diabetes. As November is Diabetes Awareness Month, organizers have invited West Coast Diabetes Education to provide a workshop for the fair. But the fair is not going to have a strictly diabetes focus. There will be a booth on dental health, pandemic planning, teleophthalmology for eye care, and Bell Tone Hearing will be there for ear health. Secluded Fitness by Naomi Horbatch will help folks get physical. Continued on page 3.

The Wolfpack dancers took to the floor to perform at Thunderbird Hall on Oct. 29 for the naming ceremony. Denise Titian

Naming ceremony celebrates kids By Denise Titian Ha-Shilth-Sa Reporter Ahousaht–Friends and family gathered at Thunderbird Hall Oct. 29 for a traditional naming ceremony that celebrated children and family connections. Hosted by a small group of young mothers, the party was supported by the head of their house, Kanopit, Chief Rocky Titian. Guests, if they could find a seat in the packed hall, were invited to a feast of traditional food, including smoked salmon, herring eggs, duck soup and seal meat. There was roast turkey, beef and ham for those with less traditional tastes. The naming ceremony began after the tables were cleared. Kanopit’s curtain was drawn back to reveal a dugout canoe filled with paddlers. Some of the youngsters to be named that night were seated in the canoe; their adult family members symbolically paddled them ashore with a welcoming canoe song. Emcee Tom Campbell thanked everyone for coming to the party and he pointed out that it was Kanopit’s nieces that put up the party and he was only there to support them. Names were given at various intervals throughout the night. The first to receive names were baby Ben Charlie and his mother Janelle. Arlene Paul, sister to Kanopit, gave explanations of the names throughout the evening. Paul explained that Ben received a name before he was born, at his parents’ traditional wedding.

Kanopit, Chief Rocky Titian, supported a group of young mothers who hosted a naming party on Oct. 29. “Tonight we’re introducing him,” she explained. His name, she said, comes from late elder Luke Swan. Baby Ben’s roots extend to the Swan family through his mother’s side of the family. Ben is also related to the Atleo family on his maternal grandmother’s side. His grandmother Rebecca Atleo presented Ben’s parents with a crocheted doily made by his late, great grandmother, Dora Murphy; to be held by his mother until he is old enough to accept it. Atleo commissioned an artist to create a print for Ben that illustrates his family roots. She presented the print to Ben’s parents, Gregory Charlie and Janelle Louie. Elder Cecelia Titian, Kanopit’s sister, was also given a name. Arlene explained that, several years before, her sister Cecelia gave her name to her great grand-

daughter and has been without a name ever since. She was given a new name from the Titian family. The new name was carved into the shaft of a handmade paddle which Cecelia presented to her friend Evelyn David. Such things are done to help people remember new names. Specific witnesses, usually a close family member or dear friend, are called upon to remember the name in exchange for a gift. Cecelia’s newest great grandchildren were next to be named. Jordan Titian has family connections to the Adams family through his paternal grandmother Margaret Miller. Jordan’s mother Melanie presented blankets to witnesses after Jordan received his new name. Jordan’s great grandmother, Mabel Adams, stood with her family, which included members of the Frank family. Louie Frank Sr. spoke on behalf of his sister Mabel, thanking Kanopit for taking such good care of his family and his muschim. “Kleco, kleco for showing them (the children) their roots,” Frank said to Kanopit. He went on to say that the Franks would have danced in celebration but they were still hurting from the recent loss of their brother. The family showed their support by presenting the hosts with money and gifts. Also receiving a name was Shaniel Titian whose parents are Leon Titian and Miranda Swanson. Shaniel is Cecelia Titian’s great granddaughter. Cecelia’s third great granddaughter Delilah Titian was introduced. Continued on page 9.