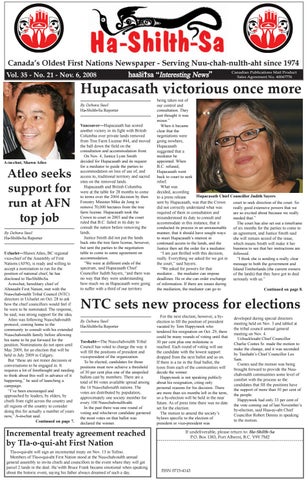 Atleo seeks support for run at AFN top job By Debora Steel Ha-Shilth-Sa Reporter Ucluelet—Shawn Atleo, BC regional vice-chief of the Assembly of First Nations (AFN), is ready and willing to accept a nomination to run for the position of national chief, he has disclosed to Ha-Shilth-Sa. A-in-chut, hereditary chief of Ahousaht First Nation, met with the Nuu-chah-nulth Tribal Council (NTC) directors in Ucluelet on Oct. 28 to ask how the chief councillors would feel if he were to be nominated. The response, he said, was strong support for the idea. Atleo was following Nuu-chah-nulth protocol, coming home to the community to consult with his extended Nuu-chah-nulth family before allowing his name to be put forward for the position. Nominations do not open until May 2009, for an election that will be held in July 2009 in Calgary. But “these are not minor decisions or conversations to be engaged in. It requires a lot of forethought and needing to think about this well in advance of it happening,” he said of launching a campaign. “I’ve been encouraged and approached by leaders, by elders, by chiefs from right across the country and all regions of the country to consider doing this for actually a number of years now,” A-in-chut said. Continued on page 7.

Vancouver—Hupacasath has scored another victory in its fight with British Columbia over private lands removed from Tree Farm License #44, and moved the ball down the field on the consultation and accommodation front. On Nov. 4, Justice Lynn Smith decided for Hupacasath and its request for a mediator to guide the parties to accommodation on loss of use of, and access to, traditional territory and sacred sites on the removed lands. Hupacasath and British Columbia were at the table for 28 months to come to terms over the 2004 decision by then Forestry Minister Mike de Jong to remove 70,000 hectares from the tree farm license. Hupacasath took the Crown to court in 2005 and the court ruled that B.C. failed in its duty to consult the nation before removing the lands. Justice Smith did not put the lands back into the tree farm license, however, but sent the parties to the negotiation table to come to some agreement on accommodation. “We were at different ends of the spectrum, said Hupacasath Chief Councillor Judith Sayers, “and there was no way that they were understanding how much we as Hupacasath were going to suffer with a third of our territory

being taken out of our control and consultation. They just thought it was minor.” When it became clear that the negotiations were going nowhere, Hupacasath suggested that a mediator be appointed. When B.C. refused, Hupacasath went back to court to seek relief. What was decided, according Hupacasath Chief Councillor Judith Sayers to a press release sent by Hupacasath, was that the Crown court to seek direction of the court. So did not correctly understand what was really good extensive powers that we required of them in consultation and are so excited about because we really misunderstood its duty to consult and needed that.” accommodate in this instance, that it The court has also set out a timeframe conducted its process in an unreasonable of six months for the parties to come to manner, that it should have sought ways an agreement, and Justice Smith said to meet Hupacasath’s interest in she will remain seized of the issue, continued access to the lands, and the which means Smith will make it her Justice then set the order for a mediator. business to see that her instructions are “I am just thrilled with this decision, followed. really. Everything we asked for we got in “I think she is sending a really clear the court,” said Sayers. message to both the government and “We asked for powers for that Island Timberlands (the current owners mediator… the mediator can impose of the lands) that they have got to deal deadlines. He or she can order exchange seriously with us.” of information. If there are issues during the mediation, the mediator can go to Continued on page 8.

NTC sets new process for elections By Debora Steel Ha-Shilth-Sa Reporter Tseshaht—The Nuu-chah-nulth Tribal Council has voted to change the way it will fill the positions of president and vice-president of the organization. To be elected, candidates for those positions must now achieve a threshold of 50 per cent plus one of the unspoiled ballots cast by members. There are a total of 84 votes available spread among the 14 Nuu-chah-nulth nations. The votes are distributed by population, approximately one society member for every 100 Nuu-chah-nulth-aht. In the past there was one round of voting and whichever candidate garnered the most votes on that ballot was declared the winner.

For the next election, however, a byelection to fill the position of president vacated by Tom Happynook who tendered his resignation on Oct. 29, there could be many rounds of voting until that 50 per cent plus one milestone is reached. Each round of voting will see the candidate with the lowest support dropped from the next ballot and so on. If there is a tie in the final ballot, the tyees from each of the communities will decide the winner. Happynook is not speaking publicly about his resignation, citing only personal reasons for his decision. There are more than six months left in the term, so a by-election will be held in the near future. As of press time there was no date set for the election. The motion to amend the society’s bylaws specific to the election of president or vice-president was

developed during special directors meeting held on Nov. 3 and tabled at the tribal council annual general meeting on Nov. 4. Uchucklesaht Chief Councillor Charlie Cootes Sr. made the motion to make the change, and it was seconded by Tseshaht’s Chief Councillor Les Sam. Cootes said the motion was being brought forward to provide the Nuuchah-nulth communities some level of comfort with the process so the candidates that fill the positions have the support of more than 50 per cent of the people. Happynook had only 33 per cent of the vote coming out of last November’s by-election, said Huu-ay-aht Chief Councillor Robert Dennis in speaking to the motion.