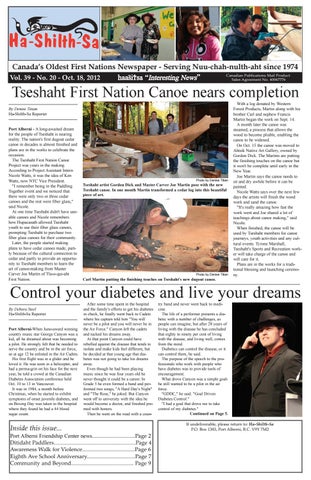 Port Alberni - A long-awaited dream for the people of Tseshaht is nearing reality. The nation&#39;s first dugout cedar canoe in decades is almost finished and plans are in the works to celebrate the occasion. The Tseshaht First Nation Canoe Project was years in the making. According to Project Assistant Intern Nicole Watts, it was the idea of Ken Watts, now NTC Vice President. &quot;I remember being in the Paddling Together event and we noticed that there were only two or three cedar canoes and the rest were fiber glass,&quot; said Nicole. At one time Tseshaht didn&#39;t have useable canoes and Nicole remembers how Hupacasath allowed Tseshaht youth to use their fiber glass canoes, prompting Tseshaht to purchase two fiber glass canoes for their community. Later, the people started making plans to have cedar canoes made; partly because of the cultural connection to cedar and partly to provide an opportunity to Tseshaht members to learn the art of canoe-making from Master Carver Joe Martin of Tla-o-qui-aht First Nation.

Tseshaht artist Gordon Dick and Master Carver Joe Martin pose with the new Tseshaht canoe. In one month Martin transformed a cedar log into this beautiful piece of art.

With a log donated by Western Forest Products, Martin along with his brother Carl and nephew Francis Martin began the work on Sept. 14. A month later the canoe was steamed, a process that allows the wood to become pliable, enabling the canoe to be widened. On Oct. 15 the canoe was moved to Ahtsik Native Art Gallery, owned by Gordon Dick. The Martins are putting the finishing touches on the canoe but it won&#39;t be complete until early in the New Year. Joe Martin says the canoe needs to sit and dry awhile before it can be painted. Nicole Watts says over the next few days the artists will finish the wood work and sand the canoe. &quot;It&#39;s really amazing how fast the work went and Joe shared a lot of teachings about canoe making,&quot; said Nicole. When finished, the canoe will be used by Tseshaht members for canoe journeys, youth activities and any cultural events. Tyrone Marshall, Tseshaht&#39;s Sports and Recreation worker will take charge of the canoe and will care for it. Plans are in the works for a traditional blessing and launching ceremony.

Control your diabetes and live your dreams By Debora Steel Ha-Shilth-Sa Reporter Port Alberni-When Juno-award winning country music star George Canyon was a kid, all he dreamed about was becoming a pilot. He strongly felt that he needed to serve the country and be in the air force, so at age 12 he enlisted in the Air Cadets. His first flight was in a glider and he loved it. He was soon in a helicopter, and had a perma-grin on his face for the next year, he told a crowd at the Canadian Diabetes Association conference held Oct. 10 to 13 in Vancouver. It was in 1984, a month before Christmas, when he started to exhibit symptoms of onset juvenile diabetes, and on Boxing Day was taken to the hospital where they found he had a 44 blood sugar count.

After some time spent in the hospital and the family&#39;s efforts to get his diabetes in check, he finally went back to Cadets where his captain told him &quot;You will never be a pilot and you will never be in the Air Force.&quot; Canyon left the cadets and tucked his dreams away. At that point Canyon could have rebelled against the disease that tends to isolate and make kids feel different, but he decided at that young age that diabetes was not going to take his dreams away. Even though he had been playing music since he was four years old he never thought it could be a career. In Grade 5 he even formed a band and performed two songs, &quot;A Hard Day&#39;s Night&quot; and &quot;The Rose,&quot; he joked. But Canyon went off to university with the idea he would become a doctor, and finished premed with honors. Then he went on the road with a coun-

try band and never went back to medicine. The life of a performer presents a diabetic with a number of challenges, as people can imagine, but after 28 years of living with the disease he has concluded that eighty to ninety per cent of living with the disease, and living well, comes from the mind. Diabetics can control the disease, or it can control them, he said. The purpose of the speech to the professionals who work with people who have diabetes was to provide tools of encouragement. What drove Canyon was a simple goalhe still wanted to be a pilot in the air force. &quot;GDDC,&quot; he said. &quot;Goal Driven Diabetes Control.&quot; &quot;I had a goal that drove me to take control of my diabetes.&quot; Continued on Page 5. If undeliverable, please return to: Ha-Shilth-Sa P.O. Box 1383, Port Alberni, B.C. V9Y 7M2