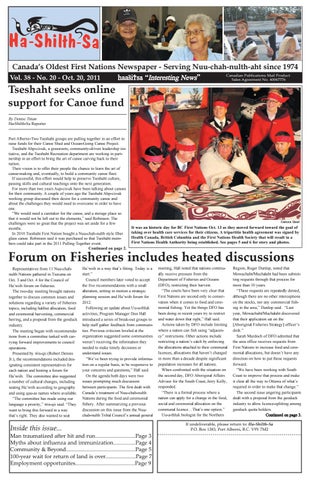 Tseshaht seeks online support for Canoe fund By Denise Titian Ha-Shilth-Sa Reporter Port Alberni–Two Tseshaht groups are pulling together in an effort to raise funds for their Canoe Shed and Ocean-Going Canoe Project. Tseshaht Ahp-cii-uk, a grassroots, community-driven leadership initiative, and the Tseshaht Recreation department are working in partnership in an effort to bring the art of canoe carving back to their nation. Their vision is to offer their people the chance to learn the art of canoe-making and, eventually, to build a community canoe fleet. If successful, this effort would help to preserve Tseshaht culture, passing skills and cultural teachings onto the next generation. For more than two years Aup-cii-uk have been talking about canoes for their community. A couple of years ago the Tseshaht Ahp-cii-uk working group discussed their desire for a community canoe and about the challenges they would need to overcome in order to have one. “We would need a caretaker for the canoe, and a storage place so that it would not be left out to the elements,” said Robinson. The challenges were so great that the project was set aside for a few months. In 2010 Tseshaht First Nation bought a Nuu-chah-nulth style fiber glass canoe. Robinson said it was purchased so that Tseshaht members could take part in the 2011 Pulling Together event. Continued on page 2.

It was an historic day for BC First Nations Oct. 13 as they moved forward toward the goal of taking over health care services for their citizens. A tripartitie health agreement was signed by Health Canada, British Columbia and the First Nations Health Society that will result in a First Nations Health Authority being established. See pages 5 and 6 for story and photos.

Forum on Fisheries includes heated discussions Representatives from 11 Nuu-chahnulth Nations gathered in Tsaxana on Oct. 3 and Oct. 4 for the Council of Ha’wiih forum on fisheries. The two-day meeting brought nations together to discuss common issues and solutions regarding a variety of fisheries topics, including halibut allocation, food and ceremonial harvesting, commercial herring, and a proposal from the geoduck industry. The meeting began with recommendations from a committee tasked with carrying forward improvements to council operations. Presented by w^is-qii (Robert Dennis Jr.), the recommendations included designating consistent representatives for each nation and hosting a forum for Ha’wiih. The committee also suggested a number of cultural changes, including seating Ha’wiih according to geography and using quu-as names where available. “The committee has made using our language a priority,” w^is-qii said. “They want to bring this forward in a way that’s right. They also wanted to seat

Ha’wiih in a way that’s fitting. Today is a start.” Council members later voted to accept the five recommendations with a small alteration, setting in motion a strategic planning session and Ha’wiih forum for 2012. Following an update about Uu-a-thluk activities, Program Manager Don Hall introduced a series of break-out groups to help staff gather feedback from communities. Previous criticism leveled at the organization suggested some communities weren’t receiving the information they needed to make timely decisions or understand issues. “We’ve been trying to provide information on a regular basis, to be responsive to your concerns and questions,” Hall said. On the agenda both days were two issues prompting much discussion between participants. The first dealt with Canada’s treatment of Nuu-chah-nulth Nations during the food and ceremonial fishery. After summarizing a previous discussion on this issue from the Nuu=chah=-nulth Tribal Council’s annual general

meeting, Hall noted that nations continually receive pressure from the Department of Fisheries and Oceans (DFO), restricting their harvest. “The courts have been very clear that First Nations are second only to conservation when it comes to food and ceremonial fishing. Yet the things DFO has been doing in recent years try to restrict and water down that right,” Hall said. Actions taken by DFO include limiting where a nation can fish using “adjacency” restrictions. Other actions include restricting a nation’s catch by enforcing the allocations attached to their communal licences, allocations that haven’t changed in more than a decade despite significant population increases for all nations. When confronted with the situation on the second day, DFO Aboriginal Affairs Advisor for the South Coast, Jerry Kelly, responded. “There is a formal process where a nation can apply for a change in the food, social and ceremonial allocation on the communal licence…That’s one option.” Uu-a-thluk biologist for the Northern

Region, Roger Dunlop, noted that Mowachaht/Muchalaht had been submitting requests through that process for more than 10 years. “These requests are repeatedly denied, although there are no other interceptions on the stocks, nor any commercial fishing in the area,” Dunlop said. “Last year, Mowachaht/Muchalaht discovered that their application sat on the [Aboriginal Fisheries Strategy] officer’s desk.” Sarah Murdoch of DFO admitted that the area office receives requests from First Nations to increase food and ceremonial allocations, but doesn’t have any direction on how to put those requests forward. “We have been working with South Coast to improve that process and make it clear all the way to Ottawa of what’s required in order to make that change.” The second issue angering participants dealt with a proposal from the geoduck industry to allow licence-splitting among geoduck quota holders. Continued on page 3.