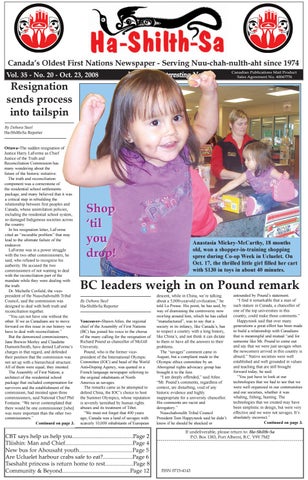 Resignation sends process into tailspin By Debora Steel Ha-Shilth-Sa Reporter Ottawa–The sudden resignation of Justice Harry LaForme as Chief Justice of the Truth and Reconciliation Commission has many wondering about the future of the historic initiative. The truth and reconciliation component was a cornerstone of the residential school settlements package, and many believed that it was a critical step in rebuilding the relationship between first peoples and Canada, whose assimilation policies, including the residential school system, so damaged Indigenous societies across the country. In his resignation letter, LaForme cited an “incurable problem” that may lead to the ultimate failure of the endeavor. LaForme was in a power struggle with the two other commissioners, he said, who refused to recognize his authority. He accused the two commissioners of not wanting to deal with the reconciliation part of the mandate while they were dealing with the truth. Dr. Michelle Corfield, the vicepresident of the Nuu-chah-nulth Tribal Council, said the commission was designed to deal with both truth and reconciliation together. “You can not have one without the other. If we as Canadians are to move forward on this issue in our history we have to deal with reconciliation.” But the demonized commissioners, Jane Brewin Morley and Claudette Dumont-Smith, have denied LaForme’s charges in that regard, and defended their position that the commission was not set up with a hierarchical structure. All of them were equal, they insisted. The Assembly of First Nation, a architect of the residential school package that included compensation for survivors and the establishment of the commission, had insisted upon three commissioners, said National Chief Phil Fontaine. “We never contemplated that there would be one commissioner [who] was more important than the other two commissioners.” Continued on page 3.

Shop ‘til you drop!

Anastasia Mickey-McCarthy, 18 months old, won a shopper-in-training shopping spree during Co-op Week in Ucluelet. On Oct. 17, the thrilled little girl filled her cart with $130 in toys in about 40 minutes.

BC leaders weigh in on Pound remark By Debora Steel Ha-Shilth-Sa Reporter Vancouver–Shawn Atleo, the regional chief of the Assembly of First Nations (BC) has joined his voice to the chorus of the many calling for the resignation of Richard Pound as chancellor of McGill University. Pound, who is the former vicepresident of the International Olympic Committee (IOC) and head of the World Anti-Doping Agency, was quoted in a French language newspaper referring to the original inhabitants of North America as savages. The remarks came as he attempted to defend China, the IOC’s choice to host the Summer Olympics, whose reputation is severely tarnished by human rights abuses and its treatment of Tibet. “We must not forget that 400 years ago, Canada was a land of savages with scarcely 10,000 inhabitants of European

descent, while in China, we’re talking about a 5,000-year-old civilization,” he told La Presse. His point, he has said, by way of dismissing the controversy now swirling around him, which he has called “manufactured”, was to say that a society in its infancy, like Canada’s, has to respect a country with a long history, like China’s, and not think it can dictate to them or have all the answers to their problems. The “savages” comment came in August, but a complaint made to the Olympic ethics committee by an Aboriginal rights advocacy group has brought it to the fore. “I am deeply offended,” said Atleo. “Mr. Pound’s comments, regardless of context, are disturbing, void of any historic evidence and highly inappropriate for a university chancellor. His comments are racist and derogatory.” Nuu-chah-nulth Tribal Council President Tom Happynook said he didn’t know if he should be shocked or

astounded by Pound’s statement. “I find it remarkable that a man of such stature in Canada, a chancellor of one of the top universities in this country, could make those comments.” Happynook said that over many generations a great effort has been made to build a relationship with Canadians that is meaningful and mutual “and for someone like Mr. Pound to come out and say that we were just savages when the newcomers arrived in this country is absurd.” Native societies were well established and well grounded in values and teaching that are still brought forward today, he said. “You just have to look at our technologies that we had to see that we were well organized in our communities and our societies, whether it was whaling, fishing, hunting. The technologies that we created may have been simplistic in design, but were very effective and we were not savages. It’s absolutely incorrect.” Continued on page 3.