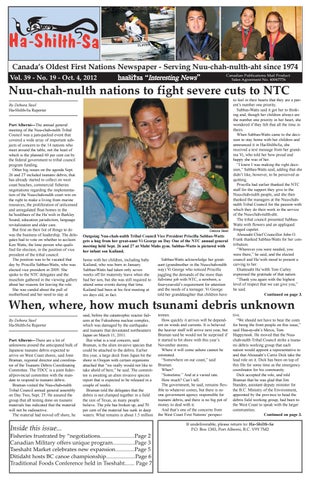 Nuu-chah-nulth nations to fight severe cuts to NTC By Debora Steel Ha-Shilth-Sa Reporter Port Alberni—The annual general meeting of the Nuu-chah-nulth Tribal Council was a jam-packed event that covered a wide array of important subjects of concern to the 14 nations who meet around the table, not the least of which is the planned 60 per cent cut by the federal government to tribal council program funding. Other big issues on the agenda Sept. 26 and 27 included tsunami debris, that has already started to collect on west coast beaches, commercial fisheries negotiations regarding the implementation of the Nuu-chah-nulth court win on the right to make a living from marine resources, the proliferation of unlicensed and unregulated float homes in the ha’houlthees of the Ha’wiih in Barkley Sound, education jurisdiction, language revitalization and elder care. But first on their list of things to do was the business of leadership. The delegates had to vote on whether to acclaim Ken Watts, the lone person who qualified for election, in the position of vice president of the tribal council. The position was to be vacated that day by Priscilla Sabbas-Watts, who was elected vice president in 2009. She spoke to the NTC delegates and the muschim gathered in the viewing gallery about her reasons for leaving the role. She was candid about the pull of motherhood and her need to stay at

Outgoing Nuu-chah-nulth Tribal Council Vice President Priscilla Sabbas-Watts gets a hug from her great-aunt Vi George on Day One of the NTC annual general meeting held Sept. 26 and 27 at Maht Mahs gym. Sabbas-Watts is pictured with her infant son Kailand. home with her children, including baby Kailand, who was born in January. Sabbas-Watts had taken only seven weeks off for maternity leave when she had her son, but she was still required to attend some events during that time. Kailand had been at his first meeting at six days old, in fact.

Sabbas-Watts acknowledge her greataunt (grandmother in the Nuu-chah-nulth way) Vi George who noticed Priscilla juggling the demands of the more than full-time job with NTC, a newborn, a four-year-old’s requirement for attention and the needs of a teenager. Vi George told her granddaughter that children have

to feel in their hearts that they are a parent’s number one priority. Sabbas-Watts said it got her to thinking and, though her children always are the number one priority in her heart, she wondered if they felt that all the time in theirs. When Sabbas-Watts came to the decision to stay home with her children and announced it in Ha-Shilth-Sa, she received a text message from her grandma Vi, who told her how proud and happy she was of her. “I knew I was making the right decision,” Sabbas-Watts said, adding that she didn’t like, however, to be perceived as quitting. Priscilla had earlier thanked the NTC staff for the support they give to the Nuu-chah-nulth people, and she then thanked the managers at the Nuu-chahnulth Tribal Council for the passion with which they do their work in the service of the Nuu-chah-nulth-aht. The tribal council presented SabbasWatts with flowers and an appliqued fringed capelet. Ahousaht Chief Councillor John O. Frank thanked Sabbas-Watts for her contribution. “Wherever you were needed, you were there,” he said, and the elected council and Ha’wiih stood to present a carving to her. Ehattesaht Ha’wilth Tom Curley expressed the gratitude of that nation. “Thank you again with the highest level of respect that we can give you,” he said. Continued on page 3.

When, where, how much tsunami debris unknown By Debora Steel Ha-Shilth-Sa Reporter Port Alberni—There are a lot of unknowns around the anticipated bulk of Japanese tsunami debris expected to arrive on West Coast shores, said Jonn Braman, regional director and coordinator of the Tsunami Debris Coordinating Committee. The TDCC is a joint federal/provincial committee with the mandate to respond to tsunami debris. Braman visited the Nuu-chah-nulth Tribal Council annual general assembly on Day Two, Sept. 27. He assured the group that all testing done on tsunami materials has indicated that the material will not be radioactive. The material had moved off shore, he

said, before the catastrophic reactor failures at the Fukushima nuclear complex, which was damaged by the earthquake and tsunami that devastated northeastern Japan on March 11, 2011. But what is a real concern, said Braman, is the alien invasive species that could be attached to the debris. Earlier this year, a large dock from Japan hit the shore in Oregon with certain organisms attached that “we really would not like to take ahold of here,” he said. The committee is awaiting an alien invasive species report that is expected to be released in a couple of weeks. Braman told the delegates that the debris is not clumped together in a field the size of Texas, as many people believe. The pile has broken up, and 70 per cent of the material has sunk in deep waters. What remains is about 1.5 million

tonnes. How quickly it arrives will be dependent on winds and currents. It is believed the heavier stuff will arrive next year, but Braman said he would not be surprised if it started to hit shore with this year’s November storms. Where it will come ashore cannot be estimated. “Somewhere on our coast,” said Braman. When? “Sometime.” And at a varied rate. How much? Can’t tell. The government, he said, remains flexible to whatever comes, but there is no one government agency responsible for tsunami debris, and there is no big pot of money to deal with it. And that’s one of the concerns from the West Coast First Nations’ perspec-

tive. “We should not have to bear the costs for being the front people on this issue,” said Huu-ay-aht’s Mexis, Tom Happynook. He moved that the Nuuchah-nulth Tribal Council strike a tsunami debris working group that each nation would appoint a representative to and that Ahousaht’s Curtis Dick take the lead role on it. Dick has been on top of this file for some time as the emergency coordinator for his community. Dick accepted the role, and told Braman that he was glad that Jim Standen, assistant deputy minister for the B.C. Ministry of the Environment, appointed by the province to head the debris field working group, had been to the West Coast to speak with the larger communities. Continued on page 3.