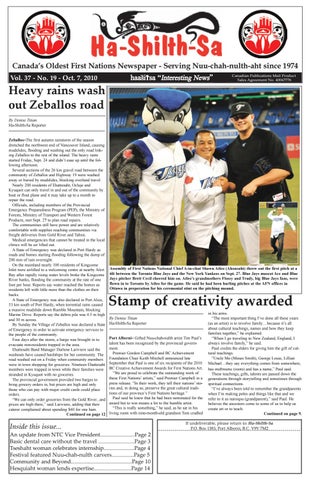 Heavy rains wash out Zeballos road By Denise Titian Ha-Shilth-Sa Reporter Zeballos–The first autumn rainstorm of the season drenched the northwest end of Vancouver Island, causing mudslides, flooding and washing out the only road linking Zeballos to the rest of the island. The heavy rains started Friday, Sept. 24 and didn’t ease up until the following afternoon. Several sections of the 26 km gravel road between the community of Zeballos and Highway 19 were washed away or buried by mudslides, blocking overland travel. Nearly 200 residents of Ehattesaht, Ocluje and Kyuquot can only travel in and out of the community by boat or float plane and it may take up to a month to repair the road. Officials, including members of the Provincial Emergency Preparedness Program (PEP), the Ministry of Forests, Ministry of Transport and Western Forest Products, met Sept. 27 to plan road repairs. The communities still have power and are relatively comfortable with supplies reaching communities via freight deliveries from Gold River and Tahsis. Medical emergencies that cannot be treated in the local clinics will be air lifted out. A State of Emergency was declared in Port Hardy as roads and homes starting flooding following the dump of 200 mm of rain overnight. On the mainland nearly 100 residents of Kingcome Inlet were airlifted to a welcoming centre at nearby Alert Bay after rapidly rising water levels broke the Kingcome River banks, flooding the community at the rate of one foot per hour. Reports say water reached the homes as residents left with little more than the clothes on their backs. A State of Emergency was also declared in Port Alice, 53 km south of Port Hardy, when torrential rains caused a massive mudslide down Rumble Mountain, blocking Marine Drive. Reports say the debris pile was 4.5 m high and 30 m across. By Sunday the Village of Zeballos was declared a State of Emergency in order to activate emergency services to the people of the community. Four days after the storm, a barge was brought in to evacuate non-residents trapped in the area. Ehattesaht Band Manager Darlene Lariviere said the washouts have caused hardships for her community. The road washed out on a Friday when community members were in town shopping for groceries. Nineteen Ehattesaht members were trapped in town while their families were stranded in Kyuquot with no groceries. The provincial government provided two barges to bring grocery orders in, but prices are high and only those who can pay with major credit cards could place orders. “We can only order groceries from the Gold River...and prices are high there,” said Lariviere, adding that their caterer complained about spending $40 for one ham. Continued on page 12

Assembly of First Nations National Chief A-in-chut Shawn Atleo (Ahousaht) threw out the first pitch at a tilt between the Toronto Blue Jays and the New York Yankees on Sept. 27. Blue Jays mascot Ace and Blue Jays pitcher Brett Cecil cheered him on. Atleo’s grandmothers Flossy and Trudy, big Blue Jays fans, were flown in to Toronto by Atleo for the game. He said he had been hurling pitches at the AFN offices in Ottawa in preperation for his ceremonial stint on the pitching mound.

Stamp of creativity awarded By Denise Titian Ha-Shilth-Sa Reporter Port Alberni– Gifted Nuu-chah-nulth artist Tim Paul’s talent has been recognized by the provincial government. Premier Gordon Campbell and BC Achievement Foundation Chair Keith Mitchell announced late September that Paul is one of six recipients of the 2010 BC Creative Achievement Awards for First Nations Art. “We are proud to celebrate the outstanding work of these First Nations’ artists,” said Premier Campbell in a press release. “In their work, they tell their nations’ stories and, in doing so, preserve the great cultural traditions of our province’s First Nations heritage.” Paul said he knew that he had been nominated for the award but to win means a lot to the humble artist. “This is really something,” he said, as he sat in his living room with nine-month-old grandson Tom cradled

in his arms. “The most important thing I’ve done all these years (as an artist) is to involve family…because it’s all about cultural teachings, names and how they keep families together,” he explained. “When I go traveling to New Zealand, England, I always involve family,” he said. Paul credits the elders for giving him the gift of cultural teachings. “Uncle Mo (Moses Smith), George Louie, Lillian Michael…they say everything comes from somewhere, has mu&gt;mumc (roots) and has a name,” Paul said. These teachings, gifts, talents are passed down the generations through storytelling and sometimes through spiritual connections. “I’ve always been told to remember the grandparents when I’m making poles and things like that and we refer to it as naniiqsu (grandparent),” said Paul. He believes the ancestors come to some of us to help us create art or to teach. Continued on page 9.