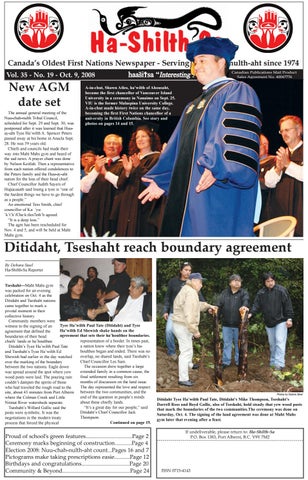 New AGM date set The annual general meeting of the Nuu-chah-nulth Tribal Council, scheduled for Sept. 29 and Sept. 30, was postponed after it was learned that Huuay-aht Tyee Ha’wilth A. Spencer Peters passed away at his home in Anacla Sept. 28. He was 59 years old. Chiefs and councils had made their way into Maht Mahs gym and heard of the sad news. A prayer chant was done by Nelson Keitlah. Then a representative from each nation offered condolences to the Peters family and the Huu-ay-aht nation for the loss of their head chief. Chief Councillor Judith Sayers of Hupacasath said losing a tyee is “one of the hardest things we have to go through as a people.” An emotional Tess Smith, chief councillor of Ka: ’yu: ’k’t’h’/Che:k:tles7eth’h agreed. “It is a deep loss.” The agm has been rescheduled for Nov. 4 and 5, and will be held at Maht Mahs gym.

A-in-chut, Shawn Atleo, ha’wilth of Ahousaht, became the first chancellor of Vancouver Island University in a ceremony in Nanaimo on Sept. 25. VIU is the former Malaspina University College. A-in-chut made history twice on the same day, becoming the first First Nations chancellor of a university in British Columbia. See story and photos on pages 14 and 15.

Ditidaht, Tseshaht reach boundary agreement By Debora Steel Ha-Shilth-Sa Reporter Tseshaht—Maht Mahs gym was packed for an evening celebration on Oct. 4 as the Ditidaht and Tseshaht nations came together to mark a pivotal moment in their collective history. Community members were Tyee Ha’wilth Paul Tate (Ditidaht) and Tyee witness to the signing of an Ha’wilth Ed Shewish shake hands on the agreement that defined the agreement that sets their ha’houlthee boundaries. boundaries of their head representation of a border. In times past, chiefs’ lands or ha’houlthee. a nation knew where their tyee’s haDitidaht’s Tyee Ha’wilth Paul Tate houlthee began and ended. There was no and Tseshaht’s Tyee Ha’wilth Ed overlap, no shared lands, said Tseshaht’s Shewish had earlier in the day watched Chief Councillor Les Sam. over the marking of the boundary The occasion drew together a large between the two nations. Eagle down extended family in a common cause, the was spread around the spot where yew final settlement resulting from six wood posts were laid. The pouring rain months of discussion on the land issue. couldn’t dampen the spirits of those The day represented the love and respect who had traveled the rough road to the site, about 45 minutes from Port Alberni between the two communities, and the end of the question in people’s minds where the Colman Creek and Little about these chiefly lands. Nitinat River watersheds separate. “It’s a great day for our people,” said Tseshaht’s Willard Gallic said the Ditidaht’s Chief Councillor Jack posts were symbolic. It was the Thompson. negotiations in the modern treaty Continued on page 19. process that forced the physical