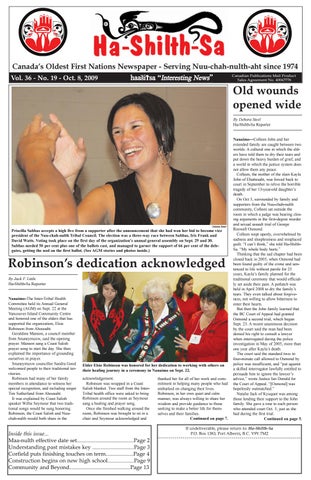 Priscilla Sabbas accepts a high five from a supporter after the announcement that she had won her bid to become vice president of the Nuu-chah-nulth Tribal Council. The election was a three-way race between Sabbas, Iris Frank and David Watts. Voting took place on the first day of the organization’s annual general assembly on Sept. 29 and 30. Sabbas needed 50 per cent plus one of the ballots cast, and managed to garner the support of 66 per cent of the delegates, getting the nod on the first ballot. (See AGM stories and photos inside.)

Robinson’s dedication acknowledged By Jack F. Little Ha-Shilth-Sa Reporter Nanaimo–The Inter-Tribal Health Committee held its Annual General Meeting (AGM) on Sept. 22 at the Vancouver Island Community Centre and honored one of the elders that has supported the organization, Elsie Robinson from Ahousaht. Geraldine Manson, a council member from Snuneymuxw, said the opening prayer. Manson sang a Coast Salish prayer song to start the day. She then explained the importance of grounding ourselves in prayer. Snuneymuxw councillor Sandra Good welcomed people to their traditional territories. Robinson had many of her family members in attendance to witness her special recognition, and including singer Tim Sutherland from Ahousaht. It was explained by Coast Salish speaker Willie Seymour that two traditional songs would be sung honoring Robinson, the Coast Salish and Nuuchah-nulth would both share in the

Elder Elsie Robinson was honored for her dedication to working with others on their healing journey in a ceremony in Nanaimo on Sept. 22. acknowledgement. Robinson was wrapped in a Coast Salish blanket. Two staff from the InterTribal health office were asked to bring Robinson around the room as Seymour sang a healing and prayer song. Once she finished walking around the room, Robinson was brought to sit in a chair and Seymour acknowledged and

thanked her for all of her work and commitment in helping many people who had embarked on changing their lives. Robinson, in her own quiet and calm manner, was always willing to share her wisdom and provide guidance to those seeking to make a better life for themselves and their families. Continued on page 7.

Nanaimo—Colleen John and her extended family are caught between two worlds: A cultural one in which the elders have told them to dry their tears and put down the heavy burden of grief, and a world in which the justice system does not allow them any peace. Colleen, the mother of the slain Kayla John of Ehattesaht, was forced back to court in September to relive the horrible tragedy of her 13-year-old daughter’s death. On Oct 5, surrounded by family and supporters from the Nuu-chah-nulth community, Colleen sat outside the room in which a judge was hearing closing arguments in the first-degree murder and sexual assault trial of George Roswell Osmond. Colleen wept openly, overwhelmed by sadness and sleeplessness and misplaced guilt. “I can’t think,” she told Ha-ShilthSa. “My whole body hurts.” Thinking that the sad chapter had been closed back in 2005, when Osmond had been found guilty of the crime and sentenced to life without parole for 25 years, Kayla’s family planned for the traditional ceremony that would officially set aside their pain. A potlatch was held in April 2008 to dry the family’s tears. They even talked about forgiveness, not willing to allow bitterness to enter their hearts. But then the John family learned that the BC Court of Appeal had granted Osmond a second trial, which began Sept. 23. A recent unanimous decision by the court said the man had been denied his right to consult a lawyer when interrogated during the police investigation in May of 2005, more than one year after Kayla’s death. The court said the standard two- to four-minute call allowed to Osmond by police was insufficient, and “put against a skilled interrogator lawfully entitled to persuade him to ignore the lawyer’s advice,” wrote Justice Ian Donald for the Court of Appeal. “[Osmond] was hopelessly outmatched.” Natalie Jack of Kyuquot was among those lending their support to the John family. She gave a rose to each person who attended court Oct. 5, just as she had during the first trial. Continued on page 5.