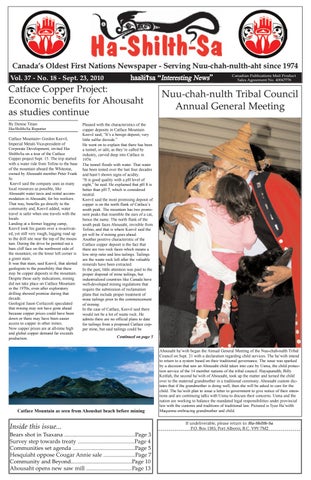 Catface Copper Project: Economic benefits for Ahousaht as studies continue By Denise Titian Ha-Shilth-Sa Reporter Catface Mountain– Gordon Keevil, Imperial Metals Vice-president of Corporate Development, invited HaShilth-Sa on a tour of the Catface Copper project Sept. 15. The trip started with a water ride from Tofino to the base of the mountain aboard the Whitestar, owned by Ahousaht member Peter Frank Sr. Keevil said the company uses as many local resources as possible, like Ahousaht water taxis and rental accommodation in Ahousaht, for his workers. That way, benefits go directly to the community and, Keevil added, water travel is safer when one travels with the locals. Landing at a former logging camp, Keevil took his guests over a re-activated, yet still very rough, logging road up to the drill site near the top of the mountain. During the drive he pointed out a bare cliff face on the northwest side of the mountain; on the lower left corner is a green stain. It was that stain, said Keevil, that alerted geologists to the possibility that there may be copper deposits in the mountain. Despite those early indications, mining did not take place on Catface Mountain in the 1970s, even after exploratory drilling showed promise during that decade. Geologist Jason Corlazzoli speculated that mining may not have gone ahead because copper prices could have been down or there may have been easier access to copper in other mines. Now copper prices are at all-time high and global copper demand far exceeds production.

Pleased with the characteristics of the copper deposits in Catface Mountain Keevil said, “It’s a benign deposit, very little sulfur dioxide.” He went on to explain that there has been a tunnel, or adit, as they’re called by industry, carved deep into Catface in 1974. The tunnel floods with water. That water has been tested over the last four decades and hasn’t shown signs of acidity. “It is good quality with a pH level of eight,” he said. He explained that pH 8 is better than pH 7, which is considered neutral. Keevil said the most promising deposit of copper is on the north flank of Catface’s south peak. The mountain has two prominent peaks that resemble the ears of a cat, hence the name. The north flank of the south peak faces Ahousaht, invisible from Tofino, and that is where Keevil said the pit will be if mining goes ahead. Another positive characteristic of the Catface copper deposit is the fact that there are two rock faces which means a low strip ratio and less tailings. Tailings are the waste rock left after the valuable minerals have been extracted. In the past, little attention was paid to the proper disposal of mine tailings, but industrialized countries like Canada have well-developed mining regulations that require the submission of reclamation plans that include proper treatment of mine tailings prior to the commencement of mining. In the case of Catface, Keevil said there would not be a lot of waste rock. He admits there are no official plans to date for tailings from a proposed Catface copper mine, but said tailings could be Continued on page 5

Catface Mountain as seen from Ahoushat beach before mining

Ahousaht ha’wiih began the Annual General Meeting of the Nuu-chah-nulth Tribal Council on Sept. 21 with a declaration regarding child services. The ha’wiih intend to return to a system based on their traditional governance. The issue was sparked by a decision that saw an Ahousaht child taken into care by Usma, the child protection service of the 14 member nations of the tribal council. Hayupunulth, Billy Keitlah, the second ha’wiih of Ahousaht, took up the matter and turned the child over to the maternal grandmother in a traditional ceremony. Ahousaht custom dictates that if the grandmother is doing well, then she will be asked to care for the child. The ha’wiih plan to issue a letter to government to give notice of their intentions and are continuing talks with Usma to discuss their concerns. Usma and the nation are working to balance the mandated legal responsibilities under provincial law with the customs and traditions of traditional law. Pictured is Tyee Ha’wilth Maquinna embracing grandmother and child. If undeliverable, please return to: Ha-Shilth-Sa P.O. Box 1383, Port Alberni, B.C. V9Y 7M2