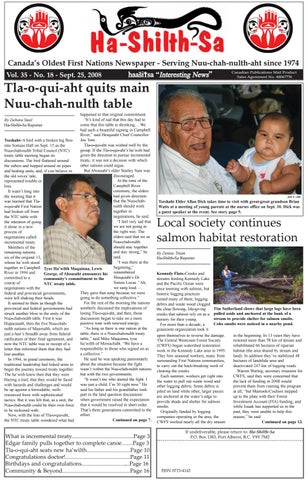 Tla-o-qui-aht quits main Nuu-chah-nulth table happened to that original commitment. “It’s kind of sad that this day had to come that this table is shrinking… We had such a beautiful signing in Campbell River,” said Hesquiaht Chief Councillor Joe Tom. Tseshaht–A bird with a broken leg flew Tla-o-qui-aht was wished well by the into Somass Hall on Sept. 15 as the group. If the Tla-o-qui-aht’s ha’wiih had Nuu-chah-nulth Tribal Council (NTC) given the direction to pursue incremental treaty table meeting began its treaty, it was not a decision with which discussions. The bird fluttered around other nations could argue. the rafters and hopped around on pipes But Ahousaht’s elder Stanley Sam was and heating units, and, if you believe in discouraged. the old wives’ tale, At the time of the represented trouble or Campbell River loss. ceremony, the elders It wasn’t long into had given direction the meeting that it that the Nuu-chahwas learned that Tlanulth should work o-qui-aht First Nation together in had broken off from negotiations, he said. the NTC table with “I feel very sad that the intention of going we are not going in it alone in a new the right way. The process of elders said that we as negotiations called Nuu-chah-nulth incremental treaty. should stay together Members of the and stay strong,” he remaining nations, said. six of the original 13, “I was there at the whose ha’wiih stood beginning,” together in Campbell Tyee Ha’wilth Maquinna, Lewis River in 1994 and George, of Ahousaht announces his remembered Hesquiaht’s Dr. committed to a community’s committment to the Simon Lucas. “Ah, course of NTC treaty table. we sang loud. … negotiations with the They gave that song because we were federal and provincial governments, going to do something collective.” were left shaking their heads. For the rest of the morning the nations It seemed to them as though the somberly discussed the implications of provincial and federal governments had losing Tla-o-qui-aht, and then, those struck another blow to the unity of the discussions began to take on a more Nuu-chah-nulth table. First it was positive tone with renewed energy. Hupacasath, then the five Nuu-chah“As long as there is one nation at the nulth nations of Maa-nulth, which are table, there is a Nuu-chah-nulth treaty just a hair’s breadth away from federal table,” said Mike Maquinna, tyee ratification of their final agreement, and ha’wilth of Mowachaht. “We have a now the NTC table was in receipt of a responsibility to those who signed on as letter that informed them that they had a collective.” lost another. He said he was speaking passionately In 1994, in grand ceremony, the about the situation because the fight traditional leadership had linked arms to wasn’t within the Nuu-chah-nulth nations begin the journey toward treaty together. but with the two governments. The ha’wiih knew then that they were “It wasn’t me who started the fight. I blazing a trail; that they would be faced was just a child. I’m 50 right now.” He with hazards and challenges and would said his father and his grandfather took be up against a formidable, wellpart in the land question discussions resourced force with sophisticated when government raised the expectation tactics. But it was felt that, as a unit, the Nuu-chah-nulth could be their own force that it would be resolved in short order. That’s three generations committed to the to be reckoned with. effort. Now, with the loss of Tla-o-qui-aht, Continued on page 7. the NTC treaty table wondered what had By Debora Steel Ha-Shilth-Sa Reporter

Tseshaht Elder Allan Dick takes time to visit with great-great grandson Brian Watts at a meeting of young parents at the nurses office on Sept. 10. Dick was a guest speaker at the event. See story page 9.

Local society continues salmon habitat restoration By Denise Titian Ha-Shilth-Sa Reporter Kennedy Flats–Creeks and streams feeding Kennedy Lake and the Pacific Ocean were once teeming with salmon, but historic logging practices ruined many of them; logging debris and waste wood clogged Tim Sutherland shows that large logs have been the clear flowing, life-giving creeks that salmon rely on as a pulled aside and anchored at the bank of a stream to provide shelter for salmon smolts. nursery for their young. Coho smolts were noticed in a nearby pond. For more than a decade, a grassroots organization took it upon themselves to reverse the damage. in the beginning. In 13 years they have The Central Westcoast Forest Society restored more than 78 km of stream and (CWFS) began watershed restoration rehabilitated 66 hectares of riparian work in the Kennedy Lake area in 1995. habitat (the area shared by stream and They hire seasonal workers, many from land). In addition they’ve stabilized 48 surrounding First Nations communities, hectares of landslide area and to carry out the back-breaking work of deactivated 247 km of logging roads. clearing the creeks. Warren Warttig, secretary treasurer for Each summer, workers get right into CWFS, said they were concerned that the water to pull out waste wood and the lack of funding in 2008 would other logging debris. Some debris is prevent them from running the program piled on land while other, larger pieces at all, “but Mamook-Coulson stepped are anchored at the water’s edge to up to the plate with their Forest provide shade and shelter for salmon Investment Account (FIA) funding, and smolts. while Iisaak has supported us in the Originally funded by logging past, they were unable to help this companies operating in the area, the season,” he said. CWFS worked nearly all the dry season Continued on page 13. If undeliverable, please return to: Ha-Shilth-Sa P.O. Box 1383, Port Alberni, B.C. V9Y 7M2