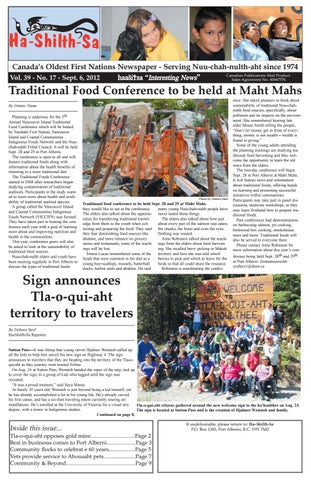 Traditional Food Conference to be held at Maht Mahs By Denise Titian Planning is underway for the 5th Annual Vancouver Island Traditional Food Conference which will be hosted by Tseshaht First Nation, Vancouver Island and Coastal Communities Indigenous Foods Network and the Nuuchah-nulth Tribal Council. It will be held Sept. 28 and 29 in Port Alberni. The conference is open to all and will feature traditional foods along with information about the health benefits of returning to a more traditional diet. The Traditional Foods Conference started in 2008 after researchers began studying contamination of traditional seafoods. Participants in the study wanted to learn more about health and availability of traditional seafood species. A group called the Vancouver Island and Coastal Communities Indigenous Foods Network (VICCIFN) was formed. They have taken part in hosting the conference each year with a goal of learning more about and improving nutrition and health in the communities. This year, conference goers will also be asked to look at the sustainability of traditional food sources. Nuu-chah-nulth elders and youth have been meeting regularly in Port Alberni to discuss the types of traditional foods

Traditional food conference to be held Sept. 28 and 29 at Maht Mahs. they would like to see at the conference. many young Nuu-chah-nulth people have The elders also talked about the opportunever tasted those things. nities for transferring traditional knowlThe elders also talked about how just edge from them to the youth when colabout every part of the salmon was eaten; lecting and preparing the food. They said the cheeks, the brain and even the eyes. they fear diminishing food sources like Nothing was wasted. abalone, and more reliance on grocery Anne Robinson talked about the teachstores and restaurants, some of the teach- ings from the elders about food harvestings will be lost. ing. She recalled berry picking in Makah Simon Lucas remembered some of the territory and how she was told which foods that were common in his diet as a berries to pick and which to leave for the young boy–scallops, mussels, butterball birds so that all could share the resource. Robinson is coordinating the conferducks, harbor seals and abalone. He said

ence. She asked planners to think about sustainability of traditional Nuu-chahnulth food sources, specifically, about pollution and its impacts on the environment. She remembered hearing late elder Moses Smith telling the people, “Don’t let money get in front of everything; money is not wealth – wealth is found in giving.” Some of the young adults attending the planning meetings are studying traditional food harvesting and they welcome the opportunity to learn the old ways from the elders. The two-day conference will begin Sept. 28 in Port Alberni at Maht Mahs. It will feature news and information about traditional foods, offering hands on learning and promoting successful initiatives within communities. Participants may take part in panel discussions, medicine workshops, or they may learn firsthand how to prepare traditional foods. Past conferences had demonstrations on barbecuing salmon, pit cooking, bentwood box cooking, smokehouse tours and more. Traditional foods will also be served to everyone there. Please contact Anne Robinson for more information about this year’s conference being held Sept. 28th and 29th in Port Alberni: firstnationswildcrafters1@shaw.ca

Sign announces Tla-o-qui-aht territory to travelers By Debora Steel Ha-Shilth-Sa Reporter Sutton Pass—It was fitting that young carver Hjalmer Wenstob called up all the kids to help him unveil his new sign on Highway 4. The sign announces to travelers that they are heading into the territory of the Tla-oqui-aht as they journey west toward Tofino. On Aug. 24 at Sutton Pass, Wenstob handed the ropes of the tarp, tied up to cover the sign, to a group of kids who tugged until the sign was revealed. “It was a proud moment,” said Saya Masso. At barely 20 years old, Wenstob is just beyond being a kid himself, yet he has already accomplished a lot in his young life. He’s already carved his first canoe, and has a six-foot traveling totem currently touring art installations. He’s enrolled at the University of Victoria for a visual arts Tla-o-qui-aht citizens gathered around the new welcome sign to the ha’houlthee on Aug. 23. degree, with a minor in Indigenous studies. The sign is located at Sutton Pass and is the creation of Hjalmer Wenstob and family. Continued on page 8.